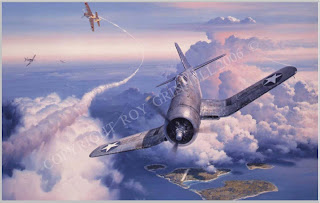 On April Fool's Day 1943 Lt Ken Walsh of VMF-124 was flying a Corsair on Combat Air Patrol (CAP) over the Russell Islands and was soon in combat with Zeros.
"Suddenly a Zero came out of a dive, crossed his bow within range in a right turn. Even as he pulled hard to get a 90-degree deflection shot, Ken Walsh was marvelling at the sheer beauty of the airplane before him. The Zero, with its clean lines, appeared newly painted, a blend of tan and gold . . . handsome!"*
A blend of tan and gold? Intriguing. But this was not just the fleeting and false impression of an aircraft seen briefly in turning combat. Pre-eminent Japanese aviation researcher James F Lansdale has been kind enough to provide some further details about Walsh's encounter with this and other tan coloured Zeros.
In the 1990's Ken Walsh described to artist Roy Grinnell and Jim Lansdale that the color of a "Hamp" he encountered on 13 May 1943 was a "tan color."  He produced a piece of a Reisen 21 manufactured by Nakajima which he had cut from a Zero wreck on Munda airfield in August 1943 and told them that the colour of the relic was the same as the Zero he had seen.  This piece of metal has subsequently been analysed at least three or four times.
Roy Grinnell, who commemorated the Walsh encounter of 13 May 1943 by painting Walsh in battle with a "tan" Hamp ("Zero Fighter Sweep" - the heading image),  compared the actual Walsh artifact to his FS 595B Color Standard deck in bright sunlight.  Roy described the Walsh relic as a visual match to "FS-24201/16350."  Bob Mikesh described the same piece as "slightly muddier than [Munsell] 5 Y 5/4" which Bob said was also "too yellow."  "[Munsell] 5/Y 5/2 equales the lightness." 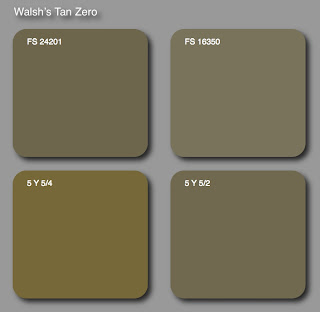 Another report, prepared it is believed by NASM CAL, assessed the artifact's colour as Munsell 5 Y 5.0/2.5.

These colours are shown above, together with the measured value of the Iida Zero artifact from Pearl Harbor and the Tamiya paint XF-76 for comparison. The relationship of all these olive and yellow grey colours should be apparent. Shown also below for comparison and contrast are the colour values for the Gaia paint 211 'Kai Ryoku Syoku', reportedly based on the Kariki 117 'M0' colour 'HaiRyokushoku' (Ash Green Colour), which matches Munsell 7.5 GY 5/2, together with the colour value of the Sweet hobby paint intended for their 1/144th series of Zero kits, 'Grey Green Colour', which is matched to Pantone 5783U. It should be apparent, even to the most partisan observer and notwithstanding issues of saturation, scale and/or metamerism, that these are simply different hues.

Lt Col Lloyd Childers USMC (Ret.) recalls that "At Pearl Harbor on 7th December 1941, and again at the Battle of Midway on 4th June 1942, I particularly noticed the color of the IJN Zeros as a light tan (his emphasis), very shiny or slick."
During the same battle another pilot encountered three Zeros, one of which he described as "ash grey" and another as "a brownish color". After action reports from other US combat crews at Midway describe Zeros as "ash grey", "light tan" and "khaki color".

The combat reports from the war diary of VMF-214 (the Black Sheep) during 1943 are remarkable for containing hardly any descriptions of dark green or grey Zeros. Those enemy aircraft described as "black" may have been painted in the dark, almost black green colours of D0 and D1 but the majority of reports describe brown or brownish aircraft. Zero aircraft encountered on 16th September 1943 were variously described as "dirty brown", "dark brownish green", "brown rust colour" and "brown", together with "plain brown, lighter than others, looked very new". Even on 3rd January 1944 two "Zekes" - Zeros claimed in combat were described as "light brown". What to make of this? When was the last time that Zero models painted in shades of brown rather than dark green or grey appeared on the display tables?
The significance of these eyewitness reports is that the subsequent study of extant artifacts has reinforced rather than repudiated them. The inherent yellowishness or mustard appearance of the paint has to be seen to be appreciated. Perhaps it was just such a description, couched in terms of "mustard", by an unknown aviator to an unknown questioner, that led to the notorious yellow Zero mythology of the immediate post war years - and the early years of Aurora kits? Whatever you make of this, the next time someone is telling you about grey green Zeros, pistachio and vanilla, spare a thought for Walsh's tan Zeros. 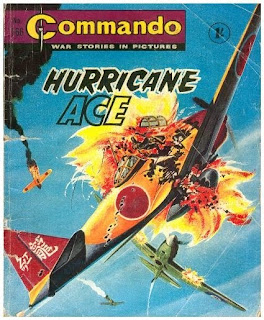 With grateful thanks to James F Lansdale of j-aircraft.com for the provision of additional information and details and to Irene Grinnell for kind permission to include the image of "Zero Fighter Sweep" by Roy Grinnell.
* As reported in 'Whistling Death - The Test Pilot's Story of the F4U Corsair' by Boone T Guyton (Orion Books, New Yourk, 1990)
Image credits: "Zero Fighter Sweep" courtesy of and ©2010 Roy Grinnell ; Rendered colour chips ©2010 'Straggler'; Aurora Zero box art courtesy Gary Wenko
Posted by Straggler 脱走兵 at 08:57