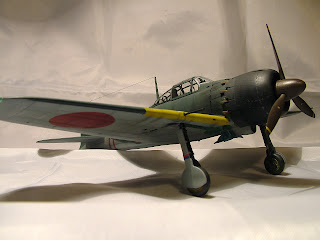 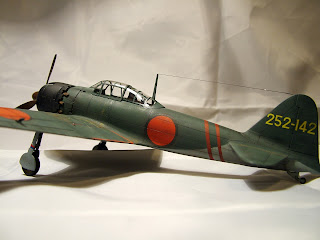 I wish there were more photos to show of this lovely Zero model built by Andrew Hall. At this time only these tantalising two to share I'm afraid. Andrew's enthusiasm and sincere quest for accuracy is amply reflected by the result and he comments on the build as follows:-
"This is the first model I've built of a Japanese aircraft for some time. The last one was, I think, the old 1/50th Tamiya Ki-84 and well over twenty years ago just before I stopped making model aircraft.  As a relative neophyte to Japanese aircraft, I have had just as much enjoyment from reading about the subject as I have building the kit.
The Hasegawa A6M5a itself was quite straightforward though the model seemed doomed to failure, the decals are quite thin and unfortunately the two fuselage stripes folded back on themselves and irrevocably stuck together which meant masking and spraying new ones. As the model was nearing completion I realised I'd lost the pilots seat (later found in another box) and I believe I am on the third rendition of the pitot tube!  The additional detail I added was an ignition loom for the engine and brake lines from lead fly-tying wire.
Regarding the paints used; I used a mix of Humbrol for the green, the 'N1' mix suggested in the old Humbrol Colour System binder which is 77 x 70% and 10% of 80, 33 and 34. In keeping with a fairly fresh aircraft, I then went over the middle of each panel with the mix above but slightly more green. The underside is Humbrol 128 just lightened a touch. The Q1 blue-black for the cowling and under the rear decking is Humbrol 33 mixed with Precision Caledonian Blue, a railway modellers paint probably unknown outside of the UK.  It's a gloss paint so gave a nice sheen to the colour. The propeller and hub were painted in a mix of Tamiya XF-64 and XF-1.
I did want to have the Zero shown in a used but not overly weathered state.  The weathering is lightly dusted Tamiya Smoke, satin varnish for fuel stains and some ground W&N Gold Ochre pastel for a few muddy prints here and there."
Beautiful. And the first of many I hope!
Image credits: Model photos ©2010 Andrew Hall
Posted by Straggler 脱走兵 at 08:59

That has to be one of the nicest built Zero kits I have seen in quite some time....a wonderful job on both the quality of the build and the color choices too. Great job Andrew!
Dan

Nice build, Andrew! The canopy is especially well done. It is good to hear fellow modelers' triumps over adversity, I'm certain there are enough photoetch parts in my own carpet to detail a kit or two!

Thanks for the kind words.

Jeff, more a triumph over clumsiness than adversity in this case!