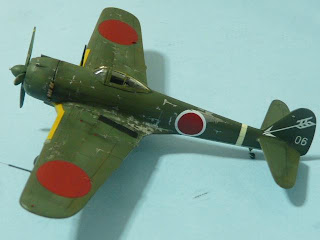 It is with great pleasure that I am able to share images from the Jose Luis Fauste collection of 1/72nd scale Japanese aircraft models. First up, and further to blogging about the release of the Special Hobby Ki-43-III Ko here, are images of Jose's model from this kit, together with his comprehensive build report:- 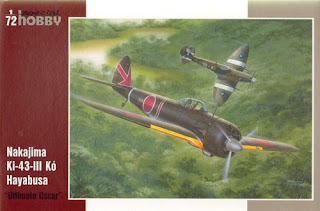 "These comments are also applicable to the Nakajima Ki-43-II variant also available from Special Hobby, as both kits have a lot of common parts, and problems…… 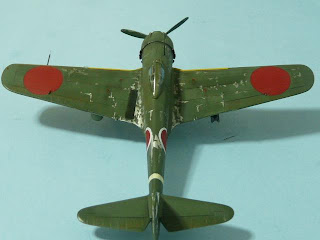 The appearance of the sprue frames in the box is really nice but the assembly of the model brings noticeable problems, mainly in the fit of the cowling parts. The cowling is composed of three pieces, the upper area and frontal ring plus two additional lateral covers which include the thrust exhausts. The fit of these together is very bad as the curvature of the two lateral pieces does not follow the same curvature as the frontal piece; and even worse, as the edges of the parts are not very well defined and are too thick, it is quite easy to remove part of the covers, which means there is a lack of adjustment on the lower side of the cowling. I had to include a plastic shim at the 6 o’clock position to adjust both parts. All this area needed a lot of putty and sanding. 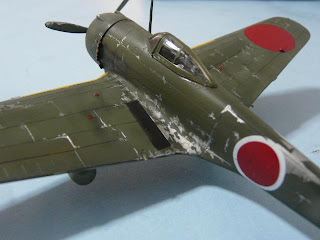 The wing to fuselage fit is also problematic, again due to very thick plastic parts. The fit is bad mainly at the lower rear part and heavy sanding of the thickness of this part of the wing is necessary. 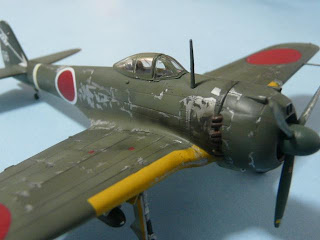 The locations of the wing pylons are not indicated on the kit parts, only a dimension for reference being included in the instructions. Another problem with the attachments of the external tanks is that they appear too large when compared with pictures of the real thing. The difference between the curvature of the tanks and the attachments also impedes their proper installation, so again additional work is necessary to get them to fit. 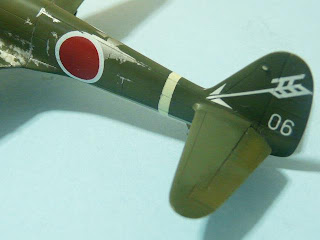 In the Ki-43-II variant kit the lower oil radiator scoop beneath the cowling is formed by two parts and the assembly of these parts against the cowling and wing is bad, very bad; on the Ki-43-III kit this detail has been improved with only one part for the intake. 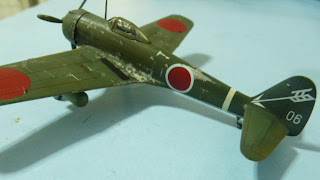 The fuselage assembly is good but with the typical problems of Special Hobby models in locating the engine or the complete cowling onto the fuselage. The fit of the canopy is fair mainly between the two sections. 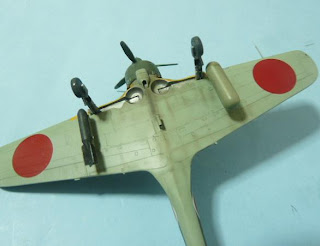 Otherwise the kit and assembly is as for other Special Hobby kits; a good interior (good enough for this scale and aircraft size), very good surface detail, excellent decals (on the model I built I used Aeromaster decals to represent a Kamikaze aircraft - not included in the kit) and a very clear injection molded canopy.  With this kit Special Hobby has introduced location pins for the main parts, but in any case I removed these as the fit is better without the pins - especially at the tail area. 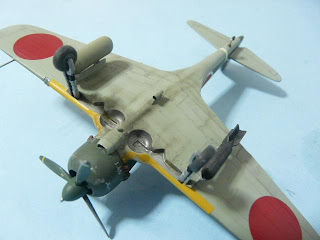 I painted the model with Gunze IJA gray and IJA green, the latter with a lot of variation of hues by adding small quantities of brown, yellow or off white variously in each area. The chipped areas were accomplished by airbrushing Alclad (before painting the green) and by applying Humbrol H11 Silver  with a brush, adding small touches over the green. The propeller was painted with Gunze H302 (FS 43092). The yellow wing IFF strips were painted with White Ensign models ACJ19 . 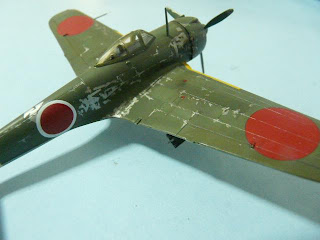 After the completing the painting and decals I airbrushed dirty thinner to reproduce the oil stains and degrading effects around the engine, oil scoop and radiator mainly on the lower part of the aircraft. Finally I applied an overall coat of Marabu matt varnish."
Thank you, Jose, for providing the photos and this useful commentary. Prior to the release of this kit the only available 1/72nd scale kits of the Ki-43-III Ko were the very hard to find (and expensive) Gartex release which included the standard Hasegawa kit with additional resin and white metal parts (we'll take a closer look at that one in due course) or the limited run AML kits which are plastic and resin hybrids. There was also a resin conversion set designed for the Hasegawa kit available from no other than yours truly*, marketed under the short-lived Zhong Kui label. This was an excellent and reasonably priced set consisting of very finely molded resin replacement fuselage (including sidewall detail) and cowling parts which were custom made by an established and expert East European resin manufacturer. It was available with a comprehensive data sheet on the type, including colour information (even actual paint chips) and detail drawings. Unfortunately, the interest and uptake were disappointingly small, precluding any further 1/72 conversion/enhancement kit projects for Japanese subjects. I may still have a few mouldering in the attic if anyone is desperate to obtain one . . .

Looking again at the Special Hobby kit in conjunction with Jose's review and images and comparing it directly with the Hasegawa kit I now notice that the rear section of the canopy is significantly under-sized and not to the correct profile.  It is suspiciously similar in appearance to the rear canopy section on the old LS 1/75th scale Ki-43 kits. It also has a prominent hole in the plate for access to the water-methanol tank spout behind the headrest whereas on the real aircraft this was a spring-loaded flap. A practical suggestion would be to use instead one of the excellent quality and inexpensive vacform replacement canopies by Rob Taurus (who have a good range of canopies for other Japanese types too) which are available from HLJ .
* Straggler, Ochi-Musha, 脱走兵 . . .
Image credits: Box art © Special Hobby 2010; Model photos © Jose Luis Fauste 2010
Posted by Straggler 脱走兵 at 09:59

Hello Nick! :)
Looks as I'm interesting in your Zhong Kui 1:72 conversion for Hasegawa's Ki-43. How I can contact you? :)
Kind regards,
Dmitry aka 'Dimmy'

I wondered what had happened to you! :-) Nice to see you here again! Please scroll down the green sidebar to the right of the screen until you see "Contact 'Straggler'", then click on the "Email me" link underneath.

I'll look foward to hearing from you.

Thanks for making this posting of Jose's fine build. Great work Jose.

Thanks Ken! I completely forgot about the AML kits! I'll correct the blog post accordingly.

I have a general question concerning the Rob Taurus vac canopies.

Anyone used those? Is the plastic clear like Falcon's or is it a typical Czech vac slightly blueish plastic?

I usually detest vacform canopies but these are the best I have ever used. Crystal clear but very strong and easy to cut out. I can detect no blueishness and they are not "soapy" but very crisp. The Ki-43-I canopy is a great improvement for the Fujimi kit and even includes the rivets - the fidelity of detail is superb.

I just checked my examples of the Rob Taurus #72008 vac canopies for the Fujimi Ki.43-I kit in direct, strong, mid day sun light. Both canopies, to my eye, appear to be crystal clear without any tint. Give them a try, I think you will like them. Per Robert of Rob Taurus, he has in his plans vac canopies in 1/72nd and 1/48th scales for the Hasegawa Tojos.

Thanks Nic and Ken.

I'll give them a try.

Nice box art on the Special Hobby kit, though.