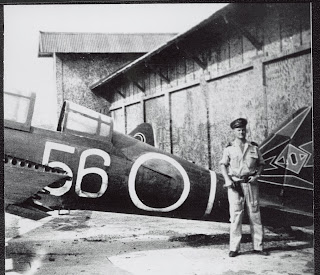 From Jacob Terlouw comes this fascinating photograph of a Tachikawa Ki-55 "Ida" Trainer with very striking tail insignia taken post-war at Kemajoran airbase in Java. The officer in the photograph is sq: off.obs.2nd class Mr Juta of the (Dutch)321 Squadron.
The unit emblem is not one I recognise and the aircraft in the background seems to have a different emblem. I won't draw coloured lines all over the photograph, enhance it, enlarge it, turn it into a negative or resort to any other technical manipulation in order to prove any point about interpreting the colour(s). I'll just let the photograph speak for itself. However I will point out that there appears to be something odd about the rear cockpit position and canopy. Studying the plans, drawings and photographs in the excellent Arawasi Eagle Eye Series No.1 on the Ki-36 and Ki-51 the rearmost section in view does not appear to match the actual rear section of the original canopy (which slid back over the top of the fuselage on the rails seen). The built-up section of rail under the canopy does not appear in most photos and plans. The rearmost canopy section in view does not appear to match the central section either (which usually slid forward). Has it been modified?
Image credit: © 2011 Jacob Terlouw
Posted by Straggler 脱走兵 at 08:01

Thanks to you and Jacob for posting this photo.

Looks like the rear sliding section of a Ki-46-III Dinah on first glance.

What a great photo! Ah, for color film.