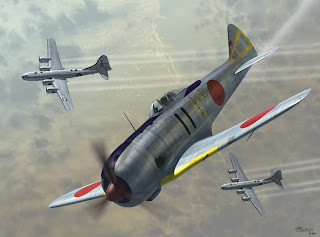 Something of a surprise and slipping in under the radar is the new Sword 1/72nd scale kit of the Nakajima Ki-44-II Shoki ('Tojo'). Shoki modellers have been well-served in the larger 1/48th and 1/32nd scales but in 1/72nd scale until Sword's new release there was only the Hasegawa (possibly ex-Mania) example from 1972 which was considered briefly here in October 2009 (was it really that long ago?). 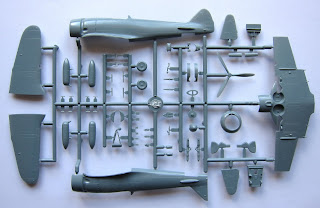 The Sword kit comes in a stout, good quality end-opening box with box art by Jerry Boucher depicting the Ki-44 of 70th Sentai ace Capt Yoshio Yoshida in action against B-29's over Japan. Inside is a single frame of plastic parts, two resin parts, a clear sprue, a decal sheet and a comprehensive set of instructions. There are no photo-etch parts included. All contents are inside a re-sealable plastic envelope and the clear parts are also protected in their own re-sealable envelope. The main parts are molded in a slightly shiny grey plastic with finely engraved detail. The 10 page instruction booklet is excellent with a potted history of the type reminiscent of early Airfix bag headers and clear assembly and painting instructions throughout. 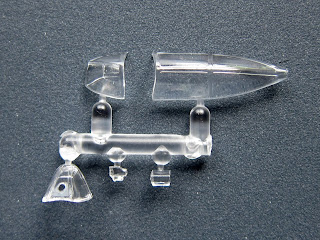 The kit itself appears to allow all three variants of the Ki-44 to be built and the fuselage parts are therefore a compromise, requiring some detail correction in order to depict an Otsu or Hei which are the subjects for the markings options included with the kit. The cowling gun ammunition access panels appear to be more appropriate for a Ko and will need to be enlarged and re-shaped, whilst the gun vents in the upper cowling will also need enlarging. These differences are not addressed in the otherwise excellent instructions. The fuselage halves are molded with integral cowling sides, the shape of which from above looks good, and contain molded sidewall detail for the cockpit. The forward cowl opening and intake is a separate part as are the cowl flaps. The emergency exit doors either side of the cockpit are molded closed but could easily be cut open, a worthwhile exercise as we shall see. Cockpit detail consists of a detailed floor, separate rudder pedals and stick, a nicely molded resin seat, forward bulkhead, instrument panel and separate cowling machine gun breeches. There is also headrest detail to be added to the pylon under the canopy and the coaming above the instrument panel and under the windscreen is a separate part complete with the distinctive apertures. This all seems perfectly adequate for the scale and is certainly a major improvement over the Hasegawa kit's "bathtub" but, for me at least, there is also relief that it is all plastic apart from the seat! 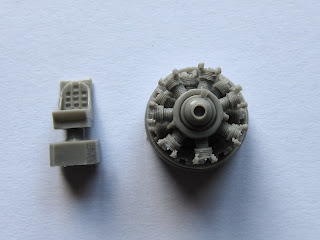 Before the fuselage halves are closed up, there is a fully detailed tailwheel assembly with fuselage rib frame to assemble - very nice this - and a beautifully molded resin two-row radial engine to fit. The wings are conventionally molded with a single lower wing assembly incorporating the forward lower cowling panel with an integral blanking plate for the separate oil cooler. Also included is optional 12.7mm (for the Hei) and 40mm (for the Otsu) wing armament and a clear plastic landing light cover. Although the Otsu is often described as having the 40mm armament as standard this was in fact always considered to be 'special equipment' and the standard Otsu only had the 12.7mm cowling guns and no wing armament. There is also evidence that some Otsu were retro-fitted with Hei-type 12.7mm wing armament. If possible it is better to study photos of the subject carefully before modelling and not to be fooled by the conventional wisdom that all later variants can be identified by the reflector gun sight.
Speaking of gun sights the kit comes with both the reflector and optical telescopic types, with separate windscreens for each allowing the cockpit canopy to be positioned open. This is an excellent feature, further enhanced by the reflector being molded in clear plastic - albeit somewhat chunkily for scale. The spinner and prop is molded in three parts with a backplate. The undercarriage is conventional, consisting of legs, separate wheels and fairings but includes actuating yokes for the inner doors and for the first time in this scale the auxiliary doors for the hydraulic actuating rams in the open position behind the main wheel wells - a welcome detail. The kit includes a pair of drop tanks molded in two halves split vertically each with four separate sway bar supports. 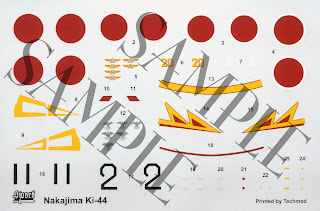 The decal sheet, printed by Techmod, includes markings for two well known 70th Sentai "B-29 Aces", WO Ogawa and Capt Yoshida, both sporting elaborate kill markings, an attractive 40mm armed 47th Sentai example (with addendum decal sheet) and an 85th Sentai example based in China. Recent research in Japan strongly suggests that the 70th Sentai emblems on the tails of both WO Ogawa's and Capt Yoshida's aircraft should be red rather than yellow - although almost all depictions so far have shown the latter. For those prepared to wait my forthcoming Osprey book on Ki-44 Aces, (Aircraft of the Aces 100) to be published in October, includes revised profiles for both these aircraft (and 30 others!). The 85th Sentai example was probably in heavily mottled green and brown rather than the worn green suggested and the figure '4' on the tail was more likely a character rather than a number. White Homeland Defence "bandages" and the white "stripe" on the tail of the 85th example (actually a half arrow) will need to be painted on by the modeller. 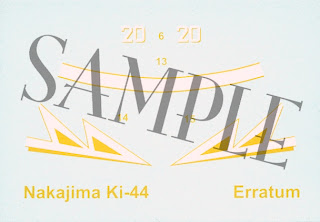 Current price of the Sword Ki-44 kit is £14.99 (about US$24) at Hannants. Bearing in mind the improvements in this kit and its low run nature I think this compares very favourably to the Hasegawa veteran, still available at £9.99 (and without taking into account the cost of resin cockpit upgrades). There will be those who might bemoan the compromise in fuselage detail but it is easily rectified either by re-engraving or by the addition of a sanded down access panel to the correct shape and size. For me, mindful of the scale, this is more than compensated for by all the other details and options which have been incorporated into this kit and I look forward to building this new model of Shoki in a favourite scale. Thanks very much to Milan Lucký for the sample kit box reviewed here.
Image credits: All © 2011 Vision Sword s.r.o; box art also © Jerry Boucher. These images are NOT to be reproduced elsewhere without express permission.
Posted by Straggler 脱走兵 at 10:04

Thanks for the posting and in-box mini review.

Thanks for the review. In my opinion, Sword produces some of the best kits among the array of Czech short-run manufacturers.

I hope it will be as good as their previous Ki-44-II release.