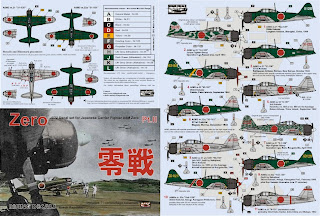 Following on from their first 1/72nd Zero set, Rising Decals have now released Pt.II - with a fine collection of 11 very interesting subjects. Builders of the new Airfix kit are provided with plenty of colour and markings alternatives with no less than six A6M2 subjects, all of them a little different from the usual fare.

22nd Ku A6M2 - RAF Buffalo & Hurricane Dogfight Double Contender
First up an A6M2 from the 256th Ku "Thunder corps" based at Lunghwa airfield near Shanghai, China, the air defence and advanced training unit featured in Spielberg's 'Empire of the Sun' and in the 'Mustangs Over Shanghai' article in Henry Sakaida's seminal 'Pacific Air Combat WWII' from 1993 (Phalanx Publishing Ltd  ISBN 0-9625860-7-2). Personally I am delighted to see 'Rai-120' included, representative of a late-war  China-based A6M2 in a very clean and tidy condition with an interesting tail code. No salt technique needed on this one and the paint was still glossy! The second A6M2 is a camouflaged example from the Junyo carrier group engaged in Operation I-go at Rabaul in early 1943. This aircraft had large, fairly hard-edged blotches of dark green applied over the original factory paint and makes for a very different looking A6M2. Then an A6M2 of the 331st Ku with special Balikpapan air defence tactical markings - the dark green finish broken up by light grey or white tail and wing tips. 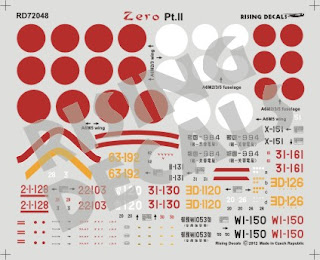 The fourth A6M2 is another I-go Zero from the Hiyo fighter group at Buin during early 1943 and has a mottled green camouflage over the factory paint with red tail code. Fifth up is a 201st Ku A6M2 at Bougainville in 1943, a Nakajima-built Houkoku presentation aircraft depicted in factory paint with white-bordered fuselage Hinomaru and yellow IFF wing leading edge strips. This is the unit the Airfix Zero purports to represent. And the final example, my favourite, is an A6M2 from the 22nd Ku operational over Indo-China and Malaya during the Japanese invasion and a genuine Zero dogfight double contender for those RAF Buffalo and Hurricane models. This one has unusual fuselage victory markings in the form of stylised birds too.

A 201st Ku A6M2
The A6M3 is represented by a Model 32 (square wing tip) of the 3rd Ku - another Houkoku adorned aircraft in factory colours operating from Timor in raids over Australia and therefore of interest to RAAF Spitfire fans - and a dark green Model 22 of the 331st with tactical markings which participated in the joint Army-Navy raid on Calcutta in December 1943 - so another one of particular interest to British modellers.

Ace Sadaaki Akamatsu's 302nd Ku A6M5
Finally there are three A6M5, one of the Peleliu based aircraft of the 263rd Ku with diagonal yellow fuselage stripe and two aircraft of the 302nd Ku in Japan, one the mount of ace Sadaaki Akamatsu with victory markings and the other an aircraft with red and white diagonal fuselage stripe that may have been armed with oblique cannon.
This is a superb set of well chosen markings that breathes new life into an old subject and is especially relevant to the recent Airfix and Tamiya releases. Highly recommended.
Stop Press:- Rising Decals much sought after 'Dying Sun' sheets 72-005 and 72-007 of captured Japanese aircraft are about to be re-released by Max Models. This is very good news for those who might have missed these excellent sheets first time around and stay tuned for further details.
Image credits: All © 2012 Rising Decals
Posted by Straggler 脱走兵 at 10:50

Thanks for this, Nick. I've wanted some of the Rising Decals for ages but have never been able to get them. Now I know! :)

Hello Nick; Thank you for posting, looks interesting and its always nice to see new items in 1/72 scale. Cheers, noel

Many thanks for putting this up Nick - it's nice to see decals for a 3 Kokutai Zeke, though I'm not sure this particular aircraft, X-151, operated over Darwin.

It may have but I haven't any details on it other than a a photo in Hata and Izawa (page 127)with Kyoshi Ito posing with it - he was involved in the 3 Ku Rabaul deployment from September to November 1942 so he may have flown it just prior to that.

It must have been one of the first A6M3s taken on by the unit prior to its redesignation to 202 Kokutai on 1 November 1942.

The topmost but next aircraft on this sheet reminds me quite a bit of a recent restoration which has been taken to task somewhat for not having a realistic camouflage scheme! This is a really great selection of markings, as was the first sheet. Hope they bring it in 1/48. Thanks Nick!

Guess what? Since I reckon I have all the colour info I need from this blog, I've just gone and ordered the 1/72 new Airfix A6M2!