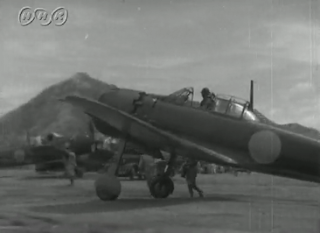 A6M5 returns from a sortie
A link to some excellent contemporary newsreel footage of Zeros defending Rabaul was posted at Hyperscale and Britmodeller. I'm re-posting it here because it is so interesting with many details for the sharp-eyed to appreciate. 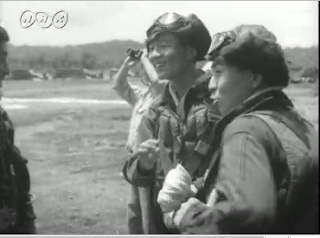 Young Zero pilots enjoy some friendly banter
Check out the RNZAF P-40 filmed at low-level by a Japanese cameraman on the ground. The wing bomb racks on the A6M2. And those fast moving specks around the B-24 bombers (?) in the overhead shots are intercepting Zeros, at one point setting a stream of white fuel vapour or smoke from a bomber wing during the attack. 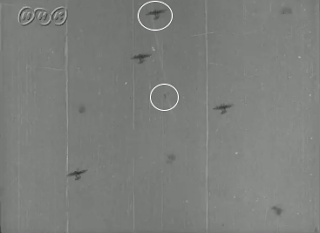 A Zero successfully attacks a B-24
B-25s scud over the surrounding ridges and hills at incredibly low-level pursued by Zeros in shots that bring home the intensity of air combat in a way that still photos or paintings never can. A scene of groundcrew examining combat damage to the wing of a Zero somewhat belies that old chestnut that Zeros disintegrated when hit. 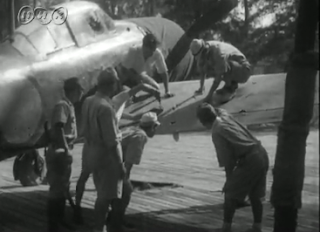 With appreciation to Graeme at Britmodeller for re-posting the link.
Image credits: © 2012 Shogen Archives, Japan
Posted by Straggler 脱走兵 at 10:12

Wow, this is awesome stuff! Noted the weathering is only around the wing roots and other than that the aircraft look relatively new.

When I can devote the time it deserves (maybe over lunch here at work) I will check out the video. The quality of even the stills you've posted is superb!
A window into the past.

Thanks for posting these images.

That is stunning footage Nick! Note after the intercept, how glossy that the finish is on the Mitsubishi built Model 52's as they return. NOT dull and chipped/scuffed to bare metal.

Also on the mentioned Model 21 with bomb racks....lower gear covers removed and carrying 30kg or 60kg air to air bombs for B-24 interception. Can anyone make out that tail code on that individual airframe?

Also, note that even though that was probably field applied dark green paint on the Model 21, it has the same "style" as a Mitsubishi factory paint scheme.

Fantastic, thanks for sharing Nick.

This video is just amazing. A few of the things that stand out for me are:
- the chalkboard with the numbers of Allied a/c; Roman lettering used for their designations
- the ground crew clambering up onto the Zero-sen using the handholds which pop out of the fuselage; never seen them so perfectly
- the B-25s manuevering at effectively zero altitude; mind-boggling
Great stuff, Nick; thanks for posting

Hello Nick; Thank you for posting the link and still images. What a wealth of detail! As noted in the comments, the footage shows off the actual paint scheme of these Zeros very nicely. Keep up the good work! Kind Regards, noel

What an inspiring footage! Feel like pulling the new Tamiya A6M5 (1/72) out of box and start building it straight away!

That Japanese website contains some absolutely mindblowing material. And as you state, this footage alone shows so many details, rarely seen. For scale modellers the sheer glossiness of the Zero paint is noteworthy (at about 8:00) and I found appearance of the New Zealand P-40 quite interesting (at 6:49). The air combat footage is fascinating too of course, and it's amazing to see how close the Zeros get to their targets.

PS. Interesting to see the unit's score for SB2C aircraft almost matches the actual amount lost to enemy fighters during the entire war (which was 17)! Unless of course this score included AAA kills.