Recent sheets issued by Rising Decals include 72-049 Part V of the Emperor's Eagles series featuring a veritable cornucopia of Hayabusa and Hien subjects from the SWPA together with a couple of interesting Toryu that will make a change from the more well known Homeland Defence subjects. The sheet offers markings for no less than 10 Hayabusa I and II from seven different units and 6 Hien from four different units as follows:- 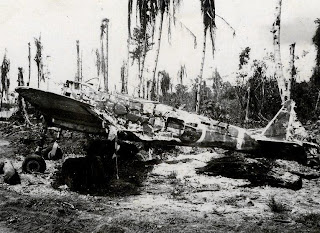 Plus two Toryu as follows:-

Sufficient Hinomaru are also included for two Hayabusa, two Hien and one Toryu. This is an excellent sheet offering interesting and much needed subjects which will provide for an enjoyable interpretation of the diverse schemes and colours shown. 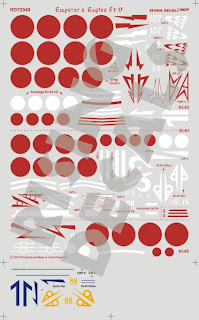 The most common colour schemes for Hayabusa operating in SWPA were either plain dark olive green - (緑色 midori iro) IJAAF paint standard colour # 21 - (approximately the "Nakajima Green" of hobby paints) or nmf with various green and/or brown mottles applied. Several units painted "kumogata" (雲形 - cloud shaped) segments of a yellowish or orange brown over the green to better suit the topography of the theatre, usually matching the "dry grass" ochre colour (枯れ草色 - karekusa iro) IJAAF paint standard colour # 30. The 248th added this colour as large irregular  patches on some aircraft, in one case with the whole tail area painted brown. This colour could appear as a slightly more greenish looking ochre or towards a slightly more orange brown that was sometimes referred to colloquially as  "kaki iro" (柿色 - the colour of a persimmon) and might indeed have represented IJAAF paint standard colour # 31 ( カーキ色 - khaki iro). Typical ranges for these two colours are shown here but don't sweat it as both showed considerable variation as well as the different batches of paint fading and degrading to different appearances. Although not included on this sheet the 1st Sentai in Indo-China used a low contrast camouflage scheme of dark olive green with tea colour "kumogata" - a darker, more reddish brown - prior to moving into the New Guinea theatre. I don't know whether the yellowish-brown ochre camouflage was subsequently applied to some aircraft with this scheme but it would make for an interesting three-colour possibility. 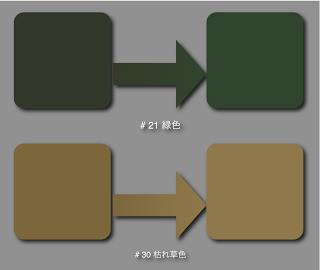 When LAC Morton of the RAF recorded his impressions of abandoned Japanese aircraft found on the satellite airfields at Meiktila in Burma for The Aeroplane Spotter in February 1946 he noted the predominant Hayabusa II colours as follows:-

"Fantastic colour schemes and markings were noticed - two were actually seen with plain yellow roundels on wings and fuselage. No sign of red paint could be detected beneath the yellow. Sixty per cent of those lying about were coloured silver and green. Twenty per cent light green on upper surfaces with light grey undersides, and the remaining 20 per cent in many different shades, tones and mixtures of light green and brown."

The reference to light green is interesting and suggests perhaps badly degraded # 21 with only the chromium oxide pigment surviving to an almost pea green colour which is quite typical. LAC Morton also usefully confirmed the predominant  interior colour of the Hayabusa II:-

"In common with most Japanese aeroplanes seen, the three Oscar 2s had a yellowish green finish all over the interior." 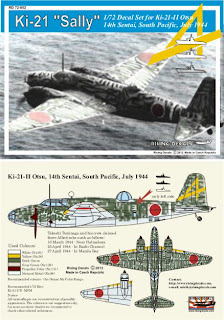 A small sheet 72-052  for a single 14th Sentai Ki-21-II has also been released by Rising Decals. This aircraft was flown by Takeshi Tominaga and featured three victory symbols for submarines claimed as destroyed. Colour scheme is dark green snake or palm frond weave over natural metal. The sheet consists only of the tail marking, victory symbols and white senchi hiyoshiki fuselage stripe without any Hinomaru. It is recommended for the MPM kit which is not that easy to find and a reminder that there is still no mainstream, 1/72nd scale injection molded Ki-21 readily available. A remarkable situation when kits of very obscure types are available.

With thanks to Mirek of Rising Decals for providing review samples of these sheets.

Thanks for the notice on this sheet, Nick.