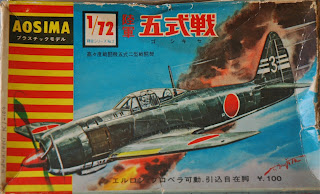 When I briefly ran through the Aoshima range of kits here and here I deliberately omitted any examination of their only Army subject - the Kawasaki Ki-100 Goshikisen - as I planned to cover it with a dedicated blog. The recent blogs on Ki-61-II Kai and Ki-100 models provided the catalyst to finally get the box art images done. This kit was released originally as No.2 (following the A7M2 Reppu "Sam") under the Aosima label (same company) in 1964, simply as Rikugun Goshikisen (陸軍 五式戦 - Army Five Type Fighter) in a Japanese language box with no English. The box art depicted the tail marking of the 3rd prototype Ki-100-II (with the turbo-supercharger) but the artist seemed to think the port wing root intake was a landing light! The kit itself was very simple, with only 21 parts and a very basic decal sheet providing six hinomaru only. Re-issued over the years with various new box arts, Aoshima's Goshikisen is, rather incredibly, still available from the same company today, 48 years later. 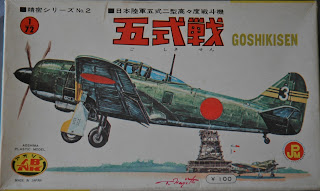 Aoshima was founded in Shizuoka city in 1924 as the Aeroplane Research Institute and began making model aeroplanes for schools in 1929. The founder of the company Jiro Aoshima was the chairman of the Shizuoka Model Aeroplane Association. In 1945 the company was established as Aoshima Bunka Kyozai RL making wooden model aeroplanes. In 1961 with Ichiro Aoshima as CEO the company began making its first plastic construction kits. The range of aircraft kits has always been relatively small and nowadays the company is perhaps better known for its range of model cars and 1/700th scale waterline warships. 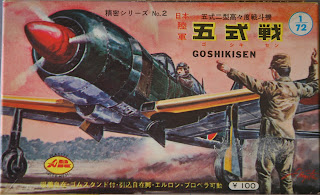 Although the Aoshima Goshikisen has the wing root intake and the plain cowling with no carburettor air intake it lacks the turbo-supercharger and the oil cooler is replicated in the central position of the Ki-100-I rather than offset to starboard as in the Ki-100-II. The Aoshima Ki-100 is continuously confused by modellers online for the Fujimi (and Fujimi-Bachmann) Ki-100 (to be examined later) but the kits are actually very different in both engineering and their completed appearance. The Aoshima kit has a single-piece canopy which is overscale and too deep, sitting on top of the fuselage rather than following the cowling panel line. Leaving aside the typically clunky Aoshima moulding and vintage features such as the "peg and pilot" cockpit interior and gaping wheel wells, this is probably the most detracting feature of the kit which otherwise shapes up pretty well - considering its age. 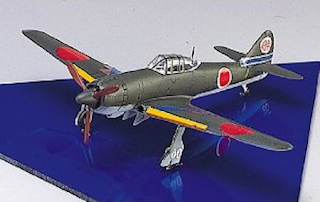 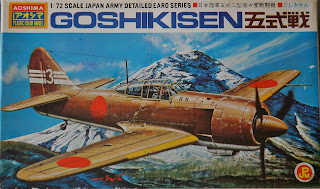 Another issue with the kit's appearance is that although the cooling slots are represented the rectangular fairings behind the exhaust outlets conform to the outer fuselage contours rather than being correctly recessed. Unlike many kits of that era, however, an attempt was made to give the cowling the correct, slightly bulbous shape in plan view rather than the usual tapering effect. The ailerons are separate parts, intended to be movable and the undercarriage is also designed to retract - although there is no provision for the small inner doors to close. The kit includes a stand support but no base, this being originally intended to fit into a rubber suction cup which might have been available separately. At least I have never seen one included in a kit box. 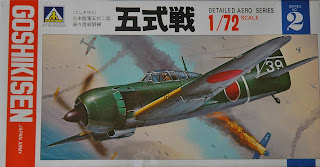 The latest issue of the kit in the "WWII Wings" series identifies the aircraft as a Ki-100-II for the first time and includes an extended decal sheet with markings for the 3rd prototype, ace Maj Yohei Hinoki's Akeno 111th Air Regiment, and a somewhat eclectic selection of insignia including Manchukuo roundels! Considering its age the kit is still quite cleanly moulded. Is it worth building today? That probably depends on your attitude to modelling and the extent of your nostalgia - and quite possibly your sense of humour too. There is no doubt that improving the appearance of this kit is a labour of love, a lot of fun and possibly quite barmy! 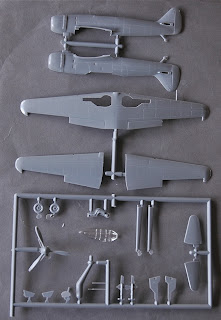 Basic Kit Parts - not to be confused with Fujimi! 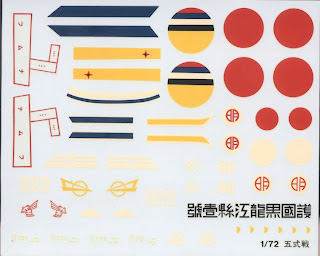 Thanks for the box top round up, Nick. I had seen only two of them.

Hello Nick; Thank you for posting these images. The vintage box art is very evocative. It was box art of this type that helped to fuel my long standing interest in Japanese military aviation so many years ago. Kind Regards, noel

Hello, a very interesting post. Is it possible to say which box art came first? have you posted them in date order? Thanks. Sean

Hello Sean. Yes, the box types are shown in their chronological order as far as can be ascertained but I can't guarantee that these are the only ones!

Hi! I struggled with the building of the last issue some time ago! (I know that there is a new tool now, and I'm looking for it anxiously)
Regards, Gustavo

I bought an Aoshima Hawker Hurricane box... and found the Ki-100 kit inside it! The decals seem to be in good order, 40 years after they were packaged inside a crinkly cellophane bag with the sprues. Let's see how it looks when I get to build it!