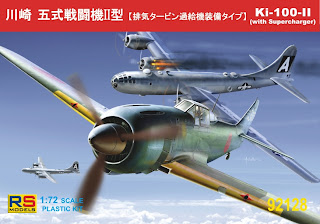 To the best of my knowledge there has only been one mainstream injection model of the Ki-100-II in 1/72nd scale, together with a Ki-100 Otsu kit that offered the parts for one in a somewhat covert manner. Of those two veterans, which often get mightily confused on forums, more anon. But for now RS Models new Ki-100-II has arrived here in the mountains at Schloss Nachzügler and I'm waiting for the Ki-100 Ko and Otsu from the same manufacturer. I've always been interested in Japanese experimentals and have a long running line-up of Kawasaki's design and development achievements including foreign influences (so long running that I've started re-building the earlier efforts to improve on their quality and my Merlin Ki-32 which was started several decades ago is still not finished). 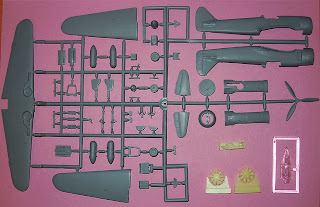 This otherwise injection moulded kit contains resin in the form of a two part engine (the prop reduction gearbox is a separate plastic part) and the turbo-supercharger assembly (the frames pic above is from the RS Models site). But the kit I bought also contains a pair of resin exhaust outlets and for some odd reason the flat panels to their rear even though those are already moulded as part of the fuselage halves and seem perfectly adequate as they are. The instructions do not show these - or the resin exhaust outlets! The wing root turbo-supercharger air intake is also a resin part that looks like it might be fiddly to instal. I tend to have alarums and excursions on seeing resin parts, not being a fan of superglue, and I'm sure this Pavlovian reaction impedes objective judgement when it comes to assessing a kit.  The cowl ring appears to be standard to all the kits and requires a recess for the redundant carburettor intake on the top to be filled. Extra plastic parts are a new forward fuselage top insert (without the carburettor intake) and a new lower fuselage centre section with recesses for the turbo-supercharger assembly and offset oil cooler. The all plastic cockpit interior reassures me, consisting of moulded-in sidewall detail, detailed floor, forward and rear bulkheads, two-part seat, stick, engraved instrument panel, separate gun breeches and a gunsight.  The one-piece canopy is injection moulded, albeit with a rather shallow looking windscreen. Comparing this canopy to the Fine Molds kit canopy and to photographs and plans it is clear that the windscreen is too small and the rake back angle too shallow.  Fortunately the Falcon IJA vacform canopy set contains two excellent Ki-100 bubbletop canopies that could probably be adapted to fit.  Part # 8, the razorback fairing under the rear canopy with the twin lightening holes, included but not required, will prove useful if you plan to improve the Nichimo Ki-61-II Kai! There are three markings options on the well-printed decal sheet included in the kit, the first being for the actual 3rd prototype, then an imaginary Akeno 111th Sentai Homeland Defence fighter in unlikely natural metal finish and finally a captured ATAIU-SEA example with the equally unlikely IJN tail code 'B1-21'. This code was applied to a Zero of Air Group 381 in the Singapore/Malaya area so it stretches the imagination even for a 'what-if'. 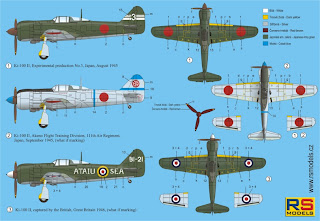 The undercarriage parts are neatly moulded with nice inner detail on the main wheel covers and separate retraction yokes for the small inner doors. The prop is a three-part assembly and has a backing plate for the spinner. And finally there are a pair of underwing racks and droptanks. The Ki-100-II was a remarkable aircraft and deserves inclusion in any IJAAF collection, being the lightest turbo-supercharged fighter of WWII and testimony to the design and adaptability skills of the Japanese aircraft industry. The efficient turbo-supercharger installation drew on experience from Kawasaki's Ki-108 and Ki-102 Ko projects and the overall design achievement makes an interesting comparison - and contrast - to the heavy Nakajima Ki-87 and Tachikawa Ki-94 projects. For "what-if" fans it offers potential in terms of speculative markings far beyond those offered in the kit. In total three prototype Ki-100-II were built with the third being photographed in a damaged state at Kagamigahara after the war. Sadly it was not preserved. 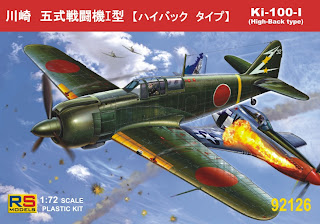 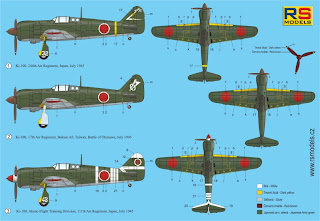 The Fine Molds Ki-100 duo from 2001 (was it really that long ago?) did not include the Ki-100-II so the RS Models release is welcome, but the standard Ki-100-I razorback (markings options for 244th, 17th and 111th Sentai) and bubbletop (markings options for 111th, 5th and 2 x 244th  Sentai) shown here are puzzling additions. They retail for approximately £15 each whereas the Fine Molds examples may still be had for under £12 each direct from Japan. Perhaps the marketing is based on availability in Eastern Europe or the high price of the Fine Molds kits from Western retailers (often in the £18-£21 bracket)? More on these when they arrive and some discussion of Ki-100 colours. 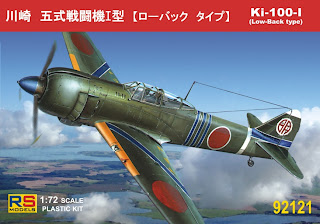 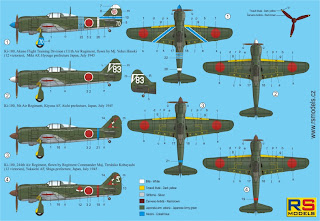 RS Models Ki-100-1 razorback and bubbletop models now received. As expected the only resin parts in these kits are the two row radial engines. The razorback canopy appears to have the same windscreen issue as the bubbletop. Decals look very good, especially the 111th Sentai examples. I have added the markings options above. Bubbletop has markings for aces Maj Yohei Hinoki and Teruhiko Kobayashi together with a mysterious, unidentified fourth 244th Sentai option with "shamrock" artwork.

Thanks for the notice on these kits, Nick.

"I tend to have alarums and excursions on seeing resin parts, not being a fan of superglue"

I'm glad I'm not the only one on the planet as feels that way! That goes double for photoetch and other metal parts.
Give me good old polystyrene any day.

Thanks for the review, Nick; it's one I need in any case.

Very informative post Nick! Thank you for your efforts and keep up the good work you do with your blog. Kind Regards, noel