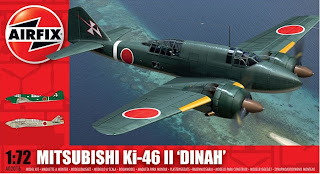 The venerable Airfix 1/72nd scale Mitsubishi Ki-46-II "Dinah" recce-twin is due to make a re-appearance during 2013, complete with two new warpaint options. This is a good but simple kit of a fine looking subject and a welcome re-release, although I understand that there has been no revision or updating of the mould. Hopefully some of the aftermarket boys will dip their toes in the water and provide a pair of accurate spinners and props to replace the kit's un-typical items and perhaps if we are really lucky new cowlings and separate engines. Airwaves already market a photo-etch set for the interior (shown below) which includes flap details. 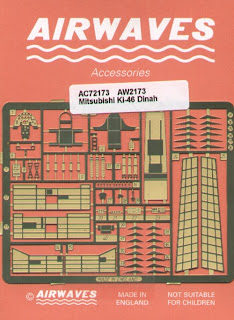 The beautifully moulded Hasegawa kit, quite hard to find now, suffers from a slight hump-back shape that spoils its looks and if it re-appears in the UK again will probably be prohibitively expensive. The LS Ki-46 series now marketed by Arii and still available from Japan at a very competitive £6 is another good kit but trickier to assemble due to the provision of different versions, the nose joint in particular being difficult to disguise and the position of the pilot's seat to windscreen and instrument panel problematic. Another issue with the LS Ki-46 family, although it doesn't affect the Ki-46-II, is that the Ki-46-III makes no provision for the larger engine cowlings of that version. The engines and cowlings are the same in all the kits. What you get in effect is a Ki-46-III fuselage married to Ki-46-II wings and engines. The Airfix Ki-46-II, picked up from your LHS and with a little work and TLC, including re-scribing panel lines if that floats your boat, will still put a good looking model of this charismatic twin on your desktop.

Also of potential interest to Japanese aircraft modellers in the UK, Humbrol are expanding their range in 2013 and bringing production back to the UK for quality control purposes. RLM 02 Grau (Matt 240 in enamel and acrylic) is included in a new series of 13 welcome Luftwaffe colours which, going by the colour chip on their website, might be useful for the Ki-46 kit as well as their recent A6M2! Also due from Humbrol is a new series of enamel washes and weathering powders.

Hi Nick,
The Ki-46II is such a beautiful aircraft, it's good to see so many kit options in 1/72. Hoping against hope that modelers will see a new 1/48 kit sooner rather than later!

An early Merry Christmas to everyone here as well!
Dan

Thanks for this posting. I saw the news just today, and was hoping against hope that it was a new tool since many of their new releases are following that MO. Alas, it's not. However, at least it's back giving us more choice for that particular a/c.

Veering off topic just a little...it is great to see this classic back in circulation. I'm sure this was the first Japanese multi-engined a/c kit I built as a kit, and to say it planted a seed would be an understatement.

But while on the subject of Dinahs, I do want to plug the old LS/Arii kits. They are not at the level of the Hasegawa ones, and as Nick briefly mentioned, you have to be be careful to be sure you have the right bits for the desired variant in hand.

But they are otherwise accurate, fun to build, have crisp exterior detailing, and here in the US at least seem to be eternally plentiful and cheap residents of model shows, swap meets, and hobby shop back shelves. And the nifty interlocking wing tabs producing fail-safe dihedral alignment are an idea others would do well to emulate!

Thanks for posting the new box art, Nick.