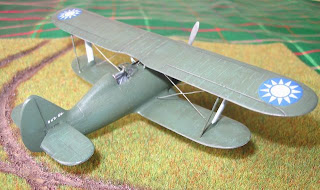 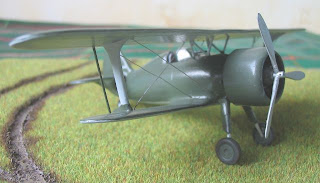 
In the late 1930’s it became increasingly difficult for China to buy modern combat aircraft abroad as war clouds were gathering every where. Although established in 1928 what was to become the No.1 Aircraft Factory at Shiukwan (later Shiuchow), about 125 miles north of Canton, had so far only assembled and maintained foreign designs (including about 30 Curtiss H-75M Hawks). However, after the factory was evacuated to a valley about 7km west of Kunming (in October 1938) a Polikarpov I-15bis was modified there in 1939 (possibly using spare parts) by its Assistant Chief Engineer (designer) Constantine L Zakhartchenko to become the prototype for the Zhông 28-B. This factory had modern buildings, American machinery and about 400 mechanics and engineering staff. As aero engines were as hard to come by as complete aircraft, it was decided to use spare engines, complete with 3-blade props, left over from imported Curtiss Hawk III’s to power the aircraft. The M-25B engine of the original I-15bis was in fact a development of the Wright Cyclone that powered the Hawk III, so it was thought this engine could be adapted without too many problems. The Cyclone had a different exhaust arrangement though, which necessitated a redesign of the cowling. The streamlined spads of the main wheels were deleted and the tailskid of the I-15bis was replaced by a tail wheel. The top wing was simplified by straightening the leading edge. The lower wing was equipped with ailerons which were linked to the top wing ailerons by a rigid strut. The armament of four fuselage mounted 7.62mm machine guns remained the same. Although the Zhông 28-B was very similar in appearance to the I-15bis, its performance was not as good. The redesigned cowling was less aerodynamically refined and the empty weight of the 28-B was over 100kg heavier than the I-15bis. In total only some 30 machines where built and used mainly as trainers. By 1943 none remained in service. 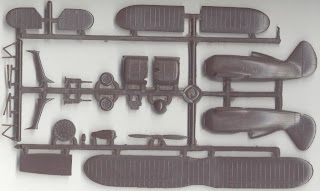 "The I-15bis kit came bagged with header card and was one of the first batch without decals moulded in the same hard, dark brown plastic that MPM used for their first kits. Later issues of this kit included a small decal sheet with Chinese markings and were moulded in grey or white plastic. The quality is pretty good, there is hardly any flash and there are no sink marks or nasty ejector pin marks. Surface detail is partly raised and partly engraved where appropriate. The tiny vacuform windscreen comes with a spare. The header card contains a single exploded construction diagram and a 3-view scale drawing. A nice touch is the list of publications where reference material can be found. 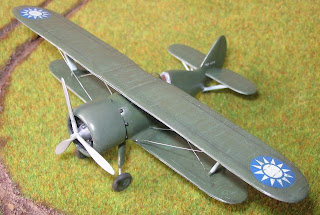 "Dimensionally all measurements are within a mm of what they should be. Surface detail is pretty accurate and looks convincing. The shape of the wing tips isn’t quite right though. While the main wings should have more rounded tips, the elevators should be a bit more elliptical at the tip. This was easily rectified with a swipe of sand paper. Sadly the prominent spads of the earlier I-15bis are not included in the kit. To convert this kit into a Jung 28B some changes had to be made, which will be described during construction. 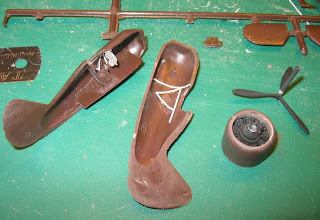 "After sanding the mating surfaces of the fuselage halves flat, I started work on the cockpit. There are only a seat, floor and instrument panel in the kit. I ditched the instrument panel and replaced it with something more suitable from the spares box. The floor needed quite a bit of trimming to fit at the right place. I added scratchbuild rudder pedals and a ring type control column. The cockpit side walls got a bit of structural detail made from evergreen stock profiles. The seat was fitted out with belts and then installed. The fuselage was now closed and left to dry while I turned my attention to the cowling.

I glued the halves together with cyano and then removed all surface detail. As the Jung’s cowling was shorter, I removed about 1.5 mm from the rear end. I then thinned down the rear edge. As the engine was covered by a shutter plate on the I-15bis, there is no engine included in the kit. I found a suitable 9 cylinder engine in my spares box and trimmed it so that it fitted inside the cowling. Next I made 9 new exhaust stubs from contrail rod. To get the new engine/cowling assembly to sit right, I added a 3.5mm spacer to the fuselage. 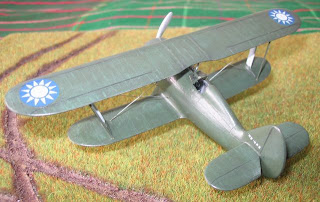 "The wing tips where rounded off a bit more but I left the elevators as they where. The lower wings where now glued to the fuselage using a jig to ensure the correct dihedral. After these had thoroughly dried I attached the interplane struts once again using a jig to ensure the correct angle. Once this was dry the top wing was added. Then the struts between the fuselage and top wing were inserted. They fitted perfectly at the rear but at the front they are about 1 mm too short. I filled the gap with a drop of wood glue and this worked wonderfully. Using pictures of I-15bis, rigging wires were added. Looking again at a picture of a 28B I noticed the lower wing ailerons and the straight leading edge of the top wing. B***er!!!... I managed to straighten the leading edge with a strip of plastic and filler, and sanded it back in profile without breaking anything. But I decided that scribing the aileron hinge lines in the lower wing would be asking for trouble. So I settled for just adding the link rod between the upper and lower wing and left it at that.

The tail wings with their struts were now added. After this had dried the landing gear and a tail wheel from the spares box where added. The windscreen frames were painted and the hole for the telescope sight was drilled. It was then cut from the backing sheet. After a few swipes with sand paper it fitted well. Before glueing it on, a scratchbuilt gunsight was added. I then painted, decaled and weathered the model. When I was satisfied with the look, I added the engine, cowling and prop.

"There are no painting instructions whatsoever with the kit. For the interior I used aluminium dope, which was pretty much the norm for aircraft interiors in the thirties. The seat was painted primer grey, with leather brown back and head rest. The instrument panel was painted black and dry brushed with white to bring out the details. The engine was painted in various shades of metal. The prop was left in bare aluminium. The upper surfaces received an olive green coat while the lower surfaces were painted light blue. The wing ribs where dry brushed with a lighter green to simulate wear and tear on the fabric. The roundels came from AV Usk decal sheet #7133 (Chinese fighters).

"For a long time the Aviation Usk kit was the only game in town. It has now been superseded by the more detailed ICM kit. However it is not a bad kit, and with a little effort it builds into a nice replica of the I-15bis. Due to the low part count and the good fit of the parts I recommend it to those that want to have a go at a first short run kit. For conversion to a Jung 28B it forms an ideal base. It is an easy conversion that can be done by every one that has a few older kits under their belt and an interest in Chinese aviation."

* The aircraft is variously romanised as 'Jung' or 'Chung' in many references but the modern Mandarin Pinyin romanisation for 忠 is Zhông which to Western ears sounds like 'Jung'. It is one of the four Confucian moral injunctions for men, now usually translated simply as meaning loyalty (to a monarch or lord), the other injunctions being piety to one's parents, respect for one's older brother and faith to one's male friends. However, the early meaning of this character is more complex, implying a straightforward and selfless dealing with one's superior even when this might mean having to disagree with him. One modern interpretation proposed by Paul R Goldin is “being honest with oneself in dealing with others”. So it does not mean a blind or self-serving loyalty.

Thanks for sharing your very fine work with us, Johan.