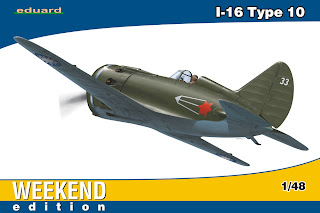 Way back in September 2009 the I-16 aircraft of the Xinjiang (Sinkiang) Aviation Unit were described in this blog here. Eduard have recently released a 'Weekend Edition' of their very neat 1/48th scale I-16 Type 10 featuring an aircraft of this Chinese autonomous region unit. There is no explanation on the box or instructions other than the description "Sinkiang Aviation Unit, Dihua airfield, China, 1941-42" so there might be some head scratching, or maybe it will just be assumed that this was a RoCAF unit. 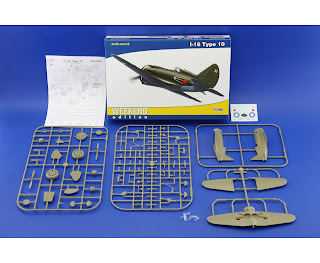 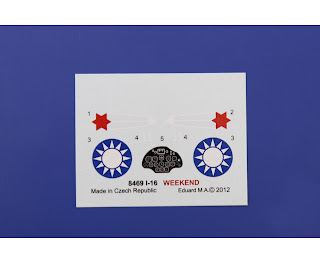 On the simple decal sheet the six-pointed star is printed red which is a better choice than previous depictions of white but the probability is that it was actually yellow. From 1934 to 1942 the Xinjiang flag had a yellow star central on a red field but after 1942 the flag was yellow with a red star in the upper left quarter. The aircraft markings are as shown during their induction ceremony into Kuomintang service so might have differed when the Xinjiang Unit was actually training CCP flyers. I presume the finish was Soviet factory colours (!). In the photograph one aircraft at least appears to have the dark painted cowling.

Indeed these I-16s were delivered in factory camouflage colours and probably not repainted. The factory colours for the I-16 type 10 consisted of AII Z olive green (nitro) top colour and AII gloss light grey (nitro) and AE-9 light grey (oil) for the undersides, the latter used on the fabric/wooden parts. The difference between the latter colours is very minor. Any type 5s may have had black painted cowlings.

Interior was said to be A-14 steel gray, but the I-16 that defected to the Japanese in late 1939 clearly had a brighter interior colour, I'm guessing AE-9.

This is what I gathered from my research on I-16s while creating the Ki-27 Aces cover art. I also discovered that Soviet colours are an even bigger minefield than Japanese ones...

With regard to the Eduard I-16 kit, I built the type 17 version and can say the kit is very nicely done and accuracy is pretty good. Definitely recommended and undoubtedly much better than any other I-16 kits in this scale.

Thanks Ronnie! I stepped on a mine in that minefield recently. I think it was Finnish. ;-)

Thanks for the proposed corrections to the kit's markings. Please consider posting articles on the scope of Soviet aviation aid to China in the mid 1930s. Is such info publicly available now?