Opportunities to Model the A6M ~ Fifty Years Ago! 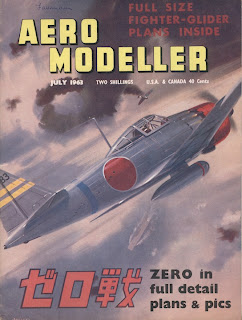 Fifty years seems like a long time but 1963 was only yesterday for some of us TOF's. Even so when I look around now that particular past was indeed a foreign country! This issue of Aeromodeller magazine from July 1963 featured the Zero "in full detail plans & pics". The specially commissioned cover art was by Lawrence Bagley (1922-1983), a one time civilian Technical Illustrator at Royal Navy Portsmouth shore station HMS Vernon who freelanced in marine and aviation paintings.  The caption notes that whilst  "Not normally a colourful subject, we have gone to some trouble to find the brightest possible authentic decoration for a Zero." Apart from the ubiquitous red cowling of the time the scheme appears to be of one of the early China theatre Zeros but applied to an A6M5 and taken from an in-flight photograph of an A6M2 which appears in the magazine (see below). It still conveys an accomplished if delicate technique and the charm of so many of those covers, some of which were the work of C. Rupert Moore A.R.C.A. , which may be compared and contrasted to the ultra realism of computer generated artwork on the covers of modern modelling magazines. In the days before widespread colour photographic publishing, prolific profile vehicles and the image overload of the internet they were nothing short of inspiring. 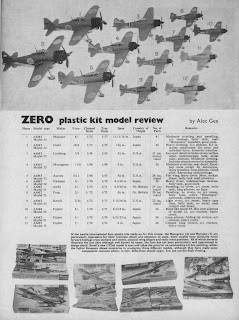 Although this venerable Model Aeronautical Press Ltd (MAP) magazine was more usually focussed on flying scale topics there is an interesting summary page of the then available A6M plastic kits by the late Alec Gee which is reproduced above. Most of the kits briefly reviewed are well known old stagers some of which have been around until quite recently masquerading as respectable and fooling the unwary but the trio of Fujimi boxings shown at the bottom of the page are new to me in terms of their box art. The box art shown bottom right of the quartet appears to be the same illustration that adorns the instruction sheet in an early A6M3 kit in my collection. 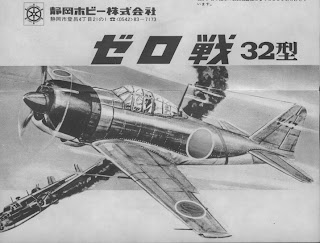 But curiously whilst the box in the photo appears to bear the Fujimi logo, mine, which I had assumed to be an earlier issue, is labelled only Shizuoka Hobby without the Fujimi name appearing at all, although it has the distinctive trademark ship's wheel. It is also marked as being to 1/72nd scale. The box art is much better too, although the artist is unknown, and the box design is similar to the earliest imported Hasegawa boxes with a Japanese flag. The kit inside is identical to those later imported in Fujimi-AHM and Fujimi-Bachmann boxings with K Hashimoto box art. 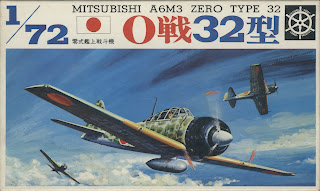 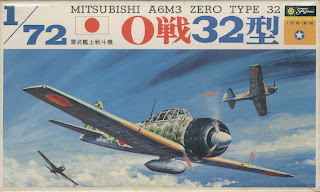 The Fujimi Zero kits of this era were little more than toys and it is apparent that the toolmakers intended them as such. They are characterised by an absence of panel lines, prominent rivets, ill-defined shapes, cylindrical cowlings and shallow canopies. The masters appear to have been carved by eye without reference to plans or dimensions and the box art by Hashimoto-san managed to capture the form of the aircraft far better than the master and toolmakers. Of course this harsh judgement is made with hindsight and exposure to the improved quality of kits over fifty years. I can't really assess how these kits might have been received in the context of 1963 other than that they appear to be more basic than the Airfix kits of the time. 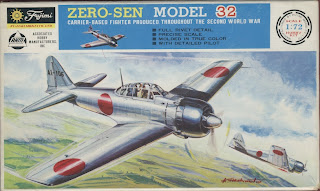 The Shizuoka Hobby A6M3 kit shares one characteristic with early LS Zero kits, which is that the plastic is moulded in the "correct" colour - a slightly amber grey-green between Munsell 5 GY 6/1 and 10 Y 6/1. I like to think that this might be more than just coincidence. The colour is very close to that chosen for the recent Fine Molds A6M2 moulding... 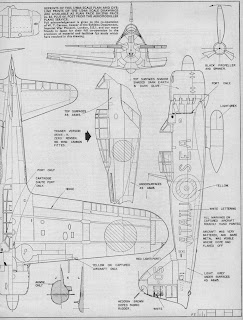 Also included with the Aeromodeller article on the Zero were 1/48th scale plans drawn by D H Cooksey whose notes demonstrate a slightly less than firm grasp of A6M type development. The colour notes for the ATAIU-SEA B1-05 are still fascinating however and the reddish brown doped rudder seems just too precise and convincing a detail to have been plucked from nothingness or even wishful thinking. There are some even more bizarre applications of red oxide dope and primer to share with you but those can wait for now lest the horses get too scared...

Thanks for posting this data, Nick.

Doesn't that bring back memories! I recall those first Zero kits and the magazine - I had quite a collection back then.

And of course back in those prehistoric days we all knew that Zeros had red cowls...

Cheers and thanks for this memento.

Amazing! I have a Fujimi A6M3 Type 32, the "One Hundred Series No. 2", that I bought not a long time ago in Buenos Aires as an oddity. Box art shows a dramatic scene, with a Zero's pilot looking at his 7 o'clock in the foreground, and two Hamps that seem to be in a collision track with this! It is very interesting that the instruction sheet shows the same picture as the "Instruction sheet from Shizuoka Hobby # 2" but with the old Fujimi fonts. I'll send some pictures by e-mail.

I do remember Aero Modeller magazine but I kept none of 'm.
Built some of the kits in the Zero plastic model review,
the 1/48 Monogram one(good) , several Frog ones(not that bad) and the Airfix Zero (not as good as the Frog kit in my opinion).
Was it not Mr John Stroud who showed us the first(?)
image of a Tainan Ku Zero with a red cowling?
I've never seen those early Fujimi Zero kits in the Netherlands in the mid-sixties, the Japanese kits available then were the first Tamiya ones and the LS
Zero's.

Thanks Nick for showing this ones.
regards,
Jacob.