Something More About Mary ~ Update 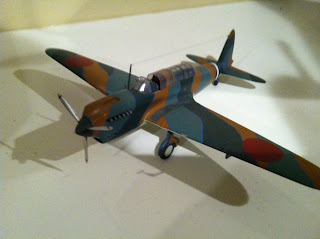 Back in December 2010 there was a brief run through of Kawasaki Ki-32 'Mary' kits (scroll down) with a later update in June 2012 to add the Try Angle 1/48th scale resin kit. Now Tom Draper of Indiana, USA has kindly sent an image of his model of 'Mary' (above) that won a special honourable mention in the single engine injected class (not the vacuform class) of the 1982 U.S. IPMS Nationals and was made from the Eagles Talon vacform kit, not mentioned in the original blog. Thanks to Tom I have now added this one to the list of Ki-32 kits! 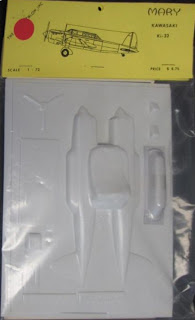 Eagles Talon was originally started as Vacplane by Michael Majer in southern California in 1979 but only one kit was released under that name before it was changed to Eagles Talon. The Ki-32 was the second kit released under the new name, as ET-102, in 1979. Wings Models, LLC is now the owner of all moulds, decals, parts, and inventory of Wings 72, Wings 48, and Eagles Talon. Don Bratt started the Wings 72/48 Inc company in 1980 in Grand Rapids, Michigan. The first 1/72nd scale kit was the Yokosuka E14Y1 Glen but the next three kits were the same as Eagles Talon's first three kits - the Sukhoi Su-2, Kawasaki Ki-32 Mary and Heinkel He-178 - all issued in 1980.

Thanks for posting these, Tom and Nick.

I remember this kit - ET kits were always nicely done, but with due respect, it's quite a reach from those two sheets of plastic to that model. To this day I've hardly ever seen a Ki-32 on the table at a model show. Very nice, Tom.