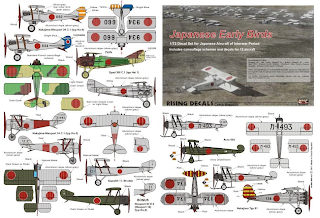 Two more recent Rising Decals sheets to expand an already prolific repertoire of interesting Japanese aviation subjects and very welcome these are too. Sheet RD72055 Japanese Early Birds covers 12 early IJA subjects - all imported/licence-built types bar one. And all are distinguished by small size characters and numbering on the tails which would be virtually impossible to achieve convincingly otherwise and has hitherto been an obstacle to representing these early biplane types in IJAAF service. 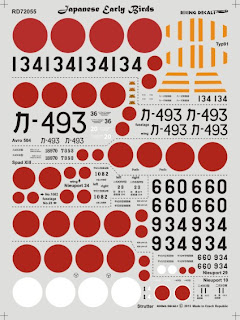 First up a pair of 1st Sentai Nakajima-Nieuport 29 C.1 Ko-4 biplane fighters in aluminium dope with brightly coloured rudders and elevators, one yellow with white stripes and one bright blue. The Ffrom-Azur kit is the only game in town and it might be hard to find now. Secondly a SPAD XIII C.1 Hei 1 in French five-colour camouflage for the Eduard or Revell kits. Then another one in smart silver dope with white fuselage band - a nice alternative SPAD XIII scheme this one. On both SPADs the combination of rudder characters and numbers provides a unique opportunity to model these early types and a good excuse for Japanese aircraft enthusiasts to enjoy the lovely Eduard kit! Sticking to a French theme the Nakajima-Nieuport 24 C.1 Ko-3 is next, two options in silver with either a broad or narrow red fuselage band, for the exquisite but challenging Roden kit. We move to British imports next with a pair of Sopwith 1½ Strutters, one in aluminium dope with a polished cowling and one in PC10 khaki drab dope (probably). The Flashback, Toko or Eastern Express kits are required for these. A bonus is the tail feather markings for a Nieuport 83 E.2 (Nieuport 10 Ko-2) - for which you'll need the very nice HR kit - # 72016 - which comes with Japanese decals for three options but all of which are actually for the Nieuport 81 (Nieuport 12 Ko-1) and it is not cheap! Three Avro 504 trainers come next, two in silver dope and one in PC10. These are very nice subjects and provide options for an aircraft with large wing, fuselage and tail codes or two which retained the distinctive Avro company logos and fuselage address stencils - an interesting juxtaposition to the Hinomaru. There are kits by Airfix (not currently in production but readily available second-hand and sure to re-appear) and A-Model (of the Soviet copy). The Airfix kit requires a few modifications for accuracy about which there will be more in a future blog post. And finally, rounding off what is at first glance a modest but is actually a most useful and inspiring sheet, a Nakajima Type 91 parasol fighter in silver dope with jaunty red and yellow striped fin, rudder and tailplanes for the suggested AZ Model kit (unfortunately also out of production and hard to find). All in all a superb sheet and I hope that we see more from Rising Decals featuring Japanese early birds - perhaps a rising sun rudder for the Nieuport NG/NM (IVG/M) monoplane which is planned to feature here in due course presenting genuine pre-1914 plans and data for the actual aircraft. 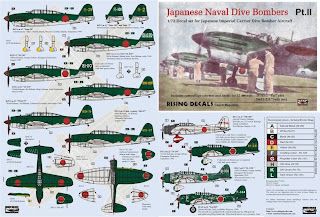 The 'Val' options consist of a very colourful D3A1 'EII-206' off Zuikaku with flashy white-flashed red wheel spats and a Houkokou legend to boot which participated in the attack on Rabaul in January 1942 - a nice alternative to a Pearl Harbor bird - and three D3A2. The first, '81-241' from 1081st Ku is in standard finish but the last two feature very worn finishes - '81-1130' also from the 1081st Ku at Atsugi in 1945 and タイ-584 (Tai-584) from the Tainan Ku in 1944 without wheel spats. Very good options these for the Fujimi kit offering plenty of scope for weathering techniques. A nice feature of this sheet for both types is the selection of tail drift stripes, data blocks and various stencils. Highly recommended.

With thanks to Mirek for the kind provision of the review sheets.

Thanks for posting notices of these new sheets, Nick.