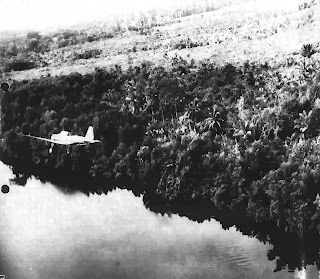 Courtesy of the sleuthing skills and perseverance of Ronnie Olsthoorn come these remarkable images of the last moments of a Ki-51 'Sonia' of the 10th Dokuritsu Hikodan Shireibu (Independent Air Brigade Headquarters - 独立 飛行団 司令部) near Miri airstrip, Borneo at 1155 hrs on 22nd March 1945. Note that the 'Sonia' has had the wheel spats removed. 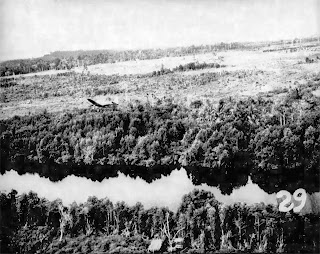 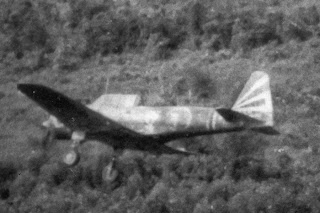 The 'Sonia' was shot down by the nose, top and starboard waist gunners of a PB4Y-1 of VPB-117 being flown by Lt A G Elder USNR and engaged in a search of the North-West coast of Borneo. The 'Sonia', mis-identified as a 'Kate' (Nakajima B5N1/2) with its undercarriage not yet retracted (!), had just taken off from Miri as the PB4Y-1 was about to commence a bombing and strafing run on the strip from 500 ft altitude just below an overcast. Lt Elder turned onto the Ki-51's tail and then pulled alongside while his gunners fired at it from the 7 and 8 o'clock positions. 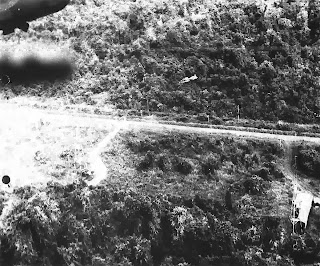 The 'Sonia' then rolled to the right and crashed in a fireball beside the road below. Note the car with open door on the road. An enlargement of frame 2 of the 'Sonia' was also reproduced on page 23 of the excellent Arawasi Eagle Eye Series No. 1 on the Ki-36 and Ki-51 but the location was incorrectly identified as Mili Atoll in the Marshall Islands rather than Miri airstrip in Borneo where the 10th were operating at the time and where this incident actually took place. The Ki-51 was usually quite handy, manoeuvrable as a fighter with 2 x 12.7mm in the wings, as 73rd Dokuritsu Hiko Chutai leader Captain Shimada's epic fight with Lindbergh and the 49th FG P-38s over Amahai Bay in the Halmaheras on 28 July 1944 demonstrated. But in this instance it was probably caught by surprise without a gunner/observer in the back seat and the unfortunate pilot was probably a staff officer rather than a combat flyer. 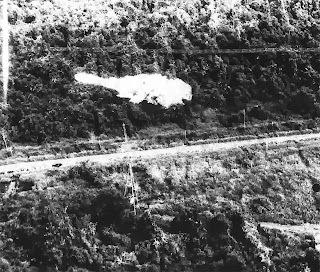 The aircraft was in mottled camouflage with a dark fuselage stripe with light borders and a stylised insignia '10' on fin and rudder that the PB4Y-1 crew described as "rays". The aircraft identity was subsequently corrected to 'Ann' (Mitsubishi Ki-30) by intelligence personnel, a type with superficial resemblance to the Ki-51. It is apparent from reviewing many USN and USMC combat reports against Japanese records that the Ki-51 'Sonia', especially in special attack operations, was frequently mis-identified as a 'Val' (Aichi D3A1/2). 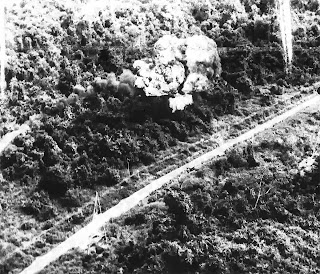 A Ki-54 'Hickory' transport aircraft of the 10th Dokuritsu Hikodan Shireibu was used to convey the Japanese surrender delegation under Lt General Masao Baba to Labuan, Borneo in August 1945 and carried similar markings on the tail. 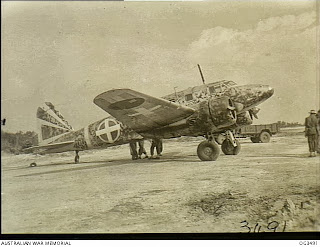 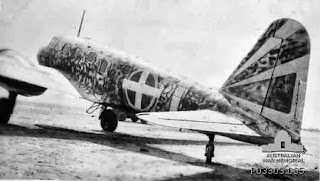 What a stunning series of images...thanks for sharing.
Dan

Fascinating yet tragic images. Clarity of the Ki-51 is great, as is even ground detail. Dioramaists, feast your eyes! - Fred