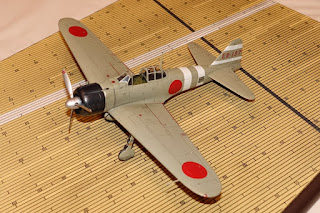 This superb evocation of a Pearl Harbor A6M2 in 1/72 scale by Mark Smith is a natural prequel to Oleg Pegushin's A6M3 duo of yesterday. The model, made from the Tamiya kit, not only came first in its own category at the Fort Worth Supercon show but also won Best World War II Subject there from amongst 150 entries of aircraft, armour and ships. Mark has kindly penned some thoughts about the model and its colour for Aviation of Japan. 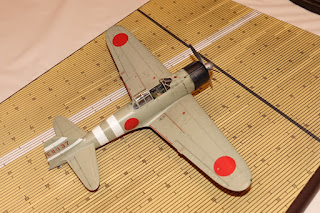 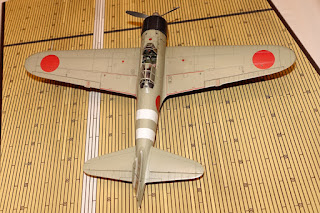 "I remember that my return to model-making as an adult was spurred by opening the then-new Monogram AT-6.  It was quite exotic for its day, and still makes a beautiful model when built.  I can’t help thinking that the new-tool 1/72 Tamiya Zeros (they make the Model 21, 22, 32, and 52c) could serve the same purpose in luring many out of modeling hibernation and back into playing with plastic.  I don’t even build 1/72; that’s the Dark Side.  But when I received this as a Christmas gift, I was amazed; a little single malt convinced me I should at least take the parts off the sprues that night and see how things fit.  They fit.  And I ended up building it.  It’s a masterpiece.  The cockpit somehow gives up nothing to its 1/48 big brother.  The landing gear is a press-fit - aligned - without glue. So I don’t buy the occasional quibble I hear that these kits are pricey. They’re worth every penny. 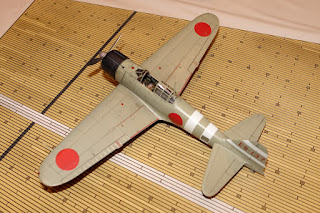 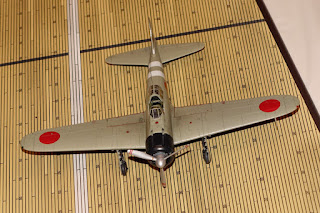 At the recent Fort Worth show, several people asked about what paint was used on this model, and it’s interesting that whilst the ancient Humbrol A/N2 shade is indeed a dead dog - nevertheless I sensed that the 'new' paradigm (not so new now) is generally perceived to be on the greener rather than browner side of things.  It is still a color that surprises, and it seemed so dark and so brown when mixed that I wasn’t so sure.  The first time I saw the color on a model was Greg Springer’s 1/48 build of Iida’s Zero from Soryu many years ago.  Greg’s research and effort to establish an accurate mix were truly meticulous and at that show the model created a great deal of interest – and, of course, not a little doubt among some at the time.  After all, it wasn’t even close to Humbrol A/N2!  There are fewer of us now (at least here in North Texas, it seems we are not being replaced in kind) and we have generally mellowed as we have gotten rounder to realize that the color of airplanes is not a ditch worth fighting over, much less dying in.  But we are still damned interested.  Considering the body of evidence for this color and the well-marshalled arguments on this blog, at j-aircraft.com and in Bob Mikesh’s work, I think more than anything this demonstrates the sway that model paint manufacturers have over received opinion. 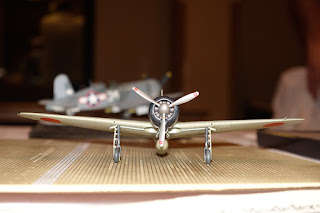 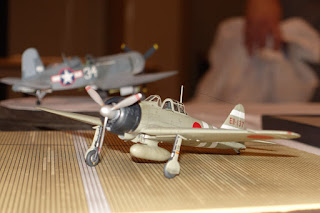 "This is not a criticism of any of those companies as I’d rather see them taking a crack at specialty colors than not.  But it is fairly strange that Tamiya’s shade for this color does not better reflect the value of so many relics measured by eye and colorimeter that, taken together, are surprisingly consistent, and which have been documented and presented with such care over several years.  Nor do they match the relevant Model Art chips, or the large chips from the T-Stoff Japanese chip chart (which has held up well in comparison to much later work).  In fact I don’t know what source these are meant to match, if anything.  After all, Tamiya is known for the traditionally superb research behind their products.  But in taking care to mix the color for this model using Greg Springer's Tamiya formula cited in Nick’s guide to Painting the Early Zero-Sen, I was surprised how different the results were from Tamiya AS-29 or XF-76, the two colors Tamiya has marketed for what is now generally termed J3.  An unscientific description: the Tamiya color is close – but not really.  Too green. 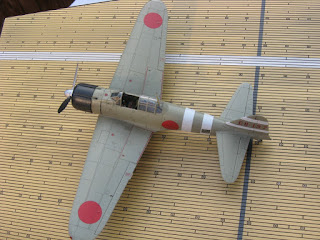 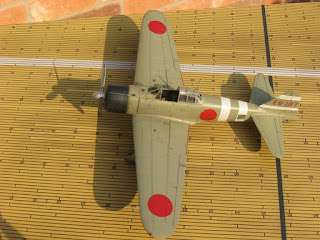 "It was suggested in the guide that this mix could be lightened using ‘light green’ and so my next question was, as you can guess, ‘what light green?’  And such could quickly lead to questions like, ‘What is light green, anyway?’ and maybe putting on some Bill Evans – and a total loss of initiative. (I know about these things).  So I tried this and that, and ironically the best paint I found to slightly lighten the custom mix without much loss of the warm olive tone was…Tamiya XF-76!  But it doesn’t take much to shift the color.  Like most readers of this blog I have many books and resources on the Zero, but regardless of what one uses for reference when building one, Painting The Early Zero-Sen is the perfect complement for providing all essential color information in one place, cross-referencing several systems of color standards through a graded range of color chips.  Nor does it leave out alternative interpretations or known exceptions regarding the listed standards.  Luddite that I am, I printed mine out and had it comb-bound for a workbench copy."

As Mark observes, in addition to a diehard body of opinion (and art) that still dresses early Zeros in a near white livery, there is a strong tendency towards pale, bright, lime-greenish grey-greens that mimic the RAF paint colour Sky and are sometimes referenced to 'pistachio', above and below Zero models of all variants. The Methuen Handbook of Colour sets pistachio green as 28 C 4 and I have only one word for anyone who still thinks that represents the paint colour of the Zero - no! You need to be looking way back at 4 D 4 which Methuen describes as olive brown. The difficulty in appreciating the true colour value of the paint is evidenced by its slippery appearance under different forms of illumination as shown in the last pair of photos taken by Mark above. Indeed there are those who, observing an accurately painted model, will still perceive a colour more like RAF Sky (even one of the photos here drifts towards that impression), the amber - yellowish-brown - undertone being completely invisible to their personal colour acuity.

With special thanks to Mark Smith for sharing these images of his prize-winning model at the show and to Bert Greynolds for taking them. And a special tip of the hat to James F Lansdale and Greg Springer for their pioneering efforts in the pursuit of true colours.

Still have not build any of the early Zeros - they are like 'holy cows' for me:) Yours, Mark, is a true gem. Will save it and use as a reference.

Excellent work Mark! It's "only a model" but I instantly recognised your style in it, somehow. Which is very high accuracy and detail and good photos too. Top job!

The plane is amazing but I am most interested in your fight deck (base). Would you please explain how you made it and/or what company provided the material. Thank you
CJ Johnson
Semper Fi

Thanks all, for the encouraging comments

And to C.J. - The base used for that model is made by Hobby Master out of solid ABS plastic, and comes as one piece pre-painted with its own outer border. I think I paid twelve dollars for it, very much worth it. It’s quite hardy, and the only change made to the stock item was to tape off several sections and ‘planks’ with Tamiya masking tape in order to spray various shades of Tamiya ‘Smoke’ which is great stuff for weathering effects. This can easily give you three or four subtle shade differences according to airbrush settings or number of passes, without the need to mix paint for them. When dry, I used artists’ chalk pastels to weather it more broadly. It was interesting during this project to look at as many photos of Japanese wartime wooden decks as I could find, and to see the wide spectrum of their appearance, from pristine to pretty filthy after or during a battle. You can find the item here. They have a wide range of beautiful bases. – Mark