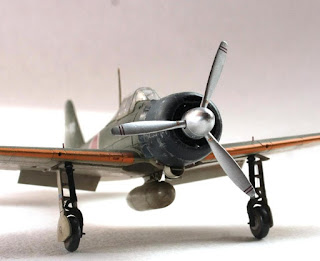 Zero models (and Zero Aces) are a perennial favourite with modellers all over the world and there has never been a better selection of quality kits from which to build examples of them. If only the abundance of kits and their popularity were matched by more attention to the real colours of the aircraft rather than a dogged adherence to the mythology that has grown up about them. As recently as last year forum pundits were opining about 'clear lacquer coats' based on nothing more than 'belief' and muddying the waters yet again. And don't get me started on the fad for depicting abundant paint-peeling bare metal. 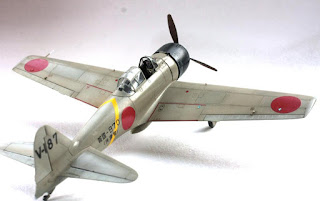 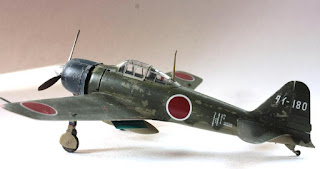 Having said that no apologies are offered for showcasing some very fine and accurately painted 1/72 models of Mitsubishi's A6M carrier fighter over the next two blog posts, in reverse evolutionary order and beginning with a superb duo of A6M3 Model 32 Zeros crafted by Oleg Pegushin. Both models represent aircraft of the Tainan Kokutai, the camouflaged example Tai-180 as flown by ace NAP 1/c Takeo Tanimizu from bases on Formosa (Taiwan) during September 1944. Oleg's build report, in Russian, is here and includes many useful images of the real aircraft and artifacts. 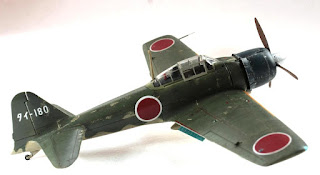 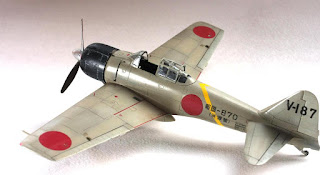 Oleg's models were built in parallel from the mainstream Tamiya and restricted issue Fine Molds kits. Oleg wanted to know if the Fine Molds kit is still the best 1/72 Zero and discovered that the Tamiya kit appears to have some problems with geometry around the cockpit compared to the drawings in the FAOW book.

In Oleg's opinion, although the Tamiya kit has some finer details, the Fine Molds kit is still better, but he admits that maybe that is because he only has a few of them "in stock" and needs to advocate purchase of this more expensive kit! The Tamiya A6M3 is still a beautiful kit, he says, also more affordable and easier to obtain. 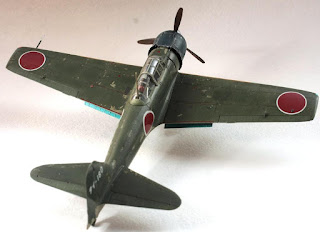 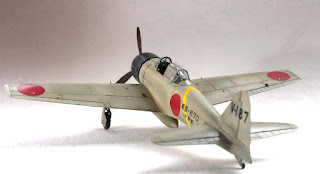 Both kits were made out of the box with only the markings for the Tamiya model from Rising decals. Oleg used Vallejo and some Gunze Sangyo (GSI Creos) paints. He tried to replicate scratches and paint wearing on the dark green camouflaged Fine Molds model using a special Vallejo fluid but didn't like it as it results in an orange peel effect. Oleg's build report, in Russian, is here. 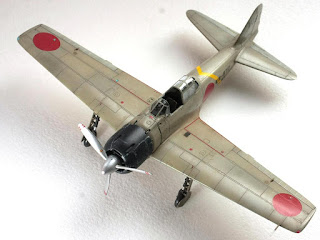 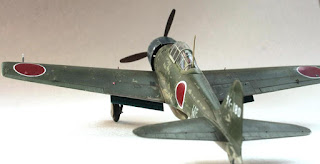 Although not the most popular of the A6M Zero variants I have always had a fondness for the look of the A6M3 Model 32 which is well displayed in Oleg's excellent photographs. It was the very first of the Hasegawa early generation Zeros that I ever built, ignoring Mitsubishi painting practice and taking the 'pale blue' part of the IJN aotake description (淡青色透明) too literally. The pugnacious stance of this variant has appealed to me ever since. 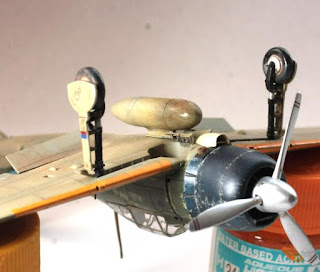 The type designation A6M3 Model 22 was intended to designate the marriage of a developed Sakae 21 engine - with two-speed, two-stage supercharger, down draught carburettor (with the air intake in the upper cowling lip rather than beneath the cowling as in the A6M2) and a re-geared 10 ft propeller - to an essentially A6M2 airframe. The intention was to improve altitude and climb performance. However flight testing of the prototypes demonstrated disappointing performance and the test pilots suggested that the folding wing tips of the A6M2 should be removed. By doing this, fairing over the wingtips to create a clipped, square-tipped wing with shorter wingspan and modified ailerons, other improvements resulted - a better roll rate, reduced stick forces, and a faster level speed - so the planned Model 22 was shelved and the improved version ordered into production as the Model 32 instead. There was initially some discussion about the designation of this variant before it was settled on as A6M3 Model 32. 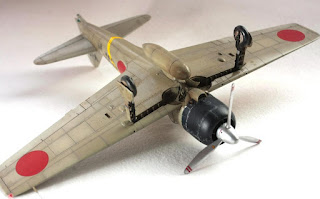 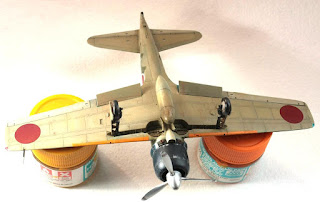 However front line pilots didn't really like the A6M3 Model 32 for various reasons and with the Guadalcanal campaign its limited range (it carried 22 gals of fuel less than the A6M2 and was heavier) became a strategic issue forcing the deployment of the earlier A6M2 for long range sorties. The operational requirements for a longer range were then incorporated into the improved engine design with a reversion to the original longer wing (but without the folding tips) to accommodate fuel tanks in the outer section and aileron balancing tabs to reduce the control forces on the longer aileron. Although this variant actually followed the Model 32 the previously intended designation of Model 22 was reinstated for this version. 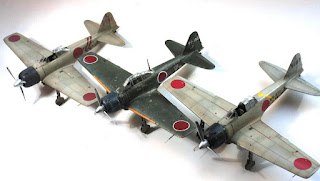 Oleg's A6M3 collection, with "one he made earlier"

The Models 32 and 22 were manufactured exclusively by Mitsubishi with the first production examples of the former emerging from the factory in June 1942 and the Model 22 from December 1942 when the last 23 Model 32 aircraft were manufactured. Production of the Model 22 then continued until August 1943. In total only 340 Model 32 and 560 Model 22 were produced. All A6M3 Model 32 Zeros and the first 225 A6M3 Model 22 Zeros were delivered in the standard overall amber grey finish. From approximately mid-March 1943 Zero fighters engaged in the Solomons campaign began to have dark green upper surface camouflage applied to them in the field. The application methods varied and there was no standardised pattern. Deep green paints of unknown origin were applied to the upper surfaces of the aircraft in mottles of varying density, blotches, tiger stripes and even cross-hatched patterns. Later aircraft still in use in second line or training roles were re-painted in the standard solid deep green black over amber grey scheme.

With special thanks to Oleg for sharing these images of his excellent models.

Each of these are beauties, Oleg, but the group shot is my favorite. It's a fine collection and each is beautifully painted.

These are excellent, very convincing especially given their diminutive scale. Great work.

Wow, just wow. I haven't felt like resurrecting my Zero builds, but this post, and those that follow have certainly inspired me. Just beautiful. Oleg: "spaceba tovarisch!"