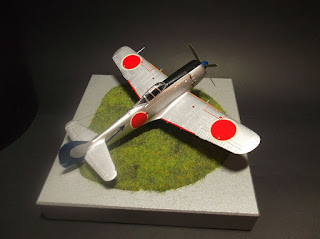 Britmodeller Sean has very kindly shared these images of his straight from the box build of the classic Hasegawa Nakajima Ki-84 Hayate in 1/72nd scale. 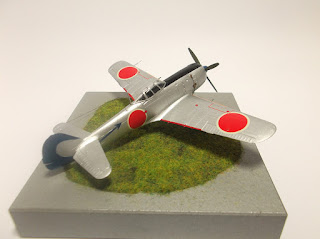 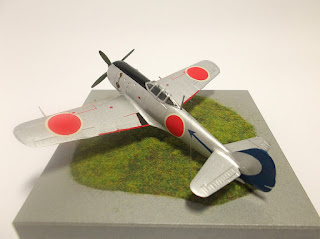 Sean painted some of the red, yellow and blue markings as the kit decals other than the Hinomaru were not useable but otherwise reports that the kit was a pleasure to build, fitted together nicely and without the need for any filler. 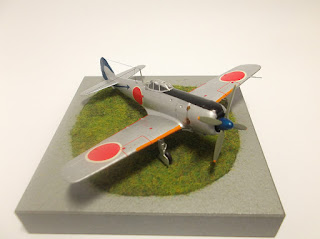 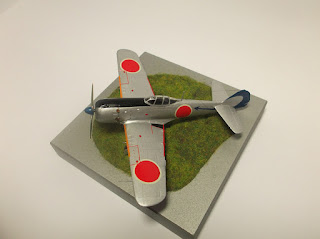 The scheme represents an aircraft of the 2nd Chutai of the 29th Hiko Sentai, on Taiwan in 1945. The spectacular blue 'wave arrow' marking, once the subject of controversy and scepticism, was confirmed by a photograph clearly showing it on a derelict Ki-44 in the Philippines. 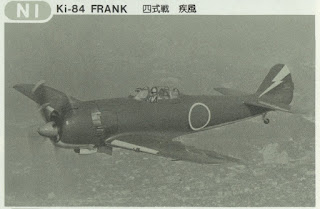 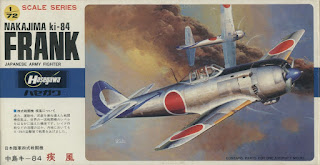 1982 Release as B18
This kit was first announced as 'N1' in Hasegawa's 1978 kit catalogue with a photograph of the surviving Hayate in flight, but like its companion Ki-43-II in the same scale was not released until 1982 as kit # B18 in the "blue flash" box. Box art by Shigeo Koike depicted the 29th Hiko Sentai example but alternative decals were included for '327' of the 73rd Hiko Sentai in 1944 in the factory-applied olive drab scheme with a colour profile of that aircraft on the side of the box.

1994 release as SP132 with Aeromaster Decals

The kit was re-issued in a new style box in 1987 as Kit # 504 with the same Shigeo Koike art but re-sized and presented. The parts were still in dark green plastic but the alternative markings were now for aircraft '40' of the 1st Chutai, 47th Hiko Sentai at Narimasu, Japan in 1945, also in the olive drab scheme. In 1994 the kit was released again in both the standard 'orange' AT series and as a special edition SP132, this time moulded  in grey plastic with the addition of a set of Aeromaster Decals (the 1987 issue decal sheet was still included). This provided markings (shown below), including Hinomaru, for two special attack Hayate of the 57th and 182nd Shinbutai, as flown respectively by Lt Yoshitoku Itoh from Shimodate on 17 May 1945 and 1Lt Takeshi Imoto from Tatebayashi in August 1945, the latter aircraft reported to have been painted dark purplish blue on the upper surfaces. Both aircraft had large lightning flash emblems on their fuselages. The kit has been re-issued several times since in special editions with new box art and decal sheets, of which more anon. There are no mainstream competitors to this classic kit in 1/72nd scale. 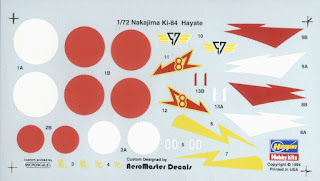 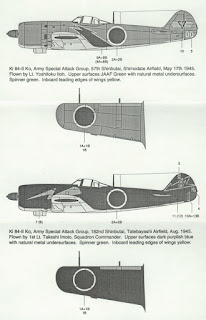 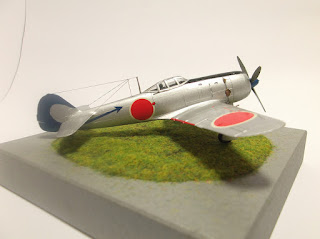 With special thanks to Sean for sharing these images of his classic model.

Love the Ki-84, I'm a fanatic who has built the Hasegawa version in 1/48th scale (perhaps the best in any scale), as well as having built the Arii/Otaki and Tamiya both in 1/48th the "Hase" 1/72nd.

Good job on your little beauty!

Thank you all for taking the time to comment,
and to Nick for sharing my model on his blog,
Kind Regards, Sean