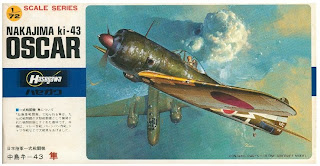 First announced in their 1978 kit catalogue with a well known photograph of a Ki-43-II Kai, Hasegawa's 1/72nd scale Hayabusa kit was not issued until 1982. Kit # B17 in the "blue flash" box was molded in dark green plastic with optional decals for a 50th Sentai aircraft flown by controversial JAAF ace Sgt Satoshi Anabuki in 1943 and an anonymous 64th Sentai machine flown by the 1st Chutai leader in 1944. Surprisingly the kit featured raised panel detail, whereas earlier Hasegawa kits such as the Ki-44 and Ki-61 had engraved detail. The kit offered alternative parts for what were then known as Ki-43-IIa early and late versions and a Ki-43-IIb. Attractive box art by a nascent Shigeo Koike featured Anabuki's Hayabusa climbing steeply over a B-25 gunship.
In 1987 the kit was re-issued in a larger, deeper box as # 501. The original Koike box art was re-formatted and cropped to display a larger image of the Ki-43. The kit was still molded in dark green plastic but the decal options were changed and a new style instruction sheet included. The 64th Sentai option had been deleted and instead, in addition to Anabuki's machine, the markings for the Hayabusa of 59th Sentai ace Sgt Major Hirohata were provided. These included his distinct black 'bird of prey' fuselage marking.
In 1992 the second re-issue of the kit retained the Koike artwork in cropped format but was now numbered as AT1 (02501). The design and colours of the box labeling were revised and included a colour photograph of the made up model on the side of the box. The kit was now molded in light grey plastic with the same markings options as for # 501.
In 1994 a special edition of the kit with Aeromaster decals was issued as SP130 (51630). The box design was the same as AT1 but had a black "flash" added in the top right corner on the front of the box advertising the inclusion of the Aeromaster decals. The additional Aeromaster decal sheet was contained inside a ziplock bag with its own instruction sheet and provided optional markings for 4 aircraft:-
'White 15' of the 25th Sentai Hombu (HQ Shotai)
'Red 725' of 2nd Rensei-Hikotai
11th Sentai Commander
20th Sentai, 1st Chutai
The first option was incorrect in depicting a blue tail stripe for the 25th's Sentai Hombu. Aircraft # 15 was actually flown by Sgt Major Koshiro Otake of the 2nd Chutai and the tail stripe should have been red, a mistake that would be corrected in a subsequent special edition of the kit (q.v.).
This kit included the standard Hasegawa instruction sheet and decal sheet from the previous issue.
In 1999 the kit enjoyed its fifth re-issue in a new white box, still with the original Koike box art, although this had again been re-formatted, and now numbered as A1 (00131). Markings options were unchanged from AT1. This version of the kit appears to be still in production and generally available.
In addition to these "standard" issues, Hasegawa have also released the kit in limited editions with different box art. We'll look at those special issues in Part Two.
If anyone knows of any other issues featuring this box art (not the limited editions with different box art) please let me know by sending an email or making a comment, thanks.
Images credit: Hasegawa Seisakusho Co Ltd., © 1982, 1987, 1992, 1994 & 1999.
Posted by Straggler 脱走兵 at 14:30

See Osprey Aircraft of the Aces * 85, Ki-43 'Oscar' Aces of World War 2, by Hiroshi Ichimura, page 54, color profile #4 with the same markings as in the Koike box art, but shown on the Ki.43-I variant instead. A second pilot is also attributed to nine of the 12 victory symbols on the tail fin, a Cap't. Shigeru Nakazaki; the 50th Sentai's 3rd Chuutai-cho in January 1943.

Fujimi first brought this to our attention with the stock number 72032 boxing of their 1/72nd scale Ki.43-I kit. Its box art showed these markings on a Ki.43-I. Fujimi has long since discontinued that boxing, but the markings remain available from the original and still current Hasegawa boxings.