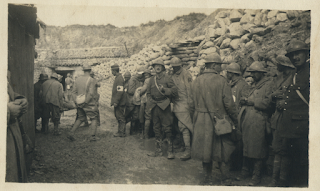 There were 202,567 French casualties during the Somme battle, their ordeal sometimes overlooked. The candid photograph above was taken by my paternal grandfather, whom I never knew. He served in the Automobile Service of the French Army. He was not French but spoke fluent French and was an automobile engineer specialising in early motor transport. By a strange coincidence he had dealings with Japanese Army liaison officers who appear in one of his photographs. His eldest son, my uncle, whom I also never knew, served alongside him. This is one of just a handful of photographs saved from a bonfire where they had been consigned by my aunt as memories too painful to look at.  Note the German medical orderlies working alongside the French, making the pity of war even more poignant. 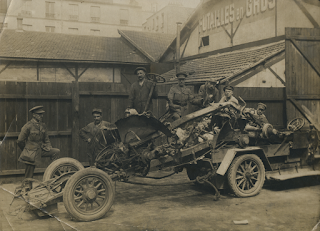 My grandfather is at left in the photograph above, with his left leg raised and resting on the vehicle wreckage. His uniform is of the British Army but bears the horizon blue collar tabs and flaming grenade insignia of the French Army. Below that is the haunting image of his eldest son, Gordon. Apart from a few photographs the only tangible memories of my uncle Gordon are a presentation copy of Homer's Iliad and Odyssey awarded to him in the Preparatory Form of Raneleigh School, Bracknell, Berkshire in December 1912 and a wooden biscuit barrel with a silver escutcheon engraved "To Mother from Gordon, Xmas 1915", testimony to his very young age when he went to France to accompany his father.  My own late father, two years old when the war began, had fleeting memories of my grandfather returning on leave from France and the gift of a French Army 'Adrian' helmet, now sadly lost. 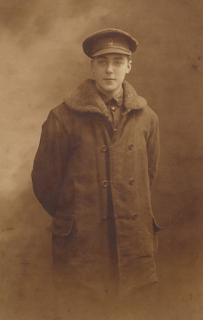 Forgive the indulgence here at the blog but the past few days, as the Somme commemorations kindle family memories of the Great War, the albums are brought out to wonder at and so many people seem to presume that Anglo-French co-operation and friendship can only exist within the confines of the EU, I have been thinking of these two men, my grandfather and my uncle.

Image credits: All personal
Posted by Straggler 脱走兵 at 09:30

No apologies needed for sharing such great photos and an interesting family history. I enjoyed it very much. Your grandfather's picture shows the kind of resoluteness that characterizes Brits of that time period (I don't think Americans had a lock on this "Greatest Generation" stuff). Your uncle Gordon was quite a handsome lad.

Thanks for sharing these poignant images and thoughts Nick. May they all rest in peace.

Priceless photos! So glad they were saved from the bonfire. Always cherish the memories, and thank you for sharing them with us.

'Note the German medical orderlies working alongside the French, making the pity of war even more poignant.'

Wow that is weird, didn't know this ... somehow for me this makes war even more absurd.

Thank You for sharing the very poignant photographs..

A favorite by Archibald Macleish


The young dead soldiers do not speak.
Nevertheless, they are heard in the still houses:
Who has not heard them?
They have a silence that speaks for them at night,
And when the clock counts.
They say: We were young. We have died.
REMEMBER US.
They say: We have done what we could,
But until it is finished it is not done.
They say: We have given our lives but until it is finished,
No one can know what our lives gave.
They say: Our deaths are not ours: they are yours,
They will mean what you make them.
They say: Whether our lives and our deaths were for,
Peace and a new hope or for nothing we cannot say,
It is you who must say this.
We leave you our deaths. Give them their meaning.
We were young, they say. We have died;
REMEMBER US.