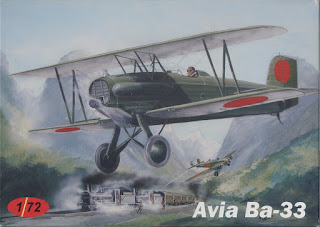 For those looking for something unusual, in 2013 AZ Model released a rather neat little 1/72nd kit of the attractive Avia Ba-33 biplane fighter in Japanese Army markings. This aircraft was actually a BH-33L powered by a Skoda 450-500hp engine. In March 1930 one example of the 80 BH-33L aircraft built, s/n 1020, was sent to Manchuria as a demonstration aircraft sponsored by the Skoda Works, Shanghai, which represented the Czech Avia company in China.  Manchuria at that time was under the control of Chang Hsüeh-liang, the son of the warlord Chang Tso-lin and known as "the Young Marshal". In 1928 Chang had joined with the nationalist Kuomintang government of China and his nascent air force became the North-Eastern Air Force. 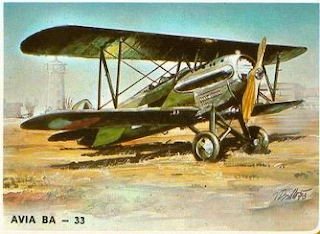 The BH-33L was assembled at Mukden (Fentien, re-named Shenyang in 1929) by Avia mechanic Vacek and then on 12 June test flown by Avia company pilot Cestmir Hanus. In October 1930 it was flown in trials for the benefit of the Headquarters of the North-Eastern Air Force with a Dewoitine D.27 and Letov S.131. Although the Avia aircraft proved superior in the trials it was disassembled and put into bonded storage in a Mukden hangar. 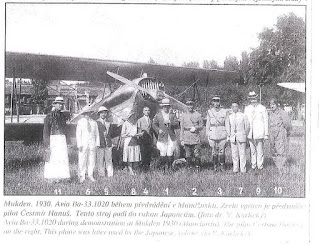 The Ba-33/BH-33L demonstrator was reported to have been originally finished in the standard Czech air force colours of khaki on the upper surfaces and aluminium dope underneath. The AZ instructions show an unusual demarcation of colours around the nose which appears slightly different to that shown by the only known photograph of the aircraft at Mukden, published in the Czech magazine HPM of November 1994 (above). The Avia applied khaki appears to have been a little lighter than the usual Czech Air Force colour and is available from Agama in both enamel and acrylic paints. Whether the aircraft was really re-painted by the Japanese in the 'Japan Dark Green' suggested by AZ is uncertain but the application of the large Hinomaru to the tail surfaces was not a standard presentation and appears to be based on the Czech air force markings. In addition to the Japanese markings the kit provides two alternate schemes for a Czech and Slovak machine. 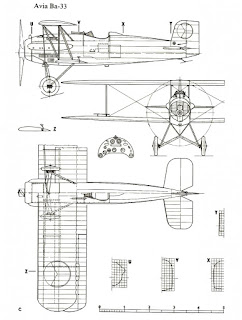 The kit is injection moulded in grey plastic with an alternative resin prop for use with this version and injection moulded clear parts for the windscreen and what appears to be some kind of gunsight in front of the windscreen (?). The moulding is sharp but the rib tapes on the wings and tail are rather prominent and would benefit from a light sanding. Armament consisted of two cowling mounted 7.7mm synchronised machine guns. Images of the sprue frame and a built-up example of the kit in its Japanese markings may be found here.

Update: Gary Lai has kindly sent a link to his blog here where he has published an old magazine image of another photograph of the assembled Avia in the hangar at Mukden. The dark tone of the image may have suggested the idea that the aircraft had been re-painted.

With special thanks to Mirek Kárník for his assistance with this article, to Gary Lai for sending the link to his blog and also acknowledging Lennart Andersson's 'A History of Chinese Aviation' (AHS of ROC 2008) as an invaluable reference source.

I recently came across a color plate of an Italian Savoia Marchetti SM-75 in Japanese markings. The description said it was a special plane that flew from Eastern Europe to Japan. The aircraft was designated RT (Rome to Tokyo) and piloted by Lt Colonel Antonio Moscatelli in July 1942. That's all the information I could find. I hope that you can do a posting on this in the future.]