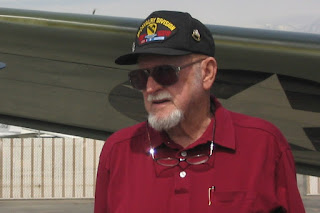 It is with sadness to record that Donald W Thorpe, best known to most of this community as a pioneer researcher and author of two seminal books on the subject of Japanese aircraft colours and markings, passed away peacefully in hospital on 19 September after a brief illness. Donald served with the U.S. 1st Cavalry Division during the Korean War, being awarded many commendations and honors. His career after war service was in the aerospace industry as a computer engineer which he pursued until his retirement.  He was the founder of PAWHA and a long time friend and aircraft preservationist with Ed Maloney at the Chino Air Museum from the time of its foundation. Donald is survived by his wife and soul mate Linda Rogers of Rosamond, California to whom Aviation of Japan extends condolensces and best wishes.

Although there were a couple of English language publications on the subject of Japanese aircraft colours and markings before Donald Thorpe's books they were never widely available or particularly comprehensive and he was the pioneer in bringing the subject to a wider audience in the West (and East!) and in systematically cataloguing the paint colours and their use, as well as lifting the lid on many other arcane or obscure marking practices. A measure of their mainstream availability was that a hardback edition of the Navy colours book was found on sale in Swindon Books, a leading bookshop and stationers in Hong Kong. One only has to look at the painting information for an early 1960s Japanese aircraft kit to appreciate the revolutionary impact of his research. To this day the books remain the only mainstream published studies in English and despite attempts to revise and, sadly, to discredit them they still provide an essential and qualitative baseline to the subject. 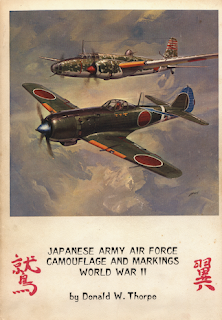 In his "Origins of References For Japanese Aircraft Camouflage and Markings" another eminent Japanese colours pioneer James F. Lansdale wrote:

"Influenced in great measure by the work of (Richard M ) Bueschel and the Japanese author/illustrator Minoru Akimoto, Donald W. Thorpe, began his studies. Thorpe began by drawing upon the resources of an international network of renowned Japanese aviation researchers including Hideya Anda, Richard M. Bueschel, Charles J. Graham, B. Calvin Jones, Lloyd S. Jones, Witold Liss, Robert C. Mikesh, Yasuo Oishi, and James Wood. Thorpe scoured the photographic files of the National Archives, the Air Force, private collections, and tramped every research area possible. But his best original data and factual knowledge came from the study of metal scraps and relics of Japanese warplanes which had been contributed by Dr. Charles Darby. Darby had gathered Japanese warplane artifacts from his many trips to the battlegrounds of the Pacific. The end result of these studies was Thorpe’s two-volume standard reference on Japanese camouflage and markings. The first volume, Japanese Army Air Force Camouflage and Markings [of] World War II: Aero Publishers, Inc. , was released in 1968. The companion volume, Japanese Naval Air Force Camouflage and Markings [of] World War II, also produced by Aero Publishers, Inc. was published nine years later in 1977. Today, in spite of a few errors which crept into the work as published, the two volumes have remained the quintessential sources on the subject of Japanese camouflage patterns, color, and markings in the English language." 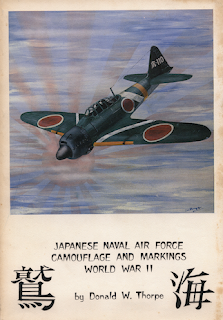 A limitation of the books in modelling terms was that their loose sheets of colour chips were printed (and are often missing from second hand copies) so were difficult to match paints to. In 2005 the late Bill Leyh and I collaborated to produce a PDF illustrating the colours catalogued in both books based on Donald Thorpe's original Munsell values for each colour and comparing them quantitatively to the FS 595 standard using the DE2000 difference formula recommended by the Commission Internationale de l'Éclairage (CIE). This became the first step in a long running research project to reconcile the colours in those books with the official Army and Navy paint colour standards of Japan, always mindful of the variance between the applied paints analysed and catalogued by Donald Thorpe and the official paint colour standards to which they were matched, a variance not always allowed for or appreciated by modellers. Donald Thorpe's pioneering work was both the catalyst and foundation for the work that followed, which set out to build on and to honour it rather than to supplant it. Reconcilement instead of re-invention is an aspiration intended to create a collegiate continuum of logic rather than the confusion and controversy that often follows a fractured, revisionist or too often competitive approach. To this end Donald Thorpe and his work are remembered and preserved with appreciation and humility.

Please do comment with your own memories of Donald and/or his books if you wish, thanks.

With sincere thanks to James F Lansdale for his additional information and assustance.

Thanks for posting this wonderful tribute to him, Nick. I felt a personal sadness upon hearing of his passing, and had never met the man. May his work live on, and may he rest in peace.

Don was a trailblazer indeed. His works have held up very well over time. A personal note, after he published the 2nd volume of his Japanese colors book I called him and asked if he possibly had any actual paint chip facsimiles or equivalent chips of the colors that were included in his book, It turns out he had made a few sets of approximately 2" X 2" color chips and had them mounted in a binder. I asked him if there was any way I could get a copy and he said "tell you what build me a model of the Zero on the cover of my IJNAF book and we will swap! Done!
Obviously I still have this treasure in my files and still turn to it in my research.
Blue skies, Don and thank you!
Pat Donahue

Sad news, but he gains a special place for all us taht follow this passion for WWII Japanese aviation.

Thanks for this deserved tribute.

P.S. I sent you an email with Horacio's photo.

This is sad news indeed.
Don's books, which I both obtained in the seventies, have guided me through 40 years of building Japanese airplane models.
Without him they would not have looked so true.
May his work outlive him for a further four decades!
Michael

Thanks for posting this tribute to Mr. Thorpe, Nick.

Sorry to read. Best wishes to his family.

I am saddened at his passing, but am thankful for his well lived life and his service to our country and contributions to our quirky avocation/hobby. My prayers and condolences to his family.

Blue skies Don.
These were some of the first books I ever purchased on the subject of Japanese WWII aircraft and are what ultimately led me to making this subject the main focus of my modelling interest.

Hi Nick,
it is very sad to hear Don Thorpe passed away. Although never got in touch with him, never have seen a picture of him he has been for me a kind of myth since I have been able to purchase his two invaluable publications about the military japanese aviation back in the early seventies.
My modeling have been based on his work which revealed over the years to be a very professional and highly reliable one.
It is always hard to find out the right words or express the deepest feeling one feels in such circumstances but I will always bear a memory of him with me. I am sorry I have never been able to present him my congratulations for his researches.
Blue Skies Don!
Thank you Nick for giving us the (sad) news

Sad news. 2016 has seen the loss of many greats in both aviation and arts.

Very sad news indeed, My Dad purchased the Army colours book when it was first published must have been around 1969. As a young lad i was fascinated by the colours & being allowed to look at the book by my Dad, It gave me a life time interest in Japanese aircraft to wish i am eternally grateful.

Nick,
Thanks for posting the tribute. I never met Mr. Thorpe, but he had a major influence on my life through his writings. My fascination with IJ WWII aircraft was definately shaped by his work and always made me want to dig a little deeper and find a little more. Thank you from my heart, Mr. Thorpe.
Bill Sanborn

I still have both of Don's authoritative books in my library. He truly was a trailblazer. Michael Claringbould

I met this wonderful man at an IPMS Space Park function and subsequently visited him at his home in Ontario. His kindness and generosity to an inquisitive Modeler was endearing. I wish that I would’ve kept in touch. I’m honored to be able to hold vivid memories of the man after some 35-40 years. Rest in everlasting peace, Don.