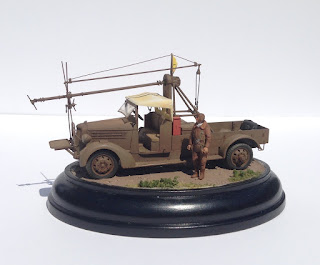 Richard Tool has kindly shared these images of his 1/48 scale JAAF Hucks-type airfield starter truck. The model was built with extensive conversion work from the Hasegawa Isuzu TX 40 fuel and cargo truck kits. 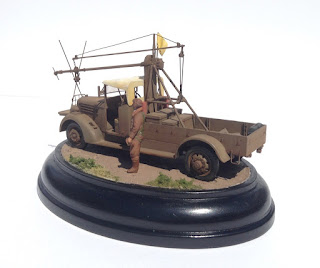 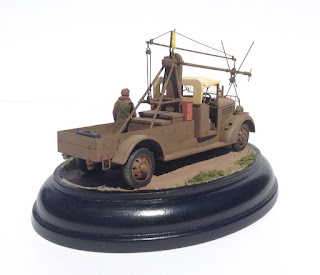 The scope of the work, chronicled in his comprehensive build report at Aeroscale,  included widening the rear axle, narrowing the cab,seats and soft top, cutting in recessed fender steps, extending the running boards and splash aprons and fitting curved rear fenders. The bed was scratchbuilt from sheet styrene as were the vertical chaincase, chests and front platform deck. All the rest - the quadrapod mast, front platform frame and grille guard, boom, starter shaft and gear were entirely scratchbuilt from soldered brass. 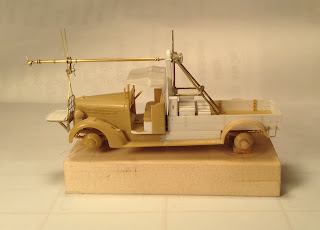 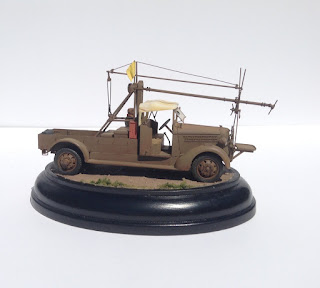 All of the work was accomplished by reference to photos and the components were proportioned and located by establishing ratios using the wheel diameter as a common known unit. The figure of the pilot is resin and came from a Hasegawa Ki-61 kit. Although the work is revealed to be complex and painstaking in the build report (the detailing in the boom array is remarkable) Richard found it a most enjoyable project. The starter truck is ubiquitous in wartime images and Aviation of Japan shares Richard's puzzlement that it has not yet been issued as a 1/48 kit like other airfield vehicles in that scale. A licensing issue perhaps? 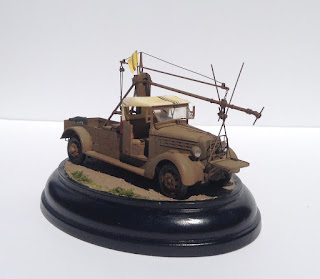 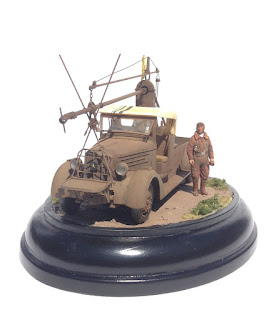 There are photos of these trucks in use on newly captured airfields during the 1941/42 Malaya and Burma campaigns which is astonishing. The ground personnel and equipment of the 3rd Air Division  were landed from two troopships at Singora immediately after the leading forces of the 5th Division and the embarkation staff had complained that the airmen had been loading "even iron beds, bathtubs and sofas" on one of the troopships.  The Allied C-in-C Far East, Air Chief Marshal Sir Robert Brooke-Popham, had informed a conference in response to the Japanese offensive that he had been "amazed by the speed at which the Japanese air forces could both transfer aircraft from base to base and improvise new ones".  The mind boggles at how these vehicles arrived so soon on the newly captured airfields in Burma.

With special thanks to Richard for sharing these images of this excellent conversion.

Beautiful work on the scratchbuilt parts, thanks for sharing.

Guessing how the japanese manufacturers pick their subjects is a futile game.

I like the fact that the model seems to have been photographed in full sun. Apart from emphasizing the quality of detailing and finish, full sun is the lighting you'd expect to encounter the real thing under.

Very good work on that truck!

Dan- Thanks for looking and for the compliments . I've been admiring your work on this site for some time now.

Vedran, Young Ian and Panagiotis - Thank you all for the kind words .

Really love the brass work on the starter mechanism. Is inspirational to see the project finished
as it really is a lot of planning and work to execute.

Beautiful work and a great result.

Warren - Thank you for looking and for the compliments .
Richard