A selection of Army types this time, again courtesy of Ken Glass's expert camera work. Please bear with me over emails as BT Yahoo Mail has been acting up with inboxes not loading and emails not sending. The problem seems to be intermittent but has been going on for a couple of days now. 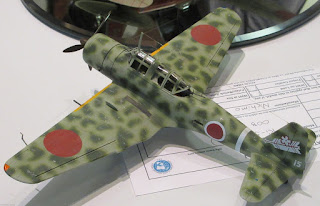 A very nice Ki-51 'Sonia' from the Nichimo 1/48 kit by Jason Holt of OH displaying fine attention to detail and skilful painting. The model represents an aircraft of the 64 Shimbu-tai, also known as Kokka-tai (国花隊 - flower of the nation unit) - a Tokubestu-Kogekitai (Tokko-tai) or Special Attack unit. It was one of about 12 Shimbu-tai organised from within the Hokota Flying Training Division and equipped with Ki-48 and Ki-51 aircraft, being formed on 20 March 1945. On 11 June 1945 nine aircraft of the unit sortied to attack US ships lying off Okinawa. They were probably the aircraft incorrectly identified as 'Vals' which attacked LCS(L) 122 and the liberty ship 'Walter Colton'. LCS(L) 122 was seriously damaged when her conning tower was hit by one of three 'Vals' shot down as they attempted to attack the ships in Radar Picket Station 15A, killing 11 of her crew and injuring 29. Fires on board were brought under control and she survived the encounter. The liberty ship was attacked when she was anchored in Nakagusuku Bay by a single 'Val' which made a run on LSD 6 then climbed and turned to attack the 'Walter Colton'.  It struck a boom after missing the bridge but the ship escaped serious damage and although some crew were injured none were killed. A fifth aircraft of the unit was possibly the victim of Lt Thomas H Reynolds Jr flying an SBD of VMSB-131 on anti-submarine patrol who also claimed a 'Val'. The fate of the other four aircraft which sortied from this unit is unknown. 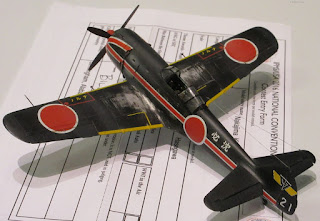 This gaudy. black-painted Ki-84 'Frank' Special Attacker of the 57th Shimbu-tai was made from the classic Hasegawa 1/72 kit by Bill Powers. The unit was formed within Akeno Flying Training Division in March 1945 and sortied against Okinawa on 28 May 1945 led by 2/Lt Kitoku Ito. 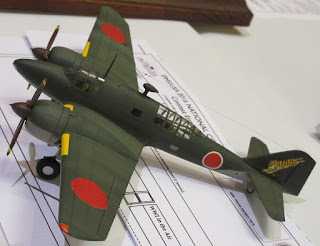 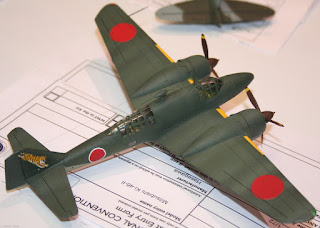 This Hasegawa 1/72 Ki-46-II 'Dinah' represents an aircraft from the 18th Dokuritsu Hiko Chutai. The unit spent almost the whole war operating from airfields in China with detachments to Indo-China from October 1940 to April 1941 and from March to August 1942,  The tiger emblem was used throughout but each one was painted individually so differed slightly from aircraft to aircraft. 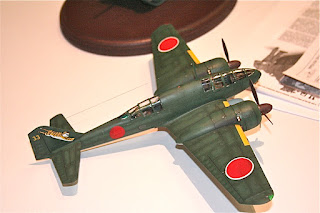 This 1/48 Tamiya Ki-46-III represents an aircraft of the 10th Hiko Sentai. The 10th was constituted from the 10th Dokuritso Hiko Chutai HQ, the 1st Chutai of the 81st Hiko Sentai and the 76th Dokuritsu Chutai in June 1943 and used the well known reversed 'S' river emblem to represent the River Non at the place where it was first formed. After being practically annihilated in New Guinea it was reformed in Japan and used the emblem shown on the model from November 1944, representing the number '10'. 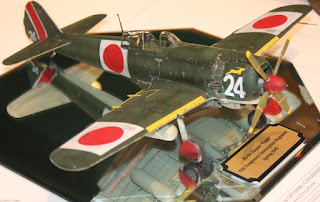 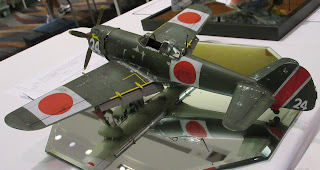 This splendid Ki-84 'Frank' in Homeland Defence markings was made from the Hasegawa 1/32 kit by Andrew Frill. It represents an aircraft of the 520th Rinji Bôju Sentai (臨時傍受戦隊) meaning  temporary (or special, extraordinary) air defence (interception) unit. This unit was formed from the 1st Rensei Hikotai at Sagami (now Nakatsu) in Kanagawa on 22nd July 1944 for operational training and to provide a supplementary air defence interception capability using shotai (flights) led by instructors and composed of the most talented student pilots fresh from flying schools. The unit had about 100 pilots, mostly 18-19 years old , who held "student pilot" Sergeant rank. After January 1945 they engaged briefly in air defence interceptions but from March they were re-organised into special attack units for the battle of Okinawa. 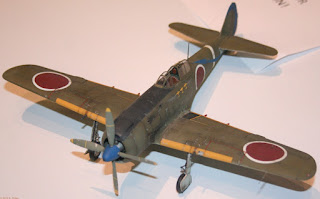 Another 'Frank', this time built from the Hasegawa 1/48 kit by Carlos Escobar of Peru and evoking the Jack Leynnwood cover art of Donald W Thorpe's seminal work on 'Japanese Army Air Force Camouflage and Markings World War II' from 1968, which depicted an aircraft of the 29th Hiko Sentai Hombu (HQ) shotai. However some references state that blue was used by this unit as the non-standard distinguishing colour for the 2nd Chutai. The colours and finish on this model are excellent. 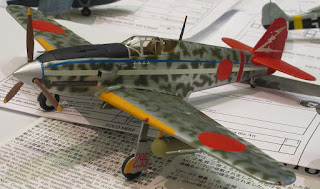 Always a popular modelling subject this Hasegawa Ki-61-I Hei was finished as s/n '3295' of the 244th Hiko Sentai commander Teruhiko Kobayashi. The silver and blue spinner is intriguing but the basis for that detail is obscure as the known photos of this aircraft appear to show a dark painted spinner. 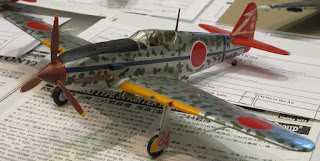 Another Kobayashi mount, this time s/n 4424, a Ki-61-I Tei made from the Hasegawa kit. The red spinner backplate detail is again intriguing but of unknown origin.

Another colourful 244th Hiko Sentai 'Tony' made from the Hasegawa 1/48 kit and representing a Ki-61-I Tei , serial number and pilot unknown. 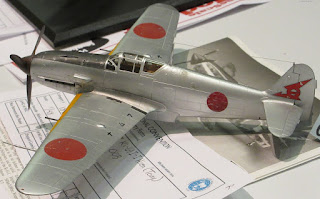 And finally for now, a sharp looking Ki-61-I Hei 'Tony' of the 56th Hiko Sentai in natural metal finish with plain Hinomaru built from the Hasegawa 1/48 kit. The Hei variant was prized for its German-manufactured wing cannon.

With special thanks to Ken Glass for taking the pics and sharing them and to Ronnie Olsthoorn for additional information.

Nice selection of models there! I particularly like the 29th Sentai Ki-84s.

About the Kobayashi Ki-61s... They look nice at first sight, as they often do, but there is a lot wrong with them. You already noticed the odd spinners, may I add to that c/n 4424 had a camouflaged spinner at the time the rudder inscription was added. Then there are yellow droptanks, lack of black exhaust panel, third aerial wire typical of the 244th Sentai is missing, c/n 3295 is missing the white surround to the fuselage hinomaru, c/n 4424's fuselage hinomaru has the wrong size and placement, and so on and so forth. As for the third one, nice scheme but if they come from the same modeller's hand I don't think it's very authentic either. Then again, in the words of Monty Python's Trry Gilliam: "It's only a model!" :)