A short piece of interesting contemporary animation showing how 24 year old  PO3c Kan-ichi Kashimura lost half the port wing of his 13th Ku A5M1 in a dogfight with Chinese fighters on 9 December 1937 during a raid against Nanking. Kashimura collided with a Chinese fighter, reportedly in a head on attack after shooting down at least one other but the animation suggests perhaps a mistimed hineri-komi manouevre? Despite the damage and an uncontrolled fall that took him close to hitting the ground Kashimura was able to regain control of the aircraft and return to his base at Shanghai. After four attempts to land he managed to get the aircraft down. It turned over but he escaped unhurt. The film also includes brief footage of the damaged Claude in flight and on the ground. The incident attracted considerable press and public interest in Japan and the damaged aircraft was later put on display. The Japanese Navy Minister Mitsumasa Yonai presented Kashimura with an inscribed photograph of his damaged aircraft in flight.

Kashimura's camouflaged Claude '4-115' featured on the monochrome box art of the original Fine Molds A5M1 kit. After service with the Yokosuka Ku Kashimura joined the 12th Kokutai when it absorbed the 13th Ku at the end of 1939 and later returned to the Yokosuka Ku. In December 1942 he was transferred to the 582nd Ku but was posted as MIA (Missing in Action) during combat over the Russell Islands on 6 March 1943.  At the time of his loss he was credited with 12 victories, 10 of which had been claimed over China. 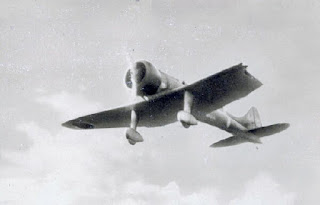 The unit's Claudes were  field camouflaged on the upper surfaces in a pattern of dark green and brown with the Army's white senchi-hiyoshiki fuselage band but retained their black cowlings and natural metal under surfaces. 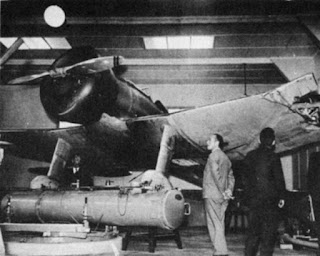 Image credits: Film footage via YouTube; All photos via web
Posted by Straggler 脱走兵 at 15:19

Fascinating video, I only wish I knew how to speak Japanese so I could understand the narrator. I also find it interesting that most newsreels from that time seem to use the same style of background music.

Thanks for this taking the time to make this posting, Nick.