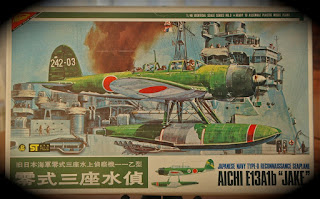 Responding to Aviation of Japan's Nichimo retrospective in October 2013, tempestfan got in touch regarding the origin of the Nichimo Jake kit. He was asking for confirmation that the Nichimo 1/48 scale kit was in fact a re-pop of the Marusan 1/50 kit. Unfortunately I don't have an example of the Marusan kit to confirm it absolutely but as tempestfan pointed out the first UPC issue of the Nichimo kit used the same Marusan artwork on the box. A review of Japanese auction sites strongly suggests that it is the same plastic or a very close copy. Burns notes that several Nichmo kits "were copied from other companies" and that the Jake, released in the late 1960s as S-4803, was originally issued as kit # 428 by Marusan. 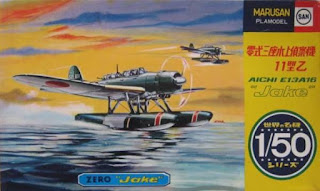 Marusan Shoten Ltd  was a pioneering plastic kit company, the first in Japan, operating from the early 1950s until 1969, its kits were issued in an eclectic diversity of scales and are now highly collectable. Their Jake was released in 1964 with the box art shown above and UPC re-issued it in 1968 as # 6071 with the box art presented as shown below. 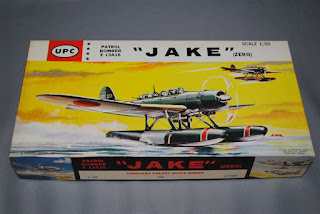 In his '20th Century Airplane Plastic Model Encyclopedia' ('20世紀 飛行機 プラモデル 大全' Bunshun Nesco Ltd 2004), Katsumi Hirano shows a variant presentation of the Marusan box (below), but without details of the date of issue. The art on this box is closer in presentation to the UPC box art. 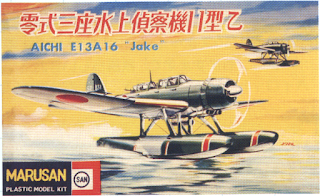 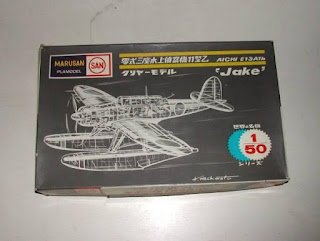 There are at least two other box arts associated with the Marusan kit. The monochrome cutaway art by K Hashimoto, shown above, is unusual because the interior details provided in the kit are sparse. Was this the same or a different set of plastic? Another box art style for the Marusan kit is shown below, with the logo 'Plamodel Marusan', again with no further details known. 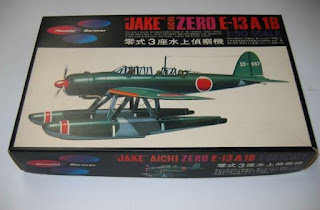 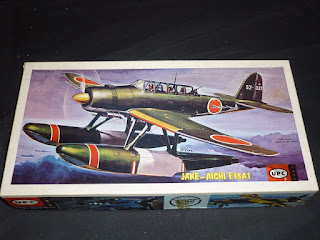 The more familiar UPC Jake box art is that by Andrew Scott Eidson (b.1908), shown above. As far as I know the box art for the Nichimo kit by Mr. R Nakanishi (b.1934) was never altered and like the Hasegawa kit it has been the only game in town in its scale. I'm not aware of any vacform or resin examples in either scale. Following Part 1 of this article Aviation of Japan's Texas correspondent Mark Smith kindly sent me this link to a splendid build of the Nichimo kit by Matt Swan. The Nichimo kit seems to have had more aftermarket for it than the Hasegawa kit, of which more anon, and Mark recounts that Mike West of Lone Star Models has told him that Jake items have been some of his best selling stuff. With the Hasegawa release of Pete and Dave surely Jake must be on the cards for re-visiting state of the art at some point?

Further details or memories about any of these kits will be very welcome, thanks.

Very interesting article, as always. I built the Nichimo Jake in 1986 and it was a beautiful model with working folding wings. I never sensed a difference in scale from my 1/48 models, the Nichimo Jake was big and so much fun to build and display.

Thank you for these two Jake articles. Most informative. I too hope for a new mold 1/48 Jake from Hasegawa. Also, did you mean Hasegawa
and not Tamiya in your story line about Dave and Pete. Although Tamiya did have a 1/50, old mold, Pete years ago. Rough kit.

Thanks both. Yes David, I did mean Hasegawa! Now corrected, thanks.
Regards
Nick

Great as always, Nick. Have never even owned a copy of this kit in either company guise, always looked like way too much work to bring up to standards. It would be perfect for Hasegawa to tackle in 1/48, with their wonderful Pete and Dave kits already out, they can do an early and late Jake and get many markings variants out of it, too.

Guys, as a reminder, please cast a vote on Hasegawa's web site for your suggestion of a future NEW kit release. A 1/48 Jake !!!

Thanks for the tour, Nick.