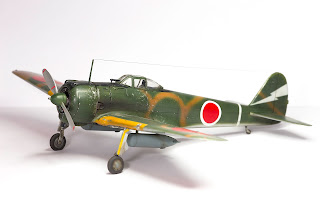 Francesco Borraccino has very kindly shared these images of his 1/72 Ki-43-I model in 11th Sentai markings crafted from the Fujimi kit. 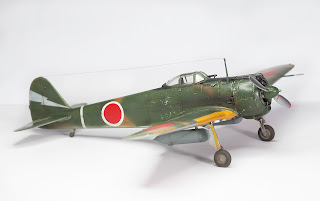 Although the Fujimi kit dates from 1994 (is it really 23 years?! Seems like yesterday!)  Francesco feels that it captures the shape of the early Hayabusa quite well. But he says that he is not a "rivet counter" and has not compared the kit against plans! The level of detail is good but he enhanced the cockpit using plastic strip and copper/lead wire. Seat belts were added using Tamiya tape with buckles fashioned from copper wire. 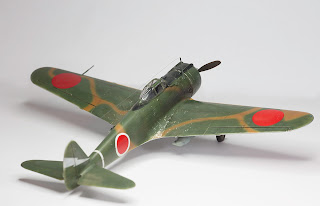 The build was straightforward until the kit canopy came to be attached which Francesco described as a nightmare! He found no clear indication or marks for positioning it and a poor fit. 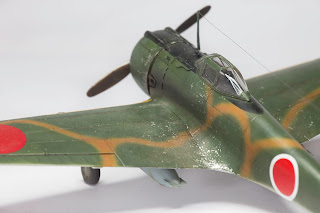 He finished the model to represent an aircraft of Hiko Dai 11 Sentai, replicating the scheme on the well known restored example. The green was matched to colour # 21 midori iro from the IJA KoKaku 39 standard, which he mixed using Tamiya XF-26 (Deep Green) and XF-65 (Field Grey). The unusual brown camouflage pattern was matched to # 33 kaki-iro (persimmon colour) with a mix of Tamiya XF-64 (Red Brown), XF-59 (Desert Yellow), XF-7 (Flat Red) and Gunze H-413 (RLM 04 Yellow). The undersurfaces were finished as natural metal. The wheel wells and inner faces of the undercarriage doors were also finished in aluminium at the time these photos were taken but Francesco subsequently re-painted them in the dark blue grey primer colour. The wing leading edge IFF strips were painted with a mix of Tamiya XF-3 (Flat Yellow) and XF-7 (Flat Red). 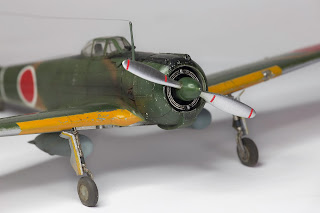 The spinner appears dark in tone in photos so Francesco interpreted it as the airframe dark green, following a profile in the FAOTW monograph*, with the prop blades in aluminium and their rear faces painted brown. Early production Ki-43-I had an aluminium painted spinner with polished metal prop blades and red warning stripes but later production aircraft had spinners and prop blades in overall dark brown with yellow warning stropes. The anti-glare panel was painted black. The drop tanks were painted blue-grey with a mix of Tamiya XF-23 (Light Blue) and XF-19 (Sky Grey). 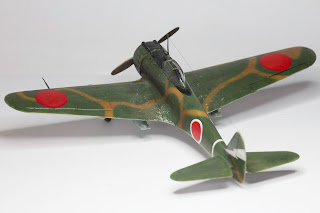 Francesco felt that the kit's hinomaru decals were too bright so he replaced them with some Techmod decals from a Kagero publication. These proved to be very fragile and not opaque so he discarded them and resorted to the decals from an old Hasegawa Ki-43 kit which he found to be satisfactory (a set of generic Army hinomaru with good opaque red is still needed). The Sentai insignia and senchi hiyoshiki fuselage band were painted on using a custom made mask. 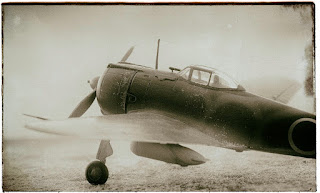 With special thanks to Francesco for sharing these images of his excellent model with Aviation of Japan.

Very accurate build and beautiful finish, thanks for sharing!
Maybe one day Tamiya will produce new tool Ki-43 too..

A pleasant model, the camouflage and scraping look very convincing. It would be interesting to know if the wavy brown lines were an original variation of the China theatre camouflage.
There is just one thing that keeps me wondering: Quite a number of Ki-43-I models have landing lights in the wing root. I have not found evidence of this feature on any pictures. I think they arrived with the -II variant.

The Fujimi kit includes the port wing landing light but it was only introduced during late production of the Ki-43-II. Hiko Dai 11 Sentai re-equipped with the Ki-43-I at Akeno in Japan and then moved to Burma for only two months at the end of 1942 before going on to Rabaul and the New Guinea theatre. The camouflage was probably intended for the Burma theatre as similar colours were found on 64th Sentai Capt Masuzo Ohtani's Ki-43-I shot down on 5/12/42 near Chittagong. 50th Sentai Ki-43-I also arrived in the Burma theatre from Akeno with green paint, later modified with brown disruptive camouflage.

Thanks Nick.
So, the landing light came with the change to the shorter-span wing during Ki-43-II production, I assume.

It's always great to see another Ki43 model here, especially in 1/72nd. I really like the finish on this one.

I don't have to hand the serial number or date for the landing light installation but it was added to the last Ki-43-II variant before the II Kai with individual exhaust outlets. Therefore early and mid-production II (with the outward facing exhausts) should also omit it. Bear in mind that despite kits, decals, profiles and plans there was no Ko, Otsu, etc., for the Ki-43-II and not all modifications or additions associated with a particular variant were made at the same time.

The painting is very well done. It shows that Francesco made it with love and passion for the subject. I think the paint job represents at least 90% of the general impression when someone looks to a model displayed on a shelf. So, minor flaws on details, especially on this difficult scale are forgivable.

Beautiful work, Francesco . Thanks for sharing.