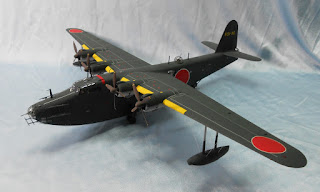 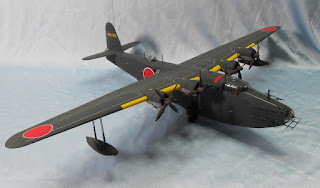 Stewart built the kit almost entirely out of the box and found that it is beautifully moulded and engineered. The kit includes a choice of bombs or torpedoes, a complete and beautifully sculpted, multi-part, crew of 12 – most of whom will never be seen again once the model is completed - and canopy masks for the main glazing. Stewart used an Eduard masking set for the fuselage windows which are not included in the kit's masking set. 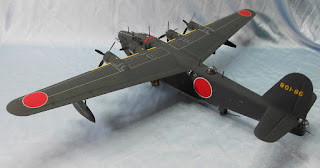 Stewart had no significant problems in construction and those small problems he did encounter were mostly down to him and his unfamiliarity with building such large models. Some clever engineering reduced the stress factor a bit, such as double spars moulded integrally with the fuselage bulkheads onto which each wing fits, which allows them to be removed for storage, and Hasegawa's usual poly-caps to retain the propellers without the need for glue, which made masking and painting easier too. 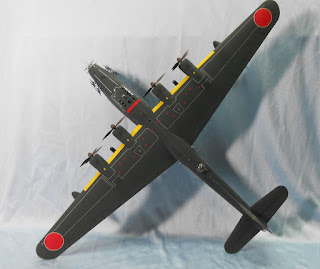 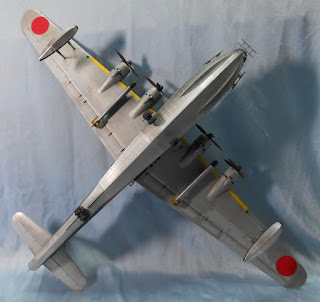 The kit decal sheet was used to represent the third option provided in the kit, an aircraft coded '86' of the 801st Flying Group. The decals seem quite thick but a review advised that they were perfectly usable. Stewart found that they worked very well after a few coats of Mr Mark Decal Softener despite the large area of carrier film between the printed lines of the wing walkways. He had a couple of issues with the leading edge orange-yellow IFF strips, and that was the one thing that with hindsight he would have done differently – instead spraying them on and masking prior to applying the main colours – but in the end he felt that they didn't look bad. 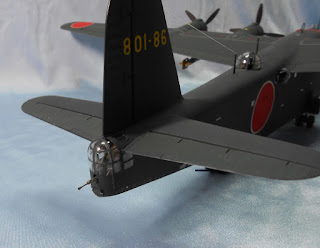 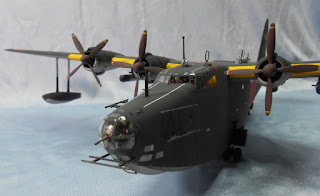 Stewart says that all in all it was one of the nicest kits he ever built and certainly the nicest large aircraft kit he has ever built, and he was very pleased with the end result. He should be! 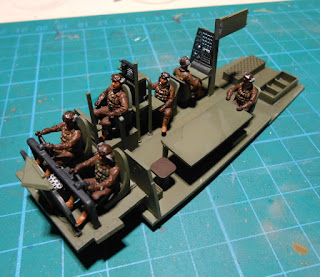 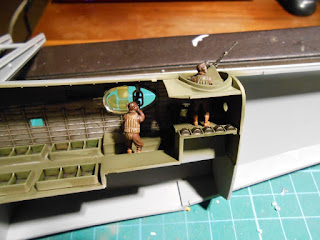 Dai 801 Kaigun Kokutai (801st Ku) was established in November 1942 from a cadre drawn from the Yokosuka Ku to conduct maritime patrols from Yokosuka over the Eastern waters of Japan. The aircraft originally utilised was the Kawanishi H6K Type 97 Flying Boat 'Mavis'  (Kyu-nana Shiki Hikoh-tei - 九七式飛行挺) with the tail code 'U3' but the unit was later re-equipped with The Kawanishi H8K Type 2 Flying Boat 'Emily'  (Ni Shiki Hikoh-tei - 二式飛行挺), the subject of the Hasegawa kit. After participating in the Aleutians campaign the 801st returned to Japan, based at Yokohama. In November 1944 the unit adopted the tail code '801' and was expanded to include the Saiun reconnaissance aircraft, Zuiun reconnaissance seaplane and Mitsubishi G4M2 'Betty'. The H8K flying boats then operated as Dai 3 Kaigun Hikotai with the Zuiun seaplanes. The flying boats participated in the Okinawa campaign conducting long range maritime surveillance patrols and a variety of supporting duties. 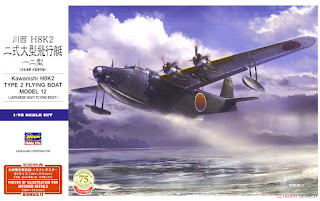 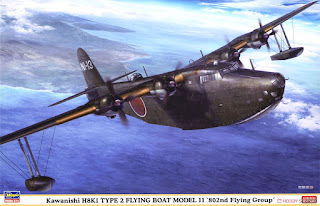 With special thanks to Stewart for sharing these images and details of the build with Aviation of Japan.

An excellent and beautiful build. He did a great job, especially with the decals. I have a friend that built the same kit and reported some problems with the silver decals for the top of the wing. (Same friend is scratch-building a 1/72nd seaplane tender to go with it. Wow!)
Thanks for posting his build Nick, I love seeing these built up.

Great to see this beautiful kit built, and so well at that. Now only if Hasegawa would do it in 1/48. ;-)

A superb model. Faultless and very clean - looks as if it comes right out of factory.

A very fine model, thanks Stewart for sharing the fruit of a big commitment! Regardless of the model's fine quality, any build of this size presents special challenges. Thanks for bringing it to us, Nick. - Mark Smith

A beautifully done kit. The crew are exceptional. Thanks Stewart your effort is well rewarded by such a high quality result.

Beautiful work, Stewart. Thanks for sharing.