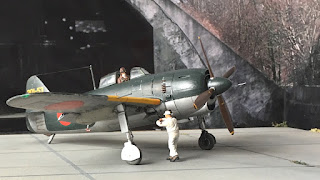 The Aviation of Japan blog is 10 years old today and to mark the occasion it is a delight to present another splendid rejuvenation project of a classic kit by Michael Thurow. There is no cake or candles today but Michael more than provides the icing on the cake with his re-build treatment of this Otaki kit. Over to Michael:-

Phoenix from the Ashes

Otaki (now Arii) was one of my favourite kit manufacturers in my early 1/48 years – mainly because in the seventies not many firms offered a well-rounded selection of kits in this scale. Besides Monogram (for US planes) there were Fujimi, Nichimo, a few Tamiya and – Otaki. Consequently I still own a considerable collection of their models which I purchased in this period. My Kawanishi Shiden was originally built in 1988, and I must admit that I never much liked my work. The kit is one of the early Otaki products with only a few unsophisticated extras: a simple engine, a basic cockpit and poor detail. However, like most Otaki models, it exhibits superb accuracy in dimensions and shape.

To complete my trilogy of late-war IJN planes (after Raiden and Suisei) I decided to try a full overhaul of this venerable model, and in all modesty I'm very satisfied with the result. This is a summary of my work:

After stripping, only the airframe survived, consisting of fuselage, wings, tailplane and cowling, albeit still in one piece - except for a detached cowling! 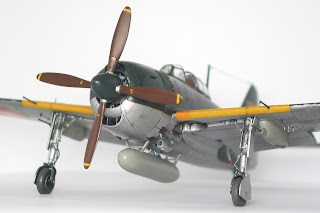 The upper and lower intakes were cut open and received new strakes. I fabricated open cooling flaps and added Quickboost #48565 exhausts which needed some adjustment. Note also the small air scoop below the exhausts on the starboard side! The front cylinder row of a Vector resin #48-016 Nakajima Homare upgraded the model's engine and the spinner received larger holes and cuffs for the prop blades. I opened the oil cooler outlet under the fuselage and added a flap. All flaps were formed from thin cardboard as described in my Shoki build report. Finally I cut revised ventilation slots into the forward fuselage sides with a Dremel saw.

Cockpit Area
The Aires #4539 cockpit is an excellent aftermarket item. I just needed to extend the side walls which the Hasegawa kit, for which it was intended, obviously did not require. To remove the old kit’s cockpit through the front fuselage opening, however, was a lot of difficult work because the floor reached into the wing root.

This was the most demanding undertaking since the only aftermarket item available for replacing the archaic kit parts are Quickboost undercarriage covers.

First I bored out the wheel wells which are too shallow (a typical issue with Otaki kits) by using a core drill. The wing/fuselage joints got in the way and the drilling became quite brutal. The kit’s plastic is not very heat-resistant, so care was needed to avoid melting it. I built up new wheel bays referring to what rare pictures were available, then attached the inner wheel covers from the Quickboost #48592 set and added a home-made snap bracket.

Turning to the undercarriage struts my work became most enjoyable. The Shiden's struts had a contraction mechanism with hydraulic lines, valves, joints and rails, none of which are present on the simplified Otaki legs – obviously a feast for my detailing obsession. For modellers who consider such folly too time-consuming an aftermarket strut set should be made available. It would be worthwhile but also boring...

It remains to be mentioned that I also corrected the kit's odd tail gear with some scratch parts.

I had built my 1988 model with extended landing flaps which I decided to keep but with some enhancement. This feature adds realism to the model since flaps tended to drop when the hydraulic pressure lessened after some time on the ground. 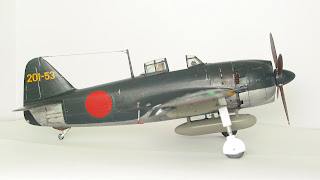 The next items on my list, Otaki's gun pods, were not bulbous enough. I wedged them wider at the top to form a trapezoid cross section. Surprisingly, thanks to superglue, the two halves didn't burst apart. I sanded the rear ends into shape and fabricated new barrel casings from unused 5 in. HVAR war heads. All four cannons are equipped with Air Master #48-021 metal gun barrels.

Last but not least I spent a couple of hours preparing attachment points for the 400 litre drop tank. I'm not sure if this addition makes the Shiden look any better - it rather emphasises the plane's stoutness. I might pass it on to an N1K2-J if I ever build one. Those who are familiar with this Otaki kit will detect other small embellishments that I have not listed here as I now want to share some thoughts about this specific aircraft. 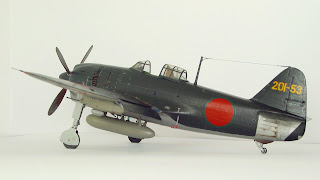 Surrendered in the Philippines

201-53 was production number 5511 built in October 1944 at Kawanishi's Naruo plant and delivered to the 201st Kokutai in the Philippines. 201 Ku was a Zero unit – one of the first employed for suicide attacks. I could not determine why the unit received Shidens and how many. FAOW No.53 (p.44) assumes that they were replacement aircraft. Thorpe 1977 (p.39) states that the Shiden was assigned to the 1st Buntai 'to develop special attack tactics'. Nick Millman comments that surviving Shiden in the Philippines were used as Tokko escorts or fast recce so it is possible 201 Ku received some for that role. 201 Ku's personnel suffered complete annihilation in ground fighting after all aircraft had been lost or disabled. 201-53 was found by American troops at Clark Field at the end of 1944 and this little-used airplane was duly vandalised.

I used Colourcoats ACJ01 for the topside D1 Dark Green Black. This was the easy part. With regard to lower surface 'camouflage', different views are presented in publications and internet forums regarding the question of grey or silver? It may not be true for all Shiden but the underside of 201-53 appears to be natural metal. The underwing panels show different shades which is typical for natural metal surfaces. I took Tamiya PS12 spray colour and hand-brushed some panels with a thin layer of lighter or darker silver.

The colour of the control surfaces (ailerons and elevators) is even more controversial. Covered with fabric they would have been doped with either silver or grey varnish. Though silver seems more obvious I chose grey because the original colour looks quite lustreless. I worked on the hypothesis that these parts were manufactured by subcontractors who painted them according to IJN directive with J3 Ash Grey, maybe even consuming a stock of pre-fabricated N1K Kyofu parts. My decision to also finish the gun pods in grey colour is definitely speculative, again suggesting that they came from subcontractors. On very early specimens like pre-production machines the pods look more like natural metal but those are of a slightly different type with access doors on the outer rather than inner sides. The pods for series production appear very smooth, as though made of wood, which would support my theory. I scrutinized dozens of pictures to form this opinion but it may all be very simple, say silver. However, the variation of colours does make for a livelier looking model. 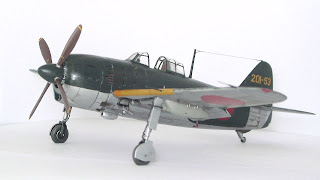 One final observation concerns the yellow wing leading edge stripes of 201-53. From a closer look it is apparent that the formerly narrow stripes were overpainted and broadened along the upper surface. A portion of the original (darker) stripe is still visible close to the wing root, on both sides of the airplane.

The Shiden is the last of three IJN warplanes that I wanted to create when I began two and a half years ago. They make a very nice collection but I have now had enough of dark greens and greys for a while. Colour needs to return to my modelling life and therefore I plan to indulge one of my other areas of interest - American fighters of the thirties. I hope to report back in a couple of years with a series of Ki-61/Ki-100 models. 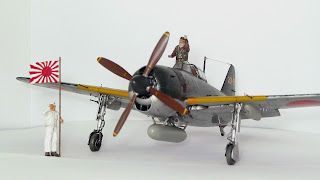 Wonderful! With very special thanks to Michael for sharing this excellent and most interesting project with Aviation of Japan. 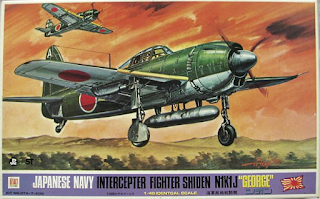 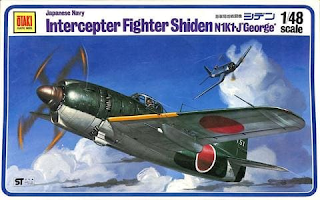 Congratulations on 10 years and thank you!

Michael, Great job on the (re)work of your old kit. I have just finished a Ki-100 (Arii boxing) myself.

Happy 10th Birthday Aviation of Japan. May you have many more!

Superb model, Michael. A far cry from box stock. You may have left out a lot of grinding, scraping, sanding, and blue air around the bench in order to accomplish this!

Congratulations to Aviation of Japan and to you Nick, for creating (for me) the most useful and accessible online archive of material on the subject, while welcoming the opinions and handiwork of readers worldwide.

Congrats on 10 years of great IJ content and here's to many more!

Congrats to you Nick, for the 10 years of unmatched quality and positive atmosphere here at this site.

Also rich congrats to Michael for the labor of love displayed in his images. A wonderful model of a beautiful aircraft.