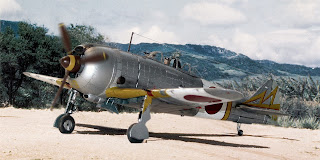 When Michael Thurow first sent me photos of his Ki-44-II Ko model in splendid 47th Hiko Sentai plumage I presumed at first it had been built from the Hasegawa 1/32nd kit. Then when it was clear that it was to 1/48th scale my presumption was still that it was Hasegawa's kit in that scale. In fact Michael's beautiful model is made from the 1970s Otaki (now Arii) kit and it is a delight to share his build report here. 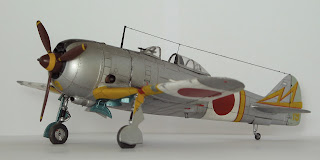 I first built this Shoki in 1982 straight from the box. The Otaki kit was the only one available at that time. It is a simple, straightforward model with shape and dimensions that are generally correct, a very nice surface representation with engraved lines and rivets, and an excellent fit of parts.

A few years ago I decided that it would need a considerable facelift to compete with my more recent models and I upgraded and re-finished it. I didn't want to buy the latest Hasegawa kit to start over and actually I like refurbishing my vintage models. Besides the nostalgia I consider it somewhat easier because all the weaknesses from the previous build can be seen.

For this project I purchased the following after-market items: 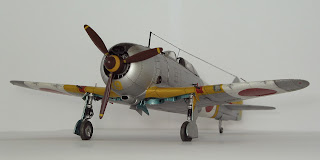 To begin with I scraped away the interior of the cowling front to widen it because as provided in the kit it is a little too small in diameter. I deepened the upper air intake, enlongated the oil cooler beneath the cowling and made its scoop more oval in shape. Then I drilled locations for the replacement exhausts and fabricated new cowling flaps. For cowling flaps I usually cut pieces from thin smooth cardboard then to produce their slightly rounded profile I roll back and forth over them with a narrow metal tube until they start to bend. After applying a thin, overall layer of plastic glue they can even be sanded and have a nice even surface for painting. 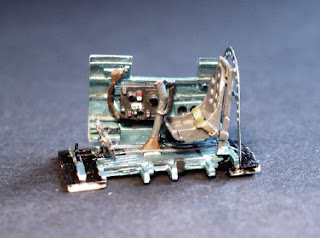 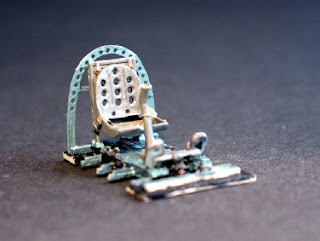 I completed and inserted the Jaguar cockpit interior set as shown above, then cut open the starboard cockpit access door and drilled holes in front of the wind screen to replicate the small air vents for the cowling machine guns. Since this is a Ki-44-II Ko version with 7.7 mm Type 89 fuselage guns the rear gills needed to be cut smaller from the ones that came with the Eduard set for the 12.7 mm guns of the Otsu. 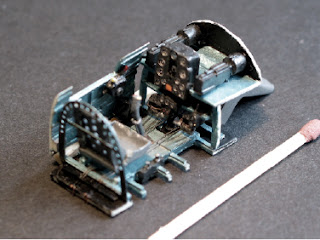 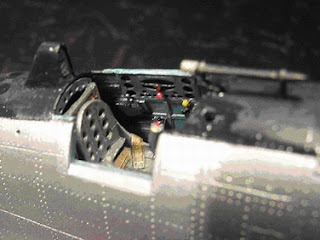 Next I replaced the ailerons and rudder with the Jaguar items but did not replace the elevators because intended for the Hasegawa kit the Jaguar parts did not fit properly. 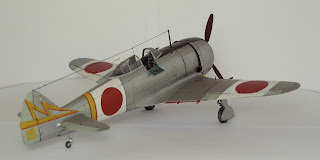 Note that the inserted elevator trim tabs were separate movable aluminium parts and not doped the grey-green colour. I realised this only after my model was finished. 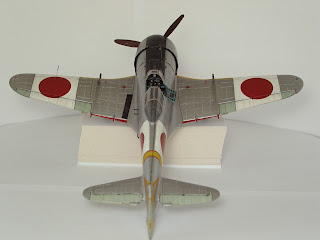 The wheel wells don't look like the original and had to be modified. The inner surface should have a curved profile with weight reduction and access holes while the kit provides a flat housing with imitated stringers. Most difficult was the creation from scratch of the small undercarriage retraction links that protude from under the wings since the Otaki kit does not represent those.

The tail wheel opening had to be enlarged and new doors were fabricated. This time I cut the door pieces from the sprue of an etched metal set and used the rolling method described above for rounding their profiles. Other small improvements included new 12.7 mm Ho-103 wing gun barrels, installing the leading edge landing light, and adding cockpit entry steps and landing flap rails.

As can be seen my model represents a home defence fighter from the 3rd (Sakura) Chutai of the 47th Hiko Sentai. My original 1982 model displayed the same markings but with black instead of red border to the fuselage band and tail insignia. This time I made more effort to approximate the decals to the original symbol shape as far as possible and in what I now thought were the correct colours. 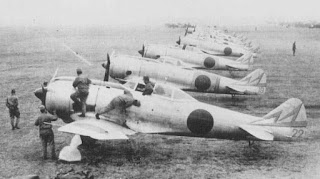 The photograph above and subsequent colour illustrations were reproduced many times in the last four decades interpreting aircraft #19 as belonging to the 3rd Chutai with yellow squadron markings. More recent research suggests that these aircraft belonged to either the 1st (Asahi) or 2nd (Fuji) Chutai and that the colour might have been blue with a black outline. Seventy-three years after some dilligent servicemen completed this nice paint job and with only b&w photos available it may be difficult to resolve the question of colour with any certainty. As long as there is some doubt about which Chutai #19 belonged to  I would not take the risk of changing the colour again - for now I like my Shoki the way it is! 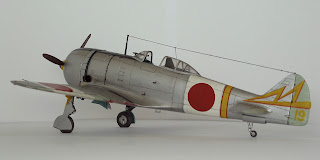 With special thanks to Michael for sharing these photographs and build report of his model with Aviation of Japan.

In his seminal partwork series from 1977 to 1979 in the Japanese Koku Fan magazine Minoru Akimoto gave the Chutai colour sequence for the 47th as 1st blue, 2nd red and 3rd yellow. That corresponded with the table in the 1972 Bunrin-do book 'The Japanese Army Wings of the Second World War'. Some doubt about this sequence was introduced by the authors of the 2009 Model Art monograph on the Ki-44 (Model Art # 779) who captioned a photograph of 1st Chutai fighters as having tail insignia in red or blue and further stated that Sentai Hombu (HQ) Shotai (flight) displayed white insignia outlined in blue. According to this account the 1st and 2nd Chutai tail insignia were outlined in black with the 3rd Chutai insignia outlined in red. The decision to show the 1st Chutai colour as red and the 2nd Chutai colour as blue in 'Ki-44 Aces' was based on photographs showing the aircraft of the 1st Chutai leader Captain Jun Shimizu and the 2nd Chutai leader Captain Yasuro Mazaki. The former revealed a fuselage band and tail insignia as dark as the Hinomaru and the latter tail insignia, a fuselage band and a painted spinner appearing significantly lighter than the Hinomaru but darker than the yellow leading edge IFF strips, all of which taken together appeared to contradict the colour convention! In the 2015 Shinkigensha book 'Imperial Japanese Army Air Service Illustrated (Fighters Edition)', which lists 'Ki-44 Aces' as a reference, Yukinobu Nishikawa illustrates aircraft # 19, the subject of Michael's model, with blue tail insignia and fuselage band edged black and identifies it as a 1st Chutai aircraft! Tonal interpretation is by no means definitive so there is room for doubt and convention often trumps revision, as in the case of two famous aces of the 70th Sentai, whose Shoki in model form almost invariably display yellow tail insignia that shoud be red!

Fantastic work! I think you and I are brothers under the skin. Lately I've been obsessed with building old kits - Otaki/Arii, Monogram, etc. and bringing them up to an approximate modern standard.

At present, I'm working on the Otaki N1K1-Ja Shiden, upgrading the cockpit through scratch building after studying photos of the real aircraft and of the excellent Hasegawa version. Also, planning to do the Otaki P-47 Thunderbolt.

Really beautiful model and great photography! I love those cowl flaps, and have never heard of this method mentioned. Thanks, Michael and Nick.

Many thanks to everybody for the compliments!

Hi Nessus,
Yes, we seem to have the same passion. I recently upgraded my F4U-1 (Otaki) and F6F-5 (Monogram) models. Would love to share the pictures with you. I built many of these old kits in the seventies and eighties and they do deserve a life prolongation.
My Otaki N1K1-J is on the list, too! I've already obtained a nice Aires cockpit set. You may want to consider this item.

Great work and a nice come back for a nice model which by far older than me!))
The result is worth the effort.
Thank you for sharing!

Very nice model, I particularly like the cockpit detail.

I will try and come up with a profile of this bird.

a very nice job indeed
hard to believe the Otaki kit can look that good :)