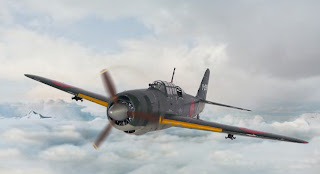 Michael Thurow concludes the report on his build of the Fine Molds 1/48 Kugisho D4Y3 Suisei with an absolutely splendid image of the model "in flight".

Part one of my modelling story here ended with the assembly of the fuselage. As I have described the Fine Molds kit is problematic in some areas but the biggest issues were behind me. I now needed to make a decision about the final livery of my Judy. I consulted all available publications for a suitable subject as I prefer building aircraft for which photos exist. My choice fell on リ-266 (ri-266) from the Hyakuri Kokutai, an operational training unit. リ-266 was involved in at least one combat mission in November 1944, flown by pilot Lt(jg) Kiyoshi Arasu with no navigator on board.

My selection was influenced by the shiny metal propeller and the pair of drop tanks, which both nicely disrupt the all too standard camouflage pattern, and the リ-266 decal included in the kit supported my decision. The two pictures published in FAOW and in Model Graphix show the plane from two different angles and give a good idea of the amount of chipping required. I modified a Model Graphix profile to visualize how the result ought to appear.

Judy Gets Dressed Up

The wings assembled easily and fitted the fuselage with little effort. To achieve the same dihedral on both sides I had to fill a small gap on the fuselage joint of one wing (I forget which). The moulded navigation lights were replaced by home-made transparencies all around, and a metal pitot tube from Fine Molds was added.

For D2 Green Black I mixed Revell 363 with 10-15% each of Revell 9 Black Grey and Xtracolor 504 Exhaust. The J3 Ash Grey is Revell 75 toned down with some Revell 84 Leather Brown. The correct size of hinomaru is best provided by the Revi 48002 decal sheet but they are extremely thin and have to be positioned quickly. I overpainted the original white borders by hand with a darker green. The fuselage was chipped according to the original picture and the wear around the control surfaces and the walkways followed the pattern seen in many photographs.

The wheel bays are fine and there is a photo-etched upgrade piece simulating holes. A well detailed pair of white metal struts and actuators is included in the kit. I just improved the brake lines only and drilled holes into the yokes. The excellent gear covers in the photo-etch set had to be shortened and required some grinding of the gear's protruding actuator connecting point in order to position the covers parallel to the struts. I fabricated my own brackets for the inner wheel doors - note that the doors are attached to the fuselage with a gap between wheel well and door hinge.

The wheels from the MasterCasters 48013 set, which I had purchased, have sprockets and were no improvement over the kit wheels (I didn't find any pictures showing sprockets). So I used True Detail wheels left over from my Raiden. A number of IJNAF planes, among them the J3M, N1K and D4Y, used Zero-type wheels. The tail wheel, though fixed in extended position, has shutters which I formed from stiff paper. They also help to conceal the poorly depicted transition between the wheel base and fuselage.


One reason for my choosing リ-266 was the drop tanks, as mentioned. Great idea, but where to get the right tanks? From the pictures I identified them as 330 litre late wooden tanks. After a long investigation I found them in Tamiya's J1N1-S Gekko (early version) kit, which was only still available through Ebay. It's a nice kit for future modelling and it will forgive me the cannibalizing.
The tank pipe had to be cut and moved in front of the attachment strut (reversed on the Gekko). The tanks' colour is mysterious. It appears darker than the green of the fuselage. Colour drawings in some books show a very similar, but not the same (metal) tank in black. I could not find black as a regular external colour nor a primer on IJNAF aircraft. Maybe the authors derived it from the rubber coating of self-sealing wing tanks, but external tanks were not thus protected. Since they were made from wood, I finally decided that the colour should be some sort of brown which would represent a glaze or lacquer as can been seen on wooden parts of some Japanese planes of the late-war period. I applied two layers of thinned black over it to obtain an irregular, streaky surface. 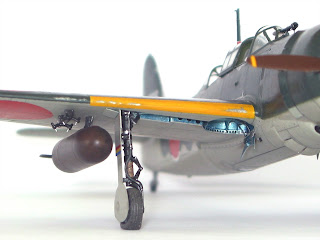 The kit provides nicely shaped pylons. Comparing them with dozens of photos they appear about 5 mm too long. Maybe different pylons were used for different bomb loads but I just couldn't find evidence of any elongated ones. So I cut away some length at the ends and in the middle, and added more detail.

The Trouble with the Prop

My last act in every build is to instal the propeller. Beforehand, I had attached the antenna mast, which is delicate work because of the small area for fixing, and had produced a foot step from small scrap. When you look at the aircraft profile there is a gap, about 1 mm in 1/48, between the rear prop plate and the front edge of the cowling. Of course I had checked the fit and perspective of the propeller a few times during the process. Now looking at my finished model I was frustrated by the unpleasant nose-heavy appearance of the large spinner! Re-measuring every detail it turned out that the Fine Molds spinner with back plate was about 1 mm too long. It would have been easy to cut while still in pieces. But now? Finally, by some sanding at the rear end reducing the distance to the cowling was successfully accomplished. What a difference a millimetre can make! (I'm ashamed to admit that during the on-off testing of the prop I eventually broke the antenna mast…).

All's well that ends well. After of a year-long modelling journey with many surprises I'm happy to have built this exciting model, and I hope that you enjoy the pictures as much as I enjoy my Judy. 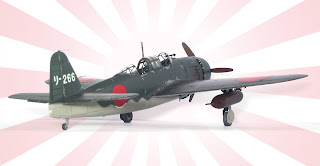 It looks really great, Michael. If I ever feel like a challenge again I'll build the radial engine night fighter version, so thank for the heads up on the spinner being oversized!

For me, this is certainly one of the better models featured here in the last few years, and the care shown in all the areas mentioned gives it that intangible quality of the real machine. Thanks for sharing this, Michael, and bringing it to us, Nick.

Thank you all for your kind comments. You encouraged me to keep up my holistic and evidence-based approach to modelling. Pacific Air War history is a fascinating subject. Cheers, Michael