Japanese Anti-Submarine Aircraft in the Pacific War ~ A Review 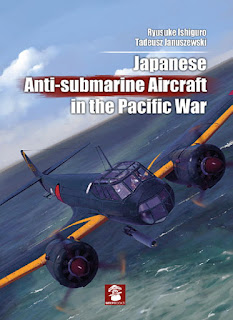 Japanese Anti-Submarine Aircraft in the Pacific War by Ryusuke Ishiguro and Tadeusz Januszewski, published by MMP Books, has been long and eagerly awaited since first announcement here in February 2017 and subsequent updates. This magisterial book does not disappoint and is an important addition to the accessible English language literature of WW2 Japanese aviation as well as an important subject in its own right. Far from being an arcane or obscure aspect of Japanese aviation the airborne anti-submarine response was a critical component of both Navy and Army airpower during the Pacific War, deployed against an increasingly effective, wide ranging and destructive Allied submarine campaign. The latter has been covered in the West to great depth in various books over the years but most of them have paid only superficial attention to Japanese anti-submarine warfare (ASW), either focussing on surface vessels or making scant reference to Japanese ASW aircraft, and usually in generic terms. Books on the development of Air to Surface radar follow a similar pattern, where the Japanese programme and projects are covered all too briefly, if at all, to no great depth and leaving many unanswered questions.

Here then is a book that sets out to answer those questions and delivers, often for the first time in the English language. But more than that it provides a seminal reference to the subject from the tactical to the technical, and should therefore leave no excuses for future naval historians of the Allied submarine campaign to omit its impact or reference to it. In that sense it is not just an 'aviation' book but is of undoubted naval interest as well. For modellers it should be required reading for any contemplating a collection of Japanese aircraft models in ASW guise - and there are plenty to choose from here! But, because many aircraft were adapted to the ASW role by both the Navy and Army the book is of more general interest too. Each type, whether adapted or specialist, operational or experimental, receives the same degree of attention, with full background, development history and operational use where appropriate, together with newly drawn and excellent plans. This coverage of some familiar types already described elsewhere might be questioned by some but this reviewer thinks the approach is correct. It results in a consistent structure to the book with all relevant information in one place, achieving a balanced presentation. Wiki entries on individual Japanese aircraft are patchy and too often full of errors. The standard English language reference work for Japanese aircraft in the Pacific War is the Putnams book, by R J Francillon, with the latest edition now being 18 years old. It won't be accessible to everyone and second hand copies are not cheap. Otherwise one must look to monographs on individual aircraft types with many gaps still to be filled. Too easy therefore to get drawn into reviewing a book from the perception of an interested and informed 'pundit' with an already extensive subject library, who might think that 'there is nothing new here' for those types, rather than to consider those taking up an interest for the first time and new to the subject. But in fact there is much that is new throughout this book and the authors have worked long and hard to unearth it. The whole package is excellent.

The book consists of 248 pages and is divided into sections with the first 11 pages covering patrol service, IJN units and tactics and sea escort service. There follows a detailed compendium of individual ASW aircraft, first Navy and then Army, examining their development and operational use, with performance data tables and, in some cases but not all, a discussion of their colour schemes with some interesting information and insights. These sections prompt the obvious gaps for kits, especially of Army types. New mainstream 1/72 kits for the Kyushu K11W Shiragiku, Kokusai Ki-76 and Tachikawa Ki-54 would be welcome! After the individual aircraft sections there is a chapter on patrol and anti-submarine aircraft equipment, followed by one on anti-submarine bombs and torpedoes, and finally an exposition of IJA aircraft carriers. Although individual these chapters link to present a holistic whole and a book which delivers a satisfying, well-structured read as well as a useful reference work to dip into as required. Of particular note is the inclusion of operational aircraft types which have received little detailed coverage elsewhere - the IJN's Kyushu Q1W Tokai, the IJA's Kayaba Ka-Go and Ki-76 Stella. That alone gladdens the heart but some of the even more obscure proposed and experimental types are described as well. The coverage is comprehensive.

There are 22 sets of aircraft plans, to 1/72 scale where feasible, 229 photographs, four in colour, and numerous diagrams and tables, as well as excellent colour cutaways by Giuseppe Picarella. Those detail the Q1W1 Marker Bomb Rotary Launcher, Q1W1 cockpit layouts and radar equipped B5N2 cockpit layouts. The photographs, albeit on matt paper, are clearly printed and presented to good sizes, the majority being absolutely relevant to the subject matter; in fact a remarkable compilation of many new and interesting images as well as some more familiar ones shown clearly for the first time. Collected at the rear of the book are 38 large colour profiles by Dariusz Karnas representing the aircraft types described in the text, with nine additional plan or detail views in colour. The profiles do not have individual captions which seems a pity, so that some controversial schemes like the blue Ki-51 of Dokuritsu Hiko Dai 49 Chutai (page 245), for example, have no further description or elaboration.  There are some minor typos in the book and some inconsistencies in terminology but those pale against the wealth of information provided and its attractive presentation. A video preview of the book from publishers MMP is available here and it is very highly recommended.
With thanks to Ryusuke Ishiguro and the publishers for the review copy.

Thanks for the review Nick! I've been waiting for this one to add to my library. Sounds very interesting indeed.

Thanks for this Nick, and congrats to Ryusuke, Tadeusz, and the artists. I can't wait for my copy to arrive (has been pre-ordered through Amazon and supposed to arrive next month).

Thank you Dan.
I hope you enjoy our book.

I just received my copy, and... WOW!!! It's an amazing reference, covering so many aircraft types in beautiful detail, and worth every penny!! It makes me want to rush home and build all of those planes I have in my stash!! This is one unique book that you will not regret having in your library.

One quick tiny addenda: the last H8K2 purchased by Ryoichi Sasakawa and installed at the Tokyo Maritime Museum has been moved to the Kanoya Air Field in Kagoshima.

My copy of the book arrived today, and I've just spent some time making an initial run through of it. I'm very impressed at the quality and depth of what is presented, the book is everything that I had hoped for. Again, thank you and congrats to Ryusuke, Tadeusz, and all involved with this project.

Thanks for this notice, Ryusuke & Nick.