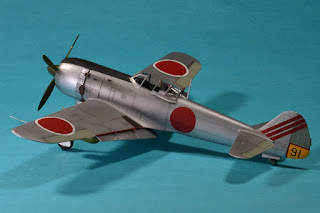 Courtesy of the good offices of AoJ Texas correspondent Mark Smith as go-between, Pat Villareal has kindly shared these images of his excellent Hasegawa 1/48 scale Nakajima Ki-84 Hayate 'Frank' model in natural metal plumage. The kit was won as a raffle prize in 2007 and tackled in a recent stash reduction exercise. Pat couldn't believe he had waited so long as he found it very detailed and a nice surprise to build. In his own words then. 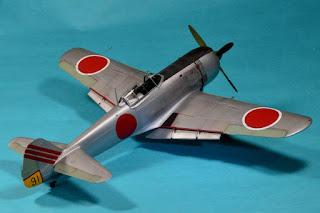 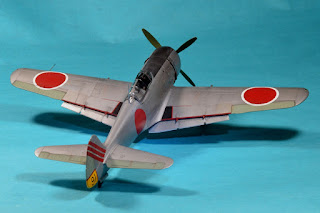 "After market items used were from an Eduard photo-etch set.  Most of the photo-etch got installed but the instrument panel is box stock since I thought the details were better.  Scratch-built items are the antenna mast and pitot probe.  The antenna mast is made from a flattened paper clip (pounded on a hobby anvil) and shaped with a file.   The pitot probe is made from a straight pin filed down at the tip.  The gunsight was improved by cutting off the molded reflector plate and a plastic holographic sequin cut to shape and installed in its place.  I also added a reflective circular green optical lens on the upper surface of the sight using a hole punch to give it a little more interest. 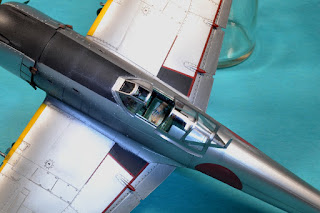 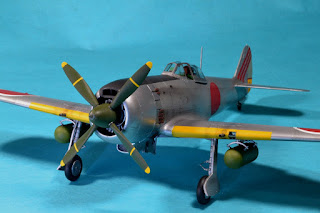 "Hasegawa decided to engineer this kit using a lot of polycaps to install the fuel tanks, landing gear struts, wheels, fuel cooler and prop.  For the landing gear this resulted in a wobbly stance and was hard to align correctly.  So instead I decided to glue sprue into the polycap casing and then drilled out installation holes to match the struts.  That achieved a more conventional kit installation and a firmer stance. 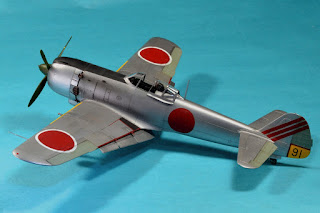 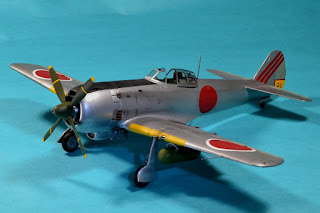 "The kit landing lights were extremely tiny and I considered them impractical for installation.  So I mixed 2-part clear epoxy and dabbed it into the light frame using a needle.  Once cured I painted them with Tamiya Clear Green and Red.  The results were much better than expected. 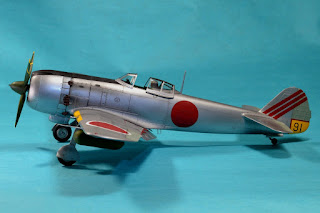 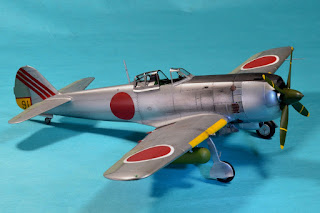 "Paints used were Model Master, Testors and Alclad with acrylics from Tamiya and Vallejo.  The plane was sprayed with Alclad Aluminum without primer, just straight onto the plastic.  However, I had to be very careful when filling seams since metallic finishes reveal every tiny flaw.   I brush shaded some panels with a cocktail of Future (Pledge - Revive It), water and different Vallejo paints (black, sienna, blue & sand) for color variation. 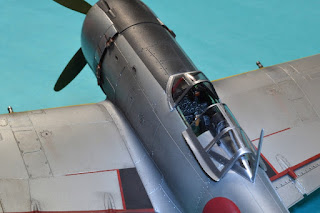 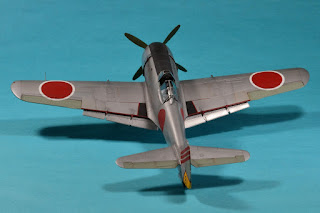 "Decals were from AeroMaster set 48-616 'Imperial Hayates Pt.II' and the color scheme represents an aircraft of the 2nd Chutai, Hiko Dai 73 Sentai  in the Philippines during 1944.  Micro Set and Sol were used in placing them and they reacted very well.  I did have to cut some relief holes for the upper markings to allow the aileron rods to protrude properly. Once the decals were cured I applied a coat of Future to protect them.  Then a few coats or Model Master clear flat lacquer in preparation for charcoal weathering. 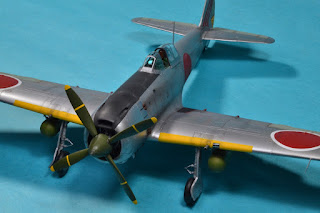 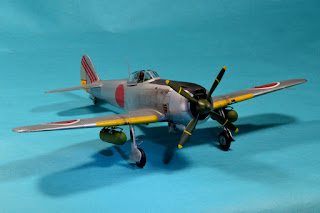 "Hard to believe I started this hobby with just a basic cheap kit, tube glue with no paint.  And now building models has become an adventure in using a plethora of materials, tools and paints.  Reminds of the Talking Heads song, “Once in a Lifetime” . . . . with a little play on words: 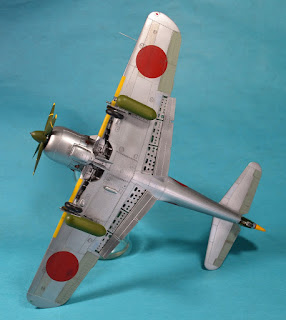 The 73rd was formed on the Hayate at Kita-Ise airfield south-west of Nagoya in May 1944 in preparation for the 3rd Phase reinforcement plan for the defence of the Philippines as part of the Hayate-heavy 21st Air Brigade with 72nd Sentai, the two Air Regiments of Hayate (1st and 2nd) to be be formed from the Akeno Army Aviation School and a heavy bomber regiment (3rd) from Hamamatsu Army Aviation School. There is a useful and illuminating history of this unit in Arawasi magazine Issue 10 of August 2008 although the 30th Fighter Group (第30戦闘飛行集団) to which it was eventually subordinated in the Philippines is incorrectly translated as 30th 'Combat Air Division' - 集 shû not shi 師!
With special thanks to Pat Villareal for the images and build report and to Mark Smith for facilitating. 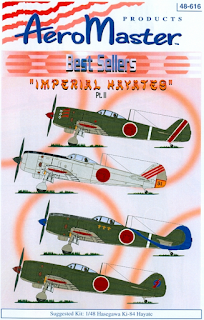 Beautiful model of a beautiful airplane. Great work, thanks for sharing.

Great work. Fit, finish and weathering are flawless in my eyes. Thanks for sharing.

Excellent work Pat! One of the most beautiful Hayates I have seen. Please add antenna wires to make it perfect.
I like your thoughts about 'How did I get there?' I started as you did (water-colouring my first Revell 1/72 models and protecting them with a THICK layer of houshold varnish!). There was no reference material either except the kits' instruction sheets and now a library with almost 1000 titles.

nice Model - well done , the Hasegawa
landing gear poly caps are just bad -
I reinforced mine with metal pins and never regretted it

Beautiful - thanks for sharing and the heads up re: poly caps . I have two of these in the stash and some Life Like markings as well .
Fine Molds 1/48 Babs have bumped them back a bit, however .

What a beautiful model Pat, very well done. Thanks for sharing it with us and thank you Nick for facilitating the means to do so as well as the history snippets you often include with the presented models.