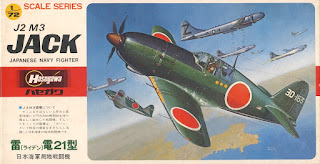 The venerable Hasegawa 1/72 Mitsubishi J2M3 Raiden 'Jack' kit of 1977 featured in Part Two of the 2011 Aviation of Japan blog A Gaggle of Old Jacks and Random Thoughts. A nice kit then and still now 41 years later, but falling behind the trend for super detailed interiors. Fred Boucher of Aeroscale has very kindly alerted me to his comprehensive reviews of four resin detailing sets designed for the Hasegawa Raiden by CMK (Czech Master's Kits). Click the set titles below for a link to each Aeroscale review. 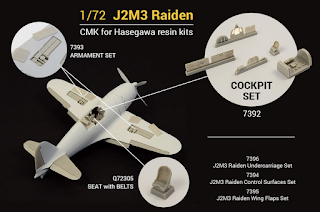 Resin floor, sidewalls, bulkheads, seat and other details, together with an instrument panel film. 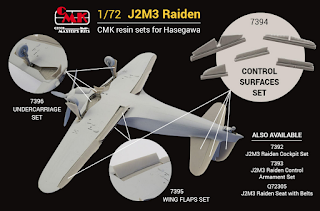 CMK also do a wing flap set as # 7395 and offer the pilot's seat with belts as a separate item # Q72305 for a quick upgrade of the kit parts. A vacform canopy is probably needed to get the best from the cockpit set but I was surprised to find one apparently absent from the excellent  Rob Taurus range. However a Pavla canopy for the Hasegawa kit appears to be still available. Brass cannon barrels and pitot for Raiden are also available from Fine Molds.

I'm not a 1/72 modeller but it warms my heart to see that after-marketeers share my passion for updating old kits. Thanks Nick