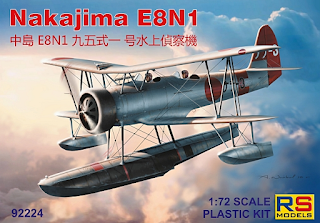 Hat tip to Iskender Mailibayev for alerting me to the new RS Models Nakajima E8N1 and E8N2 'Dave' floatplane kits in 1/72. Other than the Hasegawa 1/48 kit the last plastic kit of Dave was from Aviation Usk in 1/72 subsequently re-released under the Xotic-72 label. There may have been some resin kits but a resin biplane with floats in that scale is a thing to strike terror. 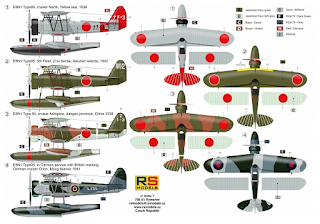 RS Models kit 92224 presents the E8N1 (heading pic) and features markings (above) for Dave as operated in the silver and red scheme from the Myōkō class cruiser Nachi in 1936, a 1942 Aleutians-based bord in the later dark green over grey scheme, another cruiser-based bird from Ashigara  in green and brown camo and finally, a nice touch, the bogus British floatplane from the German commerce raider Orion in 1941, the latter a subject of great delight for pontificating pundits of the naval persuasion. From the box schematic it seems that RS Models would have us believe that the IJN was applying RAF Sky to their aircraft at about the same time that Sidney Cotton was devising Camotint. 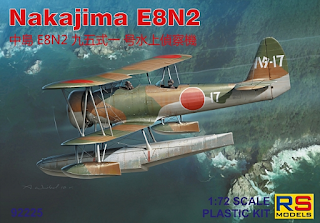 RS Models kit # 92225 presents the E8N2 (above) and features markings (below) for green and brown camo birds from the Hakata Ku and battleships Kongo and Mutsu, as well as another nice touch - a Royal Thai Navy floatplane in overall silver dope.  Dave was not just used for scouting but was belligerent over Shanghai and Canton during the early months of the Sino-Japanese war dropping ordnance, strafing ground targets and dogfighting when necessary. 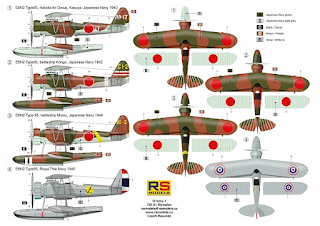 Will Hasegawa now scale down their Dave kit to 1/72? Probably not!

Back in 2013 this author wallowed in a review of the Hasegawa back catalogue of Ki-48 kits, that venerable but photogenic twin of Mania origin which is a favourite of his. The kit was subsequently re-released again as a Limited Edition in October 2014 with new box art (shown below) and decal options for two 8th Hiko Sentai aircraft operating over Burma. Then in September 2016 the kit was re-released once more in combo with the Ki-51 of similar antecedence to depict aircraft of the Hokota Army Flying School. The latest iteration released in September is a Limited Edition special attack Lily of the Banda unit (万朶隊 - 'ten thousand branches') with nose-mounted fuse extensions for an 800 kg bomb (box art shown above). The Banda-tai was operational in the Philippines during October/November 1944 and was one of the early Army special attack units. An in-box review by Aviation of Japan reveals the disappointing fact that the 'special equipment' consists of nothing more than a single length of brass wire to be cut and sharpened by the modeller to represent a triple or single mounted fuse extension and attached through holes in the nose transparency to be drilled by the modeller too (yikes!). No insight as to the internal arrangements of the fuse extensions is provided, no bomb and no guidance for the rigging wires shown on the excellent box art. The disappointment is compounded by options for two very plain late war schemes for the Banda unit, without any unit insignia. It's a nice kit which has stood the test of time and will be welcomed back in any guise, but perhaps just a little more might have been expected from a 'Limited Edition' with 'Special Equipment'!