With special thanks to Dan Salamone and Chad Akins for their kind heads up about the forthcoming Wingsy 1/48 scale Mitsubishi Ki-51 Sonia, announced for January 2019 release. Sample sprue shots are shown below and pre-production CAD renders can be viewed here. 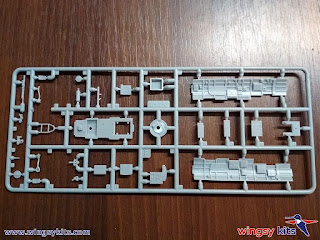 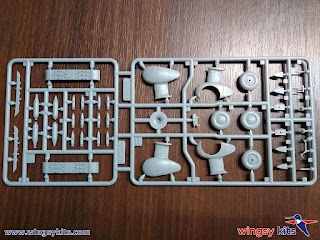 Splendid box art by Sergey Zoshchenko depicts a 1st Chutai Ki-51 of  Hiko Dai 27 Sentai with a very small pilot and an unusually complex camouflage scheme coming under fire from an AVG P-40.  This light bomber unit gradually converted to the Ki-51 from the Ki-32 in March 1941 and was active in the assault on Malaya, the Dutch East Indies and Burma.  The unit insignia on the fin and rudder combined the Japanese 'ni'  (二) for '2' in black with '7', the diagonal bar being painted in the Chutai colour. In addition to the tail insignia the 1st Chutai applied the representation of a swallow to the fuselage side, whilst the 2nd Chutai applied a stylised representation of the 'matoi' (纏), a battle standard or fireman's standard from the Edo period (as shown below), consisting of variously shaped heads, often with characters painted on them, and hanging strips. 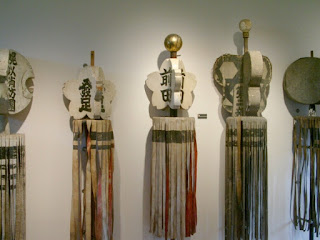 The price is not revealed but Hannants have the Wingsy A5M kits at £36.99 (about US$47) so start saving or be prepared to wait for your Christmas present. The new Wingsy kit should eclipse the veteran and long-cherished Nichimo kit of currently uncertain availability. Japanese birds with spats seem to be the currently favoured flavour so let's hope someone, somewhere, is planning a 1/48 Ki-36/55 (but please let it not be a well known purveyor of limited run vinyl).

Hi!
Hope to get this kit as soon as it became available and build it immediately!

Thanks for informing Nick, Dan and Chad. The question is, how much better than the Nichimo would this kit be. A comparative analysis would be very welcome once it is available.

FYI that on the Facebook page for Wingsy today, they posted this comment along with the 4 color and markings options:

"We finished work on coloring and marking options for our new IJA Type 99 army assault plane Ki-51 “Sonia” 1/48-th. And once again we remind You - how exactly the finished models will look like, depends only (!!!) on your choice and decision... Regards )))"

Thinking that I may go with all pink, featuring Hello Kitty markings then? ;-)

I've been planning on producing a 1/48 Ki-36/55 kit myself actually, although it would be resin and not injection-moulded. I have most of the means to do so and also some experience, having helped to produce a 1/32nd scale conversion kit this year. The only thing stopping me is time. 2019 looks to be very busy as-is, but with SLA (resin) 3D printers having dropped from tens of thousands of dollars to an amazing $250 already, the future's looking good for niche model kits in any scale.

A nice 1/48 conversion to have available would be for the Ki-79. Supplying the cowl and roll bar hump would save time and effort for scratch builders, and in theory less time consuming. I've seen images of the 1/32 conversion you helped with, it looks fantastic.