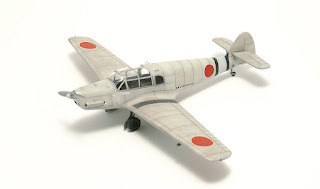 Zbyszek Malicki ('Zegeye') built this neat Messerchmitt Bf 108 'Taifun' in Japanese markings from the 2013 Fly kit in 1/72 scale and has kindly shared these 'walk around' images of his model with Aviation of Japan which it is a pleasure to present as the first blog of 2019. In 2017 the Fly kit was re-issued in two versions by Kovozávody Prostějov  (KP) with the resin parts replaced with plastic. The KP kit # KPM0081 contains markings for the Japanese civil Taifun J-BACC registered in August 1936 and as operated in China by Yomiuri Shimbun in a camouflage scheme. 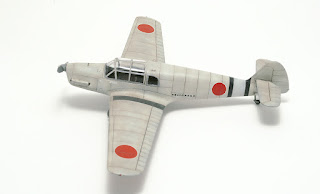 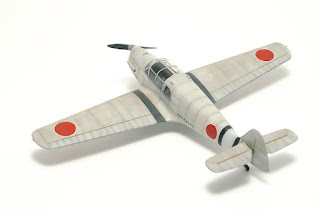 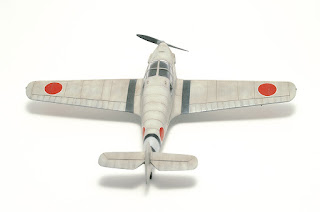 Zbyszek built the Fly model from the box, judging it a truly short-run kit with its soft grey plastic hard to work with. Earlier editions in brown plastic were of better quality. He found that the fit was poor, requiring a lot of filler. 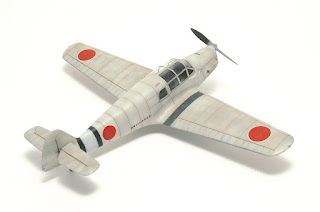 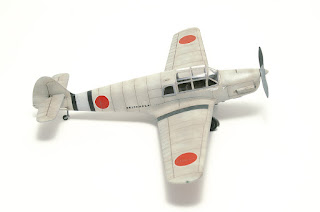 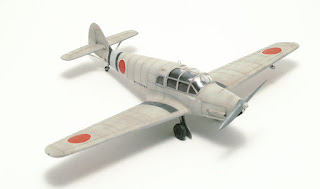 The exclamation mark decals in the kit were not used as Zbyszek considered them unlikely and possibly only dirt (or the remains of previous paint?). This Bf 108 had the Aikoku dedication # 258 reportedly from the Kyowakai organisation, formally the Manchu Teikoku Kyowakai (Manchuria Imperial Concordia Society), a political organisation avoiding the character of a political party and without aspiration to securing political power but functioning as a background organization to complement the activities of government, striving toward the achievement of an ideal of “nation building” (kenkoku).  Two other Kyowakai-dedicated Taifuns are known - # 259 and # 260. 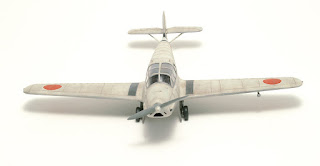 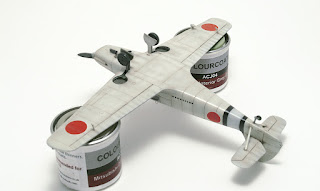 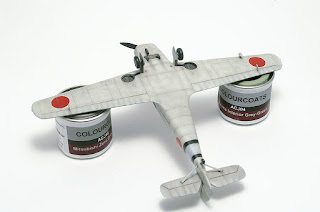 15 Bf 108 Taifuns of 21 sent to Japan were reportedly purchased by and registered to Manshû Kôkû Kabushiki Kaisha (MKKK - Manchukuo Aviation Co., Ltd), with 12 company registrations known (M-51 to M-62).  The remainder were operated by the IJAAF but the details of acquisition are obscure. The subject of Zbyszek's model has been presumed to be a civil aircraft because of the dark bordered white senchi hiyoshiki (戦地標識 - lit. 'war front sign') band on the rear fuselage, interpreted as being black. Civil aircraft were supposed to have red bordered bands but the black borders have been associated with civilian flying schools where in photographs they appear significantly darker than the national hinomaru insignia. However, officially the red of the hinomaru was supposed to be distinct from the red used for all other markings, being brighter and more towards an orange-red. 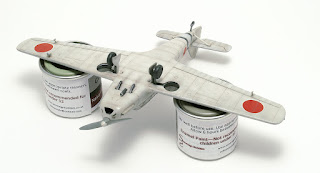 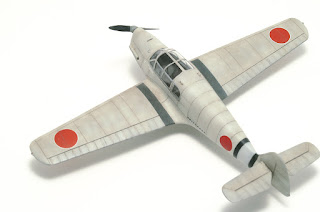 The model was painted with a mix of Humbrol radome tan and white to represent Zbyszek's interpretation of a sun faded RLM 05 Elfenbein (ivory) paint. 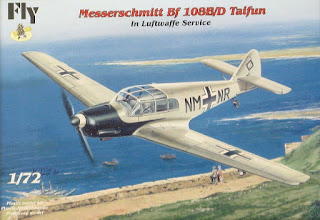 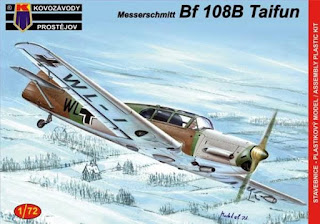 Lovely Model - thanks for posting

Excellent results from a challenging kit. Thanks for sharing.

Great workmanship and finish on this model, Zbyszek, thanks for sharing it. At first glance I thought it must be the Eduard 1/48 kit! A great way to kick off the year. Thanks for the many interesting posts in 2018, Nick.

The photo of the Ki-54 and the Taifun together is new to me also, and pertinent to the markings discussed, thanks. It's probably the kind of thing that can drive decal makers a bit mad.

My thoughts: First, I've seen the same black and white bands illustrated on a civil-marked Ki-27 and an overall olive-grey Hickory among others, and from photos of such, can certainly understand how the black was assumed. (I can also remember being fooled badly by black and white photos, however, when I later saw color images). Second, it seems intuitive for purposes of immediate recognition that the two-color band would be in Japan's national colors of red and white, but in that case, it's puzzling that the same red would not be used. Third and perhaps most important, however, since the Japanese Army directive of the time has been discovered, it's hard to imagine these orders being ignored or disobeyed in a bureaucracy of such rigid discipline, unless the order for red and white bands was superseded by one for black and white, and the change not yet documented by historians.

These don't add up to a particular claim on my part; though for many, the known directive of the JAAF probably trumps other considerations.

Nick, any thoughts on the consistent representation among Japanese illustrators of certain military airplanes sporting additional markings in the same red as the hinomaru? Some flashier examples that come to mind are certain 244th birds with their red tails and lightning flashes, the 84th Independent Chutai Nates in China, 64th Nates of the same time in China, late-war 246th Nates at Kakogawa, and the Shinten Sekutai (?) ramming units of the 53rd's Ki-45s and 47th FR Shokis.

Here my only guesses are that a) the prohibition against duplicating the hinomaru's red were relaxed in publicizing and lionizing certain units for publicity purposes and/or b) artistic license has carried the day in most depictions of these aircraft, since the matching reds would be generally more appealing.

Thanks for your comment. Both the IJAAF and IJN had a separate and distinct official red colour standard specifically for the Hinomaru but evidence for that distinction being applied in practice is tenuous. The majority of depictions make no distinction and I suspect the preference for most would be to show a consistent red on models.

Some wartime RAF aircraft had bright red on the fin flash and dull red on the fuselage roundels. Replicating that on a model would be accurate but perhaps look odd to the eyes of other modellers?