The Unknown and the Less Known from Rising in 1/72

Rising Decals have recently created two 1/72 decal sets in a new series for Unknown and Less Known Units of the Imperial Japanese Army and Navy. An excellent idea and one that will hopefully stimulate research as well as offer something unusual for better known models. 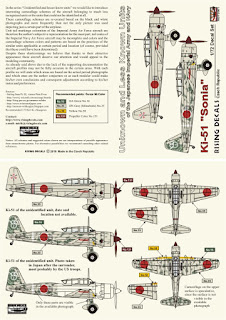 Set RD72081 offers decals for a choice between two Mitsubishi Ki-51 'Sonia' (Type 99 Assault/Army Reconnaissance Plane - Nana Nana shiki Shuugeki-ki 九九式襲撃機/Nana Nana shiki Gun Teisatsu-ki - 九九式軍偵察機 usually abbreviated as 99 Gun-tei 九九軍偵) of unidentified Army units and is designed for the Hasegawa kit. The first subject is depicted in an overall grey scheme for which Gunze 35 IJN Gray is surprisingly suggested. This aircraft has an interesting red, white and black tail insignia and matching fuselage bands. This consists of a propeller design of three oak leaves or hawk's feathers juxtaposed with three arrowheads on a central boss. Both the fuselage bands and insignia have separate white backing for perfect register. 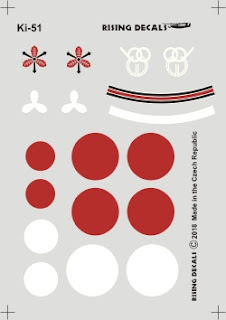 The second aircraft is depicted in a loose green mottle over grey, reconstructed from a partial photograph and has a device of interconnecting circles in white on the fin and rudder with white senchi hiyoshiki band on the rear fuselage. The two oblique interlocking rings which appear to be superimposed over a previous marking (?) form a mon associated in Japanese heraldry with Wakisaki Yasumoto (1584-1653), the Provincial Governor of Awaji. A set of plain Hinomaru is provided for the first aircraft together with upper wing and fuselage white discs to enable the second aircraft with white bordered Hinomaru to be modelled. 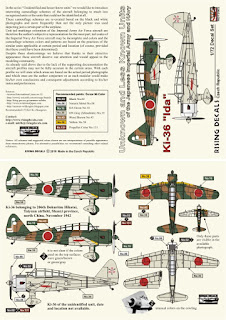 Set RD72082 provides decals for a choice of two Ki-36 'Ida' and states it has been designed for the Hasegawa kit, which should read the Fujimi kit unless . . . ! The first option is for a camouflaged aircraft of the 206th Dokuritsu Hikotai (Independant Air Unit) engaged in anti-partisan operations in support of ground troops from Taiyuan airfield, Shanxi province, North China during November 1942. This aircraft has camouflaged upper surfaces which are presented as either green over the overall grey or brown and green over grey. There is a brief history* of this interesting unit in Arawasi's Eagle Eye Series No.1 on Sonia and Ida as well as an excellent article, colour profile and five photographs pertaining to an accident report on this specific aircraft in Arawasi magazine Issue 12. A diorama depicting the force landed Ida would be challenging but all the information is there to achieve it - and now the decals! 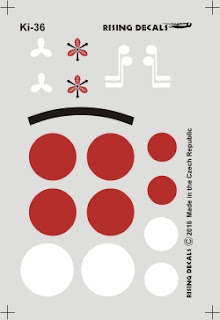 The second option is for an Ida from the same unknown unit featured in the Sonia set, in overall grey (again Gunze IJN Gray is suggested)  with a black fuselage band and unusual cowling markings, presented as silver but more probably, perhaps, yellow. Again plain Hinomaru for one aircraft are provided with white discs to enable the the option with white-bordered Hinomaru to be completed. Models of the Sonia and Ida from this unit would make a nice duo.  This new series is a welcome innovation which offers the opportunity to create models with unusual insignia that would otherwise be difficult if not impossible. 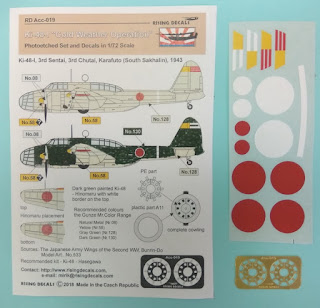 But it doesn't end there! Rising have also released three new combined 1/72 decal and accessory sets for the Ki-48 'Lily' and Mitsubishi 'Pete'. Set RD Acc-019 (above) provides decals for a choice of two Ki-48-I aircraft of Hiko Dai 3 Sentai during 'Cold Weather Operations' at Karafuto (South Sakhalin) in 1943, one from the 3rd Chutai's 2nd Shotai in overall grey-green (Gunze 128 IJA Grey Green suggested this time) and a second camouflaged example from the 3rd Chutai's 1st Shotai. The colour of the band on the tail fin and forward spinner identified the Chutai whilst the colour of the stripes on the rudder indicated the Shotai. The number of those stripes from one to three identified individual aircraft within each Shotai, but the order of the stripes is disputed with some asserting that three stripes, for example, indicates the first, or Shotai leader's aircraft, and others that that aircraft carried a single stripe. As with other sets enough Hinomaru are provided for one aircraft with or without white borders.   Also included with this set is a small brass photo etch sheet with two cold weather covers to be inserted within the cowlings to protect the engines. A neat and attractive set to enhance Hasegawa's venerable but admirable Ki-48 which always looks smart in overall grey-green. Add a diorama base with snow and even better! 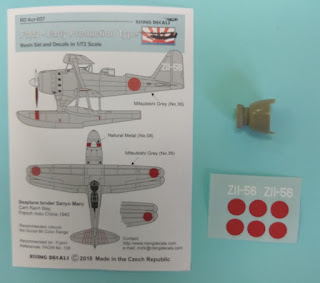 Set RD Acr-037 (above) contains decals, including Hinomaru, and a crisply moulded resin replacement cowling for an overall grey  Mitsubish F1M2 early production type with white tail code ZII-56 from the seaplane tender Sanyo Maru at Cam Ranh Bay, French Indo China in 1942. It is designed for the Fujimi kit. 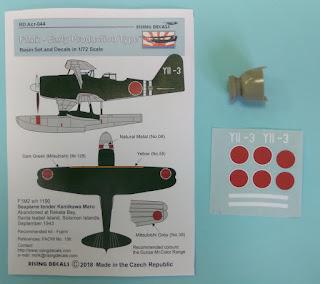 Set RD Acr-044 (above) is similar with decals and cowling for a dark green over grey aircraft with white tail code YII-3 of the seaplane tender Kamikawa Maru at Rekata Bay, Santa Isabel, Solomon Islands in September 1943. This aircraft has two white fuselage bands and an all-grey central pontoon float.  Although the instruction sheet depicts a yellow IFF strip on the leading edge of the upper wing photographs of this aircraft do not seem to show one. Some contradictory opinion about the markings of this and other Kamikawa Maru Pete may be found here and an ATIS drawing, reproduced too small to be much use, here. Pundits fill yer boots!

The decals in all these sets are sharply printed and with good colour saturation. The new series theme is most welcome whilst the small sets of photo-etch or resin accessories, attractively packaged and presented with decals for a single aircraft, are a great idea for ringing the changes from a standard kit. With special thanks to Mirek of Rising Decals for these review examples.

* Not mentioned in that history is that when the Air General Army was formed from 5-8 April 1945 206 Independent Air Unit was placed under direct 6th Air Army command and consisted of 206 Independent Air Unit HQ in turn commanding two component independent air squadrons:- the 1st engaged on anti-submarine operations and the 66th engaged on direct support operations. From July 1945 these two units came under direct 5th Air Army command in Korea, with the 1st at Kaiundai and the 66th at Pusan East.

It’s good to see that Rising Decals are addressing some of the more obscure markings out there. However, I would caution anyone that is using the decals to model F1M2 tail-code YII-3 (c/n 1190) that the two white fuselage stripes are not interrupted by the fuselage identification stencil. The stencil is immediately adjacent to the back stripe. This can be seen on the ATAI drawing of this aircraft posted on PacificWrecks: https://pacificwrecks.com/aircraft/f1m/1190/sketch-f1m2-yii3.html

Thanks Ryan. The Rising sheet does not include the stencil but in any case as shown on the instructions it would not fit in the location you suggest. The sketch at Pacific Wrecks is far too small to be useful. There is a distant view of the left side of this aircraft which is inconclusive and another photograph of the left side of a Kamikawa Maru 'Pete' about to be catapult launched where no stencil is apparent - and again there seems to be no space for one as the rear stripe is too close to the leading edge of the taiplplane.

I'll add those to the blog.


Imaginative products, and a nice review / article, Nick, thanks for the additional info. I first noticed those Lily cold-weather cowlings in photos when I got "Japanese Army Air Wings" when new in 1972 (in those days it was a highly advertised hot item at Squadron Shop - how times have changed). It only took 47 years to get them in model form! I too am impressed with what Mirek and Rising Decals are doing, and the ways he finds to bring new life and variety to older kits. Press on, sir!

Thanks Mark. The posts do take longer to prepare and write than the comments, especially the non-existent comments. . .

Ah,'Japanese Army Wings'! It seems only yesterday and how much happier we were with less rather than more.