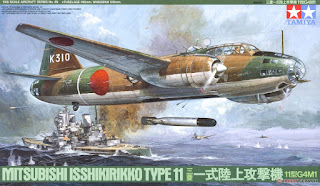 Amongst a plethora of interesting new releases from Rising Decals, a trio of welcome 1/48 scale decal sheets for famous wartime Japanese twins, two for Navy and one for Army subjects (with a Navy intruder). 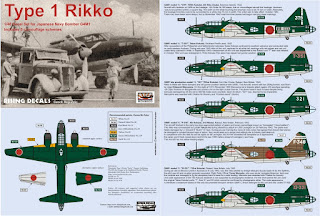 Set RD48022 (above) is for the IJN Type 1 Rikko   (1 Shiki Rikujoh Kohgeki-ki  一式陸上攻撃機), the Mitsubishi G4M1 'Betty' and presumably designed for the well respected Tamiya kit. It contains decals for a choice of five subjects with plain or white bordered Hinomaru for two aircraft plus two fuselage Hinomaru on white squares.  The options are as follows:- 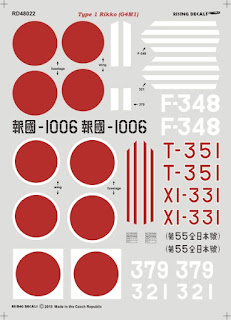 The question of Betty under surface colours is thorny. This author has a piece from the upper surface of a G4M1 shot down over the Solomons which is a very dark, rich and lustrous green, almost a black-green, and not at all like the bright 'garden shed' greens so often applied to models. The paint is of good quality and proficiently applied, with an almost ceramic surface. The few deep scratches reveal the same red-brown primer beneath as on the Zero which creates doubt that the under surfaces would not have been as carefully primed and painted as well. 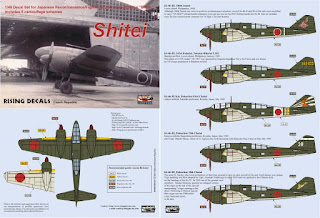 Set RD48023 (above) is for the Army Type 100 Shitei (100 Shiki Shireibu Teisatsu-ki - 百式司令部偵察機), the svelte Mitsubishi Ki-46-III 'Dinah' in both recce and air defence fighter guise, again designed presumably for the Tamiya kits. It contains decals for a choice of five subjects, four recce and one fighter version with Hinomaru for one model and a choice of plain or white-bordered fuselage Hinomaru.  The options are as follows:- 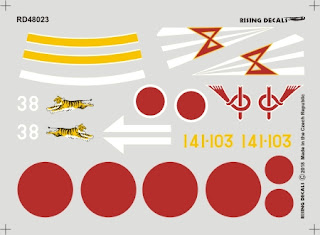 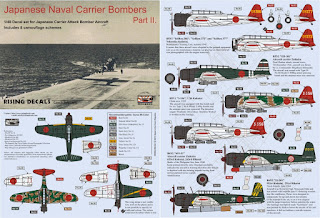 Finally the third set is RD48026 for Japanese Naval Carrier Bombers Part II (above). This features both the Nakajima B5N1/2 'Kate' and B6N2 'Jill' with no less than six subjects for the former and two for the latter as follows:- 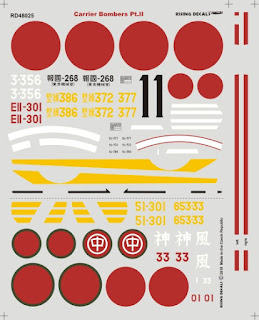 Some very interesting and well chosen subjects on all three sheets which will be appreciated by 1/48 modellers looking for something different. With special thanks to Mirek of Rising Decals for the notification and review samples.
Image credits: All decal sheets & instructions © 2019 Rising Decals; Heading box art © 1996 Tamiya Inc., via Hobby Search
Posted by Straggler 脱走兵 at 15:04

Thanks for posting this, along with your thoughts Nick. I pre-ordered the Dinah sheet last week when I first saw them listed, and I noted the Ki-46III Kai is not shown with the 37mm cannon on the profile sheet. Good to know this aircraft actually had it...

Thanks. Sorry to confuse but the Rising subject as presented is an Otsu without the oblique 37mm cannon. The 37mm cannon armed version was Otsu + Hei using that rare double suffix (also in use for some Ki-45 variants) with the Japanese 'purasu'(プラス) for 'plus' - thus spoken 'San gata Otsu purasu Hei Bohkuh Sentohki' but written as 'Otsu + Hei'.

Hi Nick, thanks for the clarification!

Nick,
Thanks for the heads-up, especially as these decals disappears so quickly. Mine are ordered also. Mirek, I would love to see some reprints of your Japanese subjects, which seem so hard to find, such as the 1/48 Zero items.

Dan, if you have Tom Laemlein's "Setting Suns" (the first volume), the intriguing Dinah interceptor from the 83rd is seen in its Ashiya hangar, its rear fuselage and left wing on trestles, with the right landing gear extended, in a three-quarter rear view on page 113. It shows that the wing hinomarus were plain with no home defense bands. To my eye no armament is visible, and the nose panel directly ahead of the windscreen appears loosely placed but not fastened. On page 119 and 120 may be seen both a -II and -III Shitei of the 106th, another interesting marking on this sheet; both are looking, as Don Thorpe once wrote, 'extremely retired,' but the tail marking is clearly seen.

Thanks Nick for the alert. I will get one for my B6N - Capt Hida's plane is so very attractive. Great background info, too.

Thanks so much for this Mark, it's appreciated! I do not own that book, but it sounds like I need to find a copy.

I also agree with your comment to Mirek about some 1/48 re-prints....

That 83rd Dinah interceptor was probably a Ta-Dan equipped aircraft as presented by Rising. Back in 2016 and FWIW when Rising released their 1/72 decals for this aircraft with resin Ta-Dan armament I wrote:-

"The 83rd independent air squadron was originally intended as the reconnaissance element of the 12th Air Division formed from the 19th Air Brigade on 17 July 1944 under Maj Gen Furuya, but as bombing raids increased two-thirds of the unit's aircraft were re-assigned to the Ta-Dan interceptor role. The 12th Air Division was formally assigned to the General Defence Command but operated under Western Army Command and the other units within the Division were the 4th, 47th, 59th and 71st Hiko Sentai. The 16th Air Brigade (51st and 52nd Hiko Sentai) and 246th Hiko Sentai were also attached to the Division. The 246th gave birth to the 82nd independent air squadron, designated in February 1945 with a specialist high altitude interception role and also equipped with Ki-46-III fighters. The relationship between the 82nd and 83rd, if any, is unknown."

I should add a link to the 2016 blog to the article above and will do! Someone once commented that you could search this blog "until the cows come home" which probably (partly) explains why so much I have recorded here gets ignored elsewhere as wheels are re-invented!

Hi Nick, thanks for this. Now that you brought it up, it does "ring a bell". It would make a great model with the weapons mounted for sure.

That's right Nick - the thing with the cows I mean. On a number of lonely hotel evenings during a project I scanned through all the blog entries and compiled a list of references to those topics that may once be of interest to me. With this I preserved your precious work for my future models.

Oooh, that last Jill is a must have!