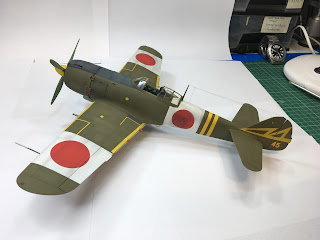 Dennis McCone has very kindly shared these images of his fine looking build of the ever popular Hasegawa 1/32nd scale kit of the Nakajima Ki-84 Hayate 'Frank' as an aircraft of the 3rd Chutai, Hiko Dai 47 Sentai at Narimasu airfield in February 1945. Dennis writes of this project:-

"Well after about a year I have finally put this one to bed, the kit is typical Hasegawa, a great fit and a pleasure to build. The paints used were Sovereign Colourcoats, Xtracolor and Humbrol and all the markings were painted on using Makatar paint masks except the '45' on the tail and some red stripes on the tail markings which were from decals. Some of the cockpit parts were Aires but I did not use the complete cockpit in order to save time (it didn't!). I am also not keen on lowered flaps so I modelled mine raised after seeing a build on Hyperscale in which the builder had raised his. I also referred to a couple of builds on the Large Scale Planes website as guides as well. 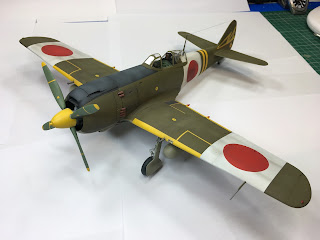 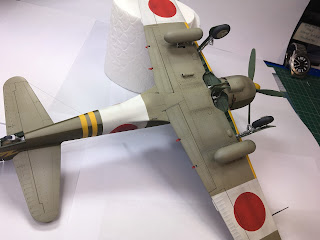 "I am really pleased with this one, the topside paint is Sovereign Colourcoats ARJ01 (same as ACJ22) which is matched to IJAAF # 7 Ohryoku nana go shoku. At first I was disappointed that it was matt but it airbrushed beautifully and gave a great finish. With handling the finish was matt with satin patches and looked fine. It is a shame that I could not replicate it at the end but for me a satin varnish coat (Xtracolor) looks better than a dead matt finish. The under surface is Xtracolor X-16 Hemp. 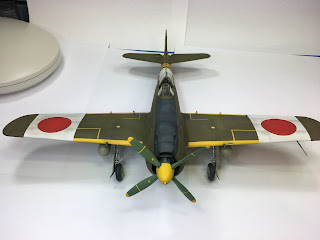 "I finally cracked the undercarriage hydraulic lines detail thanks to some good advice, but I am still not keen on aerial wires. This one took two attempts and it is still not anything to write home about! and  I forgot to weather the prop and spinner, but will get round to it." 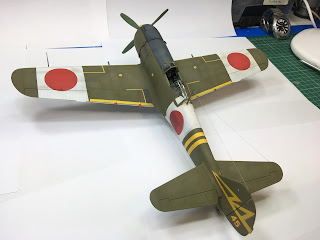 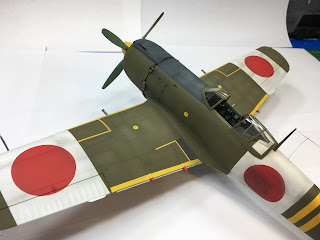 With thanks to Dennis for sharing the pics and details of his build.

This is a great representation of the Hayate. As I already commented at BM it's nice to watch the beauty of a Ki-84 without over-weathering. Well done Dennis!

Thanks Michael. I already knew this one had been posted at BM when Dennis sent them to me.

Thank you all for your nice comments.

Beautiful build! Thanks for letting us see it. The Hayate gets a lot of play among builders for its beauty of design and markings possibilities, but it's refreshing to see one built in relatively clean condition.