Photographic Deception and a Sparkling Trio 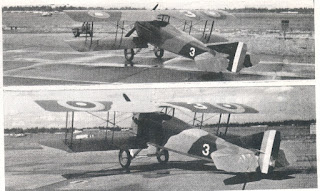 The two images above are of the same re-built Spad VII and featured in the August 1957 issue of the British magazine Air Pictorial with the following caption:-

"A good illustration of the effect of film types and filters on colour rendition in black and white photography is given by the two views of a rebuilt Spad 7. The upper photograph is on orthochromatic film with no filter, the lower photograph on panchromatic film with a red filter. Notice especially the reversal of tonal values of the fin stripes; the foremost colour is in faint red."

There are pundits on forums who will wax lyrical about being able to identify the film and filters used in order to determine the original colours but the reality appears much less predictable. Of note is the way the tonal contrast shifts and renders the lightest of the camouflage colours very much lighter - pertinent to those long (winded) discussions about Vildebeest colours. And whilst the known colours of insignia are sometimes a guide, in the case of WWI US colours the blue of the roundels is the subject of much disagreement. Note how the outer ring of the roundel on the port upper wing in the top photo almost disappears against the camouflage.

Another factor, not mentioned in the original feature, is that both photographs are taken under different illuminants. The top appears to have been taken in dull overcast, perhaps after rain, whilst the bottom has strong shadows suggesting sunlight. That will affect the reflected light from the surfaces of the aircraft too. This is nothing new - film, filter and illuminant - but it is surprising how often it seems to be disregarded in the passionate interpretation of colours from greyscale. 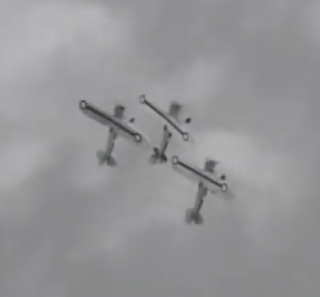 Secondly, there is a brief and extraordinary sequence from the 1939 Laurel and Hardy film 'The Flying Deuces' where a vic of three RAF Gloster Gauntlets are seen performing an aerobatic climbing roll in very tight formation. A search for the rest of that film sequence (taken at Hendon?) has proven negative - how it ended up in a Hollywood comedy movie is anyone's guess! But it is magnificent to watch. You can see it here from 38:24:-

The rest of the film is hilarious and a masterpiece of comic timing. Any pointers as to the location, date and squadron/team identity of the flying sequence or whether a longer version exists anywhere will be welcome, thanks.

An excellent example of how the colors change, dependent on the film type (and conditions). Thanks as always for sharing this with us Nick.