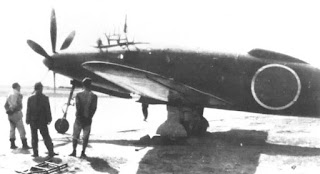 Another 'lost and found' RAF Flying Review article in this occasional series, this time from the March 1959 (Vol.XIV No.7) issue and featuring an interesting account of the Yokosuka (Kugisho) R2Y Keiun (景雲 - 'Auspicious Cloud') experimental reconnaissance aircraft by Mr Ichiro Naito, translated by Mr Takeshi Hattori and published therein by courtesy of the Japanese magazine Aireview. 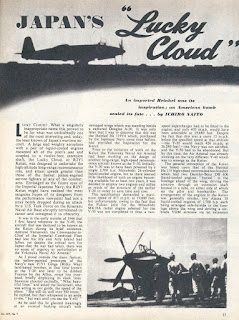 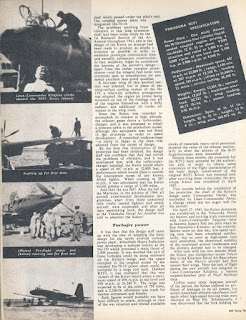 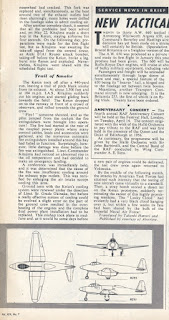 English language data on Keiun is sparse so Mr Naito's first person account is especially welcome for its details even if 60 years old! A Model 2 (R2Y2) variant of the type was planned to be powered by a Mitsubishi Ne-330 turbo-jet engine fitted to each wing (as shown above in the article's side-view plan). 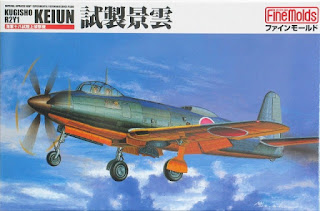 Fortunately for those modellers interested in Japanese experimental types there is a decent 1/72 kit of the fascinating Keiun by Fine Molds. First released in 1995 it was re-released in 2001 with new box art depicting orange-yellow under surfaces. The kit is currently in stock at HLJ for a very reasonable £11.91 (US$15.91) and there is a photo-etch details accessory set AA-17 available separately at £7.74 (US$9.92). A 1/72 resin model of the turbo-jet powered R2Y2 was announced for release this month by International Resin Modelers but comes with a hefty price tag of US$100 for non-members. 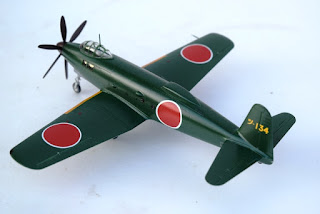 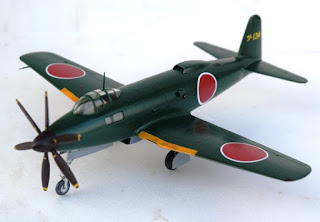 A splendid model of Keiun built from the Fine Molds kit is shown here (above and below) courtesy of the builder Mr Hiroyuki Kato via Mr Hiromichi Taguchi, the editor of the excellent Japanese monthly web magazine Web-modelers. Mr Taguchi's web magazine should be of special interest to those who enjoy seeing older kits as well as recent releases carefully built and painted. The magazine also features nostalgic articles about Japanese aviation and modelling history, including past times Japanese model shops and  modelling magazines. All the back issues of the magazine can be browsed at the website. 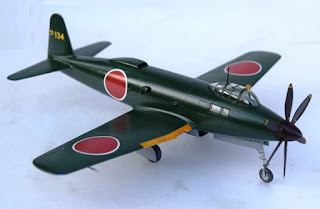 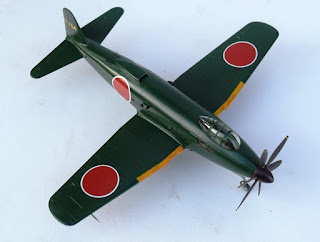 With special thanks to Mr Hiroyuki Kato and Mr Hiromichi Taguchi for their kind permission to share the images of Mr Kato's Keiun model with Aviation of Japan. The RAF Flying Review article is from the author's own collection of the magazine. Please credit and link to Aviation of Japan if referencing this article or its contents, including Wiki updates, thank you.

Great post Nick. I love these old RAF Flying Review articles and any other out-of-print articles you post. It is much appreciated.

Great, great post, Nick. Love those blasts from the past!
Any little bit of information about the Keiun is always welcome, since I have the kit in the stash but there's not much about the aircraft around.

Wonderful post, Nick! I really like this way of sharing treasures that most of us have never seen and which, as far as I know, have not been properly archived for access. Flying Review and Air Enthusiast were streets ahead of American aviation magazines when I first stumbled on them at MAL Hobby Shop in Irving, Texas, but were expensive propositions in their day, at least when imported. Although some of the things I wished I could afford, they were usually trumped by a Japanese book or model I just had to have. But MAL had those too - a one of a kind place, and still in the same family, at 108 S. Lee Street.

Here's to another edition soon, and thanks.

Thanks very much for sharing these articles Nick. I never thought I'd have a chance to read such treasures.

Many thanks for the excellent post, Nick. As Daniel wrote, any information on the Keiun is very welcome.

As for the Fine Molds kit, it was the very first product of the firm I bought, in 1999. For a model released in the mid-1990s, it was quite good and makes for an interesting conversation piece once built.