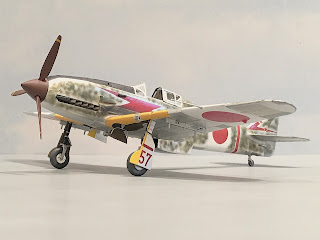 The Tamiya Hien Tei kits in 1/48 and 1/72 are deservedly popular, reflecting a general popularity amongst modellers for the Japanese Army's only inline engined fighter. There was a scattering of disappointment at the outset that the chosen Tei variant offered less choice of schemes than other variants but that seems to have abated. In fact production of the Tei straddled both the factory finish natural metal (with or without depot applied solid and mottled camouflage schemes) and yellow green No.7 eras. Louis Gardner has kindly shared his observations about Tamiya's 1/48 kit together with his report of building the fine 244th Sentai example shown above. In his own words then:

"This is a model that I completed a couple of months or so ago. It also happens to be my favourite Japanese fighter from the war, it is so elegant and streamlined. The Tamiya new tool Ki-61 kit # 61115, fit together perfectly, the engineering being so clever and precise that I didn’t feel the need to glue several parts in place. However I still used glue throughout the build just to be safe. 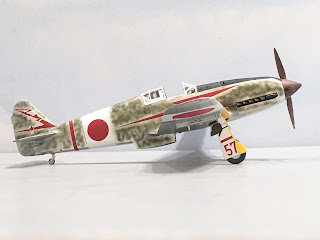 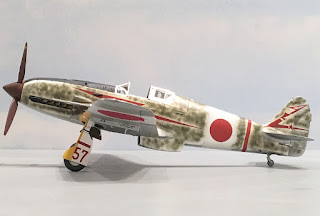 "I wanted to build an example of the 'long nosed' Tei variant Tony - and something besides the usual ones you normally see with the red tail that is commonly associated with the 244th Sentai. I had a set of older Aero Master decals dating back to 1995 which included an option for a long nosed Tony with tail markings from the 244th Sentai. The plan was coming together and fortunately for me the old decals worked flawlessly. I discovered that Lifelike Decals also produced a more recent set of decals (48-003R) for this same aircraft and the markings appeared identical to Aero Master's, so I felt better knowing this, as Lifelike does considerable research on their subjects. 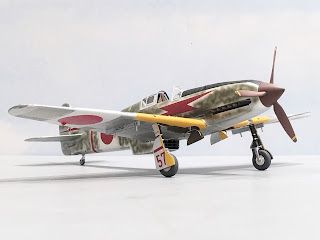 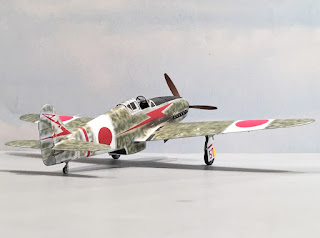 "Some time ago I had done an online in box review of the Tamiya kit shortly after it was released. Ever since then I had been wanting to build it as I was so very impressed with the contents of the box.  I finally said “to heck with it” and simply opened the box and got busy. Sometimes taking the first step is the hardest thing to do. I still have a set of decals for a 68th Sentai example and will eventually build one using the older (but still highly acceptable) 1/48 Hasegawa kit. In order to build that model I will have to use the “short nosed” variant, in combat earlier and more often encountered in the skies. 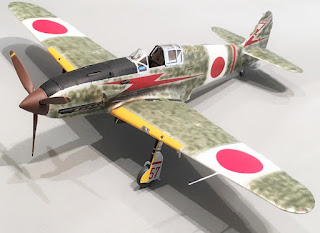 "The Japanese were very proficient at using camouflage. It varied from using freshly cut vegetation from the nearby jungles to conceal the planes, to spraying on various squiggly lines and shapes over the natural bare metal finish that most Tonys were delivered in. This was often done using as little paint as possible, since it was in short supply. The ground crews often applied just enough to knock down the “shine” of the bare metal. Sometimes this camouflage paint was applied using a brush, while at other times it was sprayed on.  The application methods and styles varied considerably, even between aircraft of the same unit. I tried to replicate the look on my model by doing the same thing. If you look closely, you can see that the stencils are still readable. In the image below you can see just how effective this camouflage process actually was. On one side I left the plane in a highly polished finish that was created using Bare Metal Foil. On the other side I simply sprayed on a light coat of green squiggly lines of various intensity. 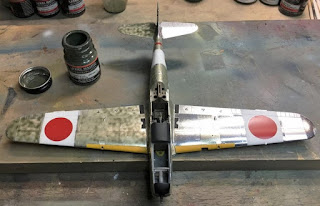 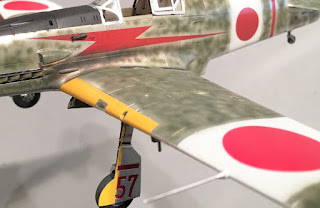 "I wished to make this plane look as if it was flown, but not “war weary”, so I added some exhaust stains using Tamiya weathering decks to create the exhaust patterns. You can see this darker streaking in the lower portion of the image immediately above.  You can also see how the area around the canopy was left in a natural metal finish. I also tried to recreate a few very small scratches into the green sprayed on paint. If you look closely you can see a few where the pilot would have made them as he entered the cockpit. 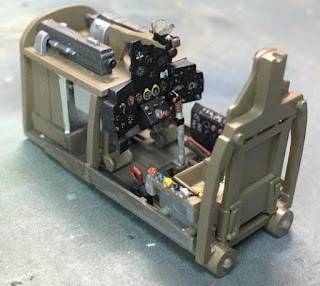 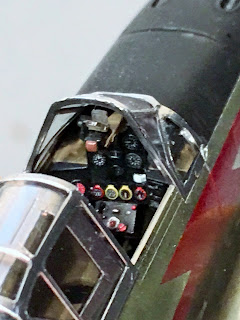 "Tamiya has captured the cockpit very nicely. This is exactly how it looks right from the box. No aftermarket parts were added. However, if I were to build this one again, I would add a different seat harness. 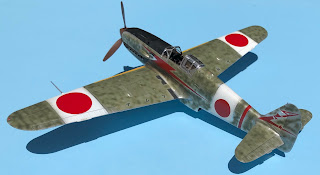 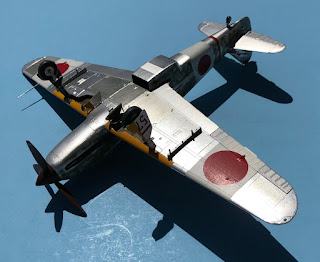 "The other pictures here show the plane as it looks from directly overhead, and from various angles. From this vantage point you can see just how effective the green paint was at reducing the shine. No other coatings were used on the top side of the model other than a very light coat of green. The shine of the bare metal was highly reduced with a minimal effort. Initially I tried using a semi-gloss Testor's Dull Coat spray coating directly from the can to knock down the shine somewhat. This helped, and was a step in the right direction, but it needed more to achieve the appearance I wanted. So I went back a second time, and lightly applied another very light coat using Testor’s Dull Coat right from the spray can. This gave me the result I was after - the light was still reflected from the foil, but now it had a more oxidized appearance. If you look closely at the images you should be able to see what I’m talking about but for the best and most natural look it has to be seen in person and in natural sunlight. It really pops !

"The following photos show the kit during the construction phase and you can see how shiny the finish was by using the three different shades of Bare Metal Foil. I used Ultra Bright Chrome on some panels, Chrome on others and Matt Aluminum for the remaining areas that had to be covered.   I tried to mix things up and not have two panels located next to each other in the same color, to give the illusion that each panel was a separate sheet of aluminum as it was on the actual plane. 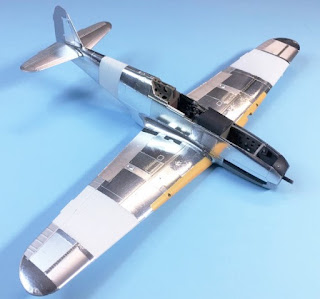 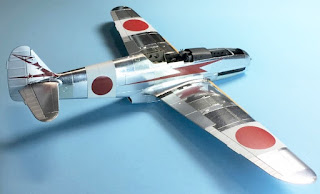 "You can see the decals as they were applied but believe me it was hard to start spraying on the green over this beautiful foil. A part of me wanted to leave it alone, since I really like this look, but I wanted it to look more authentic, so I decided to start covering this beauty with some green. Now I’m happy that I did… 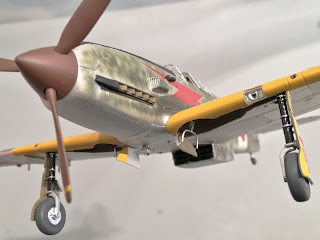 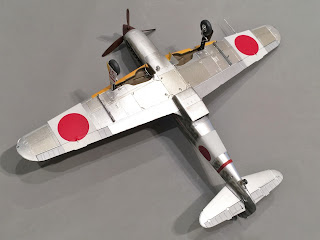 "The kit comes supplied with a single clear side fuselage half. I didn’t use it for obvious reasons. The nice thing about this is that with a little effort, Tamiya should be able to release a new tool “short nosed” Hien or even possibly a Ki-100, since the rest of the airframe was almost identical.

"I hope that you enjoy this article as much as I enjoyed the building and research process. Tamiya hit a home run with this baby and anyone who tells you different needs their head examined! It’s the best Ki-61 in this scale that I have built so far. Now don’t get me wrong, the older Hasegawa kit is still very acceptable and I’m not bashing it by any means. It still looks good when completed, but it is also a product of the early 1990’s and has been eclipsed by this newer offering from Tamiya. Go out and get yourself one of these - you’ll be happy that you did.  Now if they would release that earlier variant of the Hien with the shorter nose,  or even a Ki-100, using this kit as the basis, that would be perfect and I'd happily purchase several of each!"

With special thanks to Louis for sharing these images of his splendid Hien model and the write-up about the kit and build.

What a beautiful Hien! I agree with Louis that Tamiya need to also release the short nosed variants, and ASAP, but fear that with each passing month that seems less and less likely.

Love the metal foil finish. Hope to see more of your work, Louis!

A wonderful representation of the elegant Hien, and a very convincing camouflage.
As Louis says, there are not many examples with enough photo evidence to choose from for the Tei version. I think mine (in two years or so...) will be from the 56th Sentai in NM.