Continuing the retrospective of RAF Flying Review articles on Japanese aviation here is IJN Commander Hajime Sudo's account of his clandestine photo-reconnaissance flights in the Mitsubishi G3M2 'Nell' prior to Peal Harbor as published in the October 1959 issue of the magazine (Vol.XV, No.2). Also included in that issue was a handy cut out and keep Pictorial History of 'Nell' schematic illustrating and describing G3M variants. 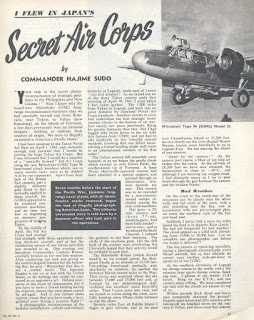 The official designation of 'Nell' was the Type 96 Land-based Attack Aircraft - Kyu Roku Shiki Rikujoh Kohgeki-ki  - 九六式陸上攻撃機, usually abbreviated to Kyu Roku Rikkoh - 九六陸攻. The type began very long range strategic bombing raids against China from Taiwan in August 1937 and continued to serve in the front line role throughout 1942 despite the introduction of the G4M 'Betty'. 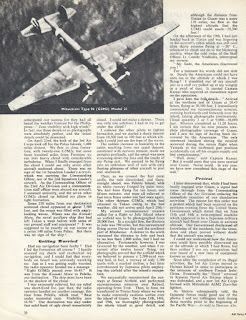 Commander Sudo's account includes his observation that the clandestine aircraft had a 'slightly different grey finish to that normally applied to these aircraft', which is intriguing as grey is not a colour usually associated with the type, the depictions of which often present natural metal, either overall or as the under surfaces on camouflaged aircraft. But note the Hasegawa box art for the  Kanoya Ku 1944 example カヤ-455 in the heading image which appears to represent the under surfaces in typical IJN amber tinted grey rather well (the instructions suggest Mr Color 128 [IJA] Gray-Green which is not quite right in appearance). Was Commander Sudo noticing the difference between standard J3 and the J3 'leaning slightly towards ameiro' introduced with the Zero? 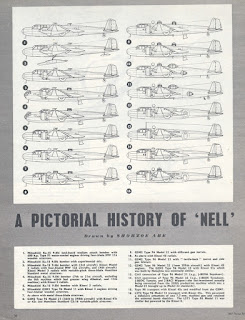 The RAF Flying Review article preceded the appearance of the venerable LS series of G3M kits by seven years, but those ground breaking kits are still available 53 years later under the Arii Microace brand. Although superceded in detail and finesse by the Hasegawa G3M2 kit released in 1997 (and subsequently intermittently re-released in various colour schemes and markings), the LS/Arii kit is still a decent proposition and makes up into a good looking model, being both quick and easy to build as well as inexpensive. One advantage of the LS/Arii family of G3M kits is that it includes the earlier multi-turreted variants as well as the civil/transport variant. A comprehensive 1/48 mixed media kit of the G3M was released in 2007 by Koster Aero Enterprises consisting of vacformed, resin and white metal parts as shown here. Current availability of this kit is unknown but Resin2Detail has since acquired the Koster resources and is reportedly planning to re-release the kits. Another 1/48 vacform kit of 'Nell' is also available from UK manufacturer Sanger at £39.

Great post as always, Nick. Someday I'll be brave enough to tackle the 1/48 Koster vacuform Nell kit. Or, I'll wait long enough that someone will actually produce an injection molded kit of the type. ;-)

Thanks Dan. Oops,I should have mentioned the Koster kit! I'll add it. Regards
Nick

Thank you. Very interesting.
Is it possible using of J3 color before 1940 year?

Thanks Alex. The IJN J3 ash colour (hairo) standard is officially dated to November 1938 within Kaigunkokukiyo Toryu Shikibetsu Hyojun, Kariki 117 Bessatsu’ (Imperial Japanese Navy Headquarters Paint Identification Standard for Naval Aircraft, Supplement to Provisional Regulation 117) but something like it probably existed as a paint before that as Jiro Horikoshi (designer of the Zero) referred to "Navy specification ash green (hairyokushoku) paint" in January 1935. The factory paint applied to the Zero by Mitsubishi and later Nakajima was a special paint for light metals which had the appearance of "J3 ash (gray) colour (haiiro) leaning slightly towards amber colour (ameiro)". In other words it was not identical to the J3 colour standard in appearance but had a slightly yellowish or amber undertone, somewhat similar to the Luftwaffe colour RLM 02 or the more recent RAF Camouflage Beige (Hemp).

J3 is included in the Kariki 117 section of 'Haiiro' colours whereas the colour 'Hairyokushoku' is represented by the 'M' series of colours. However an official table of IJN colours published in March 1944 described J3 as 'Hairyokushoku' so there is inconsistency in the terms used to describe it. In the past J3 has been described by Japanese researchers as similar to the Luftwaffe colour RLM 63 but much lighter. The degree of greenish undertone in the colour is perceived subjectively with some current Japanese research insisting it is a pure 'neutral' grey. But in the early 1970s J3 was compared to Munsell 5 GY 6/1 and FS 16307. So it seems understandable that some might describe it as "ash green colour" - hairyokushoku.

Great thanks Nick!
Just it's a little strange to see the Rikkoh's color as "grey/Gray-Green".
Especially after "Hemp" as under surface colour of Clear Prop!'s A5m2.

"Hemp" as the under surface colour of a camouflaged A5M is certainly strange but I don't know what Clear Prop (or Wingsy) based their depictions on. Natural metal seems more probable but J3 possible.

As for Commander Sudo we can't be sure what he was describing.

Very interesting article! The colour notes are intriguing. I hope someone will build a model like this.