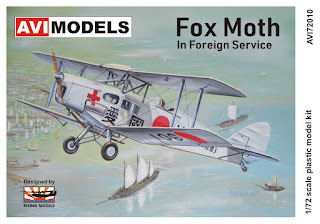 AVI Models (Avi Print, spol.s.r.o) have recently released two 1/72 kits of the De Havilland DH.83 Fox Moth (Macrothylacia rubi), but the release relevant to this blog is AVI72010 'Fox Moth in Foreign Service' which includes two fine Japanese examples. The kit is designed by Rising Models who have also provided the decals. The Fox Moth was basically an early form of 'private jet' or air taxi, based on the Tiger Moth, with a cabin between the engine and cockpit to accommodate 3-4 passengers. 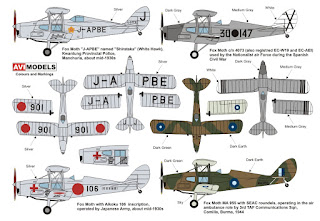 The first Japanese option is a Fox Moth c/n 4013 'Shirataka' (White Hawk) with modified enclosed cockpit of the Kwantung Provincial Police used in Manchuria during the 1930s and registered as J-APBE. This aircraft is depicted as doped silver overall with black registration letters and the yellow (or gold?) Asahikage (Morning Sunlight - emblem of the Japanese Police. This aircraft had been imported to Japan by Mosawa & Co with certificate of airworthiness (CoA) # 3539 issued on 22 July 1932. On 19 February 1937 it was transferred to the Finance Section of the Administration Department (for disposal?) and the registration was cancelled in May 1939. 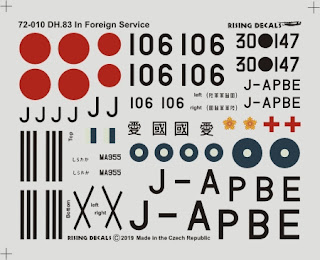 The second Japanese option, possibly c/n 4079 or 4080, is an open cockpit example used by the Imperial Japanese Army in the mid-1930s as an ambulance aircraft on the Yoyogi training ground near Tokyo, also doped silver overall with Aikoku 106 presentation inscription, Hinomaru on wings and fuselage together with a red cross marking on either side of the cowling.  Two Army examples, both used as ambulance aircraft, were imported by Mitsui & Co and issued with CoA's in October 1933. 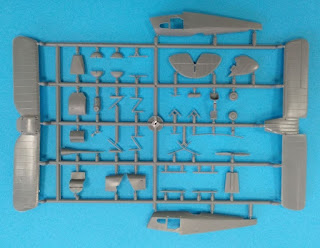 The three Fox Moths imported to Japan inspired the domestic manufacture during 1933-34 of the  Gasuden (Tokyo Gasu Denki Kogyo KK - Tokyo Gas & Electrical Company) KR (Kogata Ryokaku-ki - Small Passenger Aircraft) 1, with twin floats named Chidori-go  (Plover),  powered  by  a  Gasuden  Jimpû 3 160-180hp  seven-cylinder radial engine (Jimpû = sudden wind or gust). Converting the kit with a suitable radial engine would be fairly straightforward but for the provision of markings I hope AVI Models or Rising might already have that in mind!  The KR 1 as a wheeled aircraft could carry three passengers but only two in its floatplane configuration. Seven were built by Gasuden, including the prototype c/n 1 registered as J-BBJI on 23 December 1933.  J-BBKI c/n 2  and J-BFOG were registered to G Matsukata (?) of Koku Jigyo-sha (Aircraft Enterprise Company?) in June 1934 and December 1935 respectively.  J-BBMI & J-BBNI were both operated with floats by NKYKK (Nippon Koku Yuso Kenkyusho) together with the prototype J-BBJI  as an air taxi service from Osaka to Shikoku and Shirahama in 1933-34.  Japanese Aero Engines* states that 12 were built. Two aircraft were later donated to the Taiwan National Defence Volunteer Association (Taiwan Kokubo Gaikai) and two to the Manchurian Coast Guard at Eikou (now Yingkou in China). J-BACO and J-BACP were operated by the newspaper Yomiuri Shimbun (読売新聞) from October 1939, the former going to the IJN in 1944 and the latter burnt at Tamagawa in November 1945. 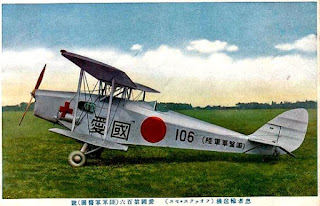 The AVI Models kit offers two further markings options for a Nationalist Air Force Fox Moth, c/n 4073, used during the Spanish Civil War, and an RAF SEAC example MA 955, impressed in India in Ocrober 1942 and later operated by 3rd TAF Communications Sqn at Comilla, Burma in 1944. The Fox Moth kit is crisply moulded in mid-grey plastic on a single sprue frame with an additional frame of crystal-clear transparent parts. The simple instruction sheet is of schematic, exploded view type. Interior detail consists of passenger seats, passenger cabin floor, instrument panel bulkhead with raised details, cockpit floor, pilot seat and control stick. A separate rear fuselage spine is included to build the enclosed cockpit version but the windscreen and canopy for that is a single piece. The side doors are separate clear parts and could be displayed open to show the passenger cabin detail. The undercarriage parts include optional spats not required for the featured subjects. Care will be needed when removing the very fine struts from the sprue and in rigging - there are some unclear aspects to that. Actual photos of the Army ambulance version can be found on the Aikoku website here - scroll down to # 106 in the first column and then click on the yellow characters in the last column ro see the images.

This is an intriguing and neat little kit which should be of interest to Japanese civil enthusiasts as well as collectors of police operated aircraft.  It will also make an interesting line-up with the Amodel Tachikawa KKY-1 kits from 2013. With special thanks to Mirek of Rising Decals for kindly providing the review sample.

As John Cleese once said, "and now for something completely different!" Rising and Dead Design are invaluable to Japanese aviation modelers. I like Zeros and Spitfires as much as the next person, but if Mirek puts a completed one on a display table at a show, he will probably hear someone say "So...what's that?"
Kudos to Rising, and thanks for the info, Nick! Great post.

Thanks for this info, Nick.