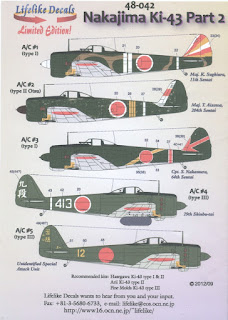 48-042 contains markings for the following five subjects as shown:-

Recommended kits are the Hasegawa Ki-43-I and Ki-43-II, the Arii (ex-Otaki) Ki-43-II and the Fine Molds Ki-43-III Ko. As usual for Lifelike there are copious and illuminating notes provided for each subject together with the references used and a clear indication of speculation regarding colours.

With special thanks to Keishiro Nagao of Lifelike Decals for kindly sending the updated sheet for review.

Nice subjects! Nr. '413" is new to me. Unusual to see such large numbers on the fuselage of a JAAF subject. Is it related to the construction number?