John Haas continues to share the kit-less creation of his prodigious, peachy and pioneering 'Patsy' in 1/48 scale (no less). Part One can be found here.  In his own words then. 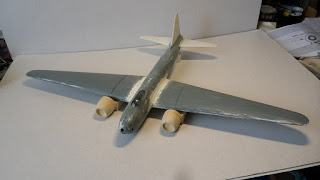 "First I would like to thank all the readers for their kind comments ! The fuselage and wing were ready for joining. The first thing to do was to cut the completed single piece wing into two halves. I then drilled four holes in them to fit some lengths of metal pin (large paperclips work fine here) to make a solid connection to the fuselage. Those massive wing halves are quite heavy! 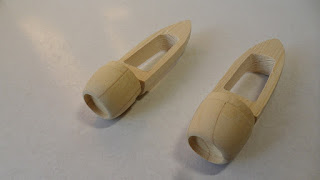 "The next step was to fabricate two engines and their nacelles. Fortunately I had some leftover pieces of very fine grain wood, which is excellent material for making round parts. I have no lathe so everything has to be done by hand with much filing and sanding. It was also a challenge to make the two streamline fairings on the top of the wings. Really a trial and error job to get it right. 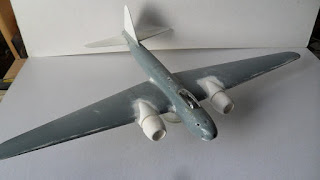 "But at this stage we were getting somewhere. The main parts came together and it really started to look like a Patsy. After checking all the connections and puttying with grey paint, it was time for the smaller parts. 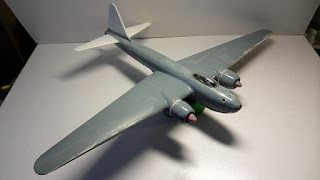 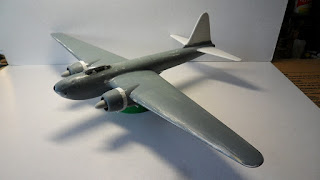 "The spinners are made from some drop tanks and luckily this time I a found two main wheels of an old F-111 in the spares box which were just the right size! I even found a Lightning nosewheel which after some modification fitted as the tailwheel. The undercarriage legs had to be sturdy, so they are made out of two sizes of aluminium tubing with some plastic details. 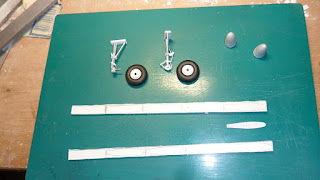 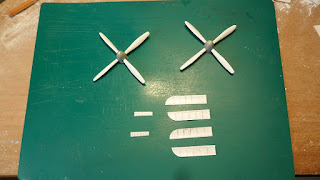 "Then I had to make some more engine parts, two cooling fans, cowling gills, wheel doors and after much studying of the photographs I figured out what the exhausts should look like. And finally followed an exercise in patience, filing and sanding eight propeller blades. 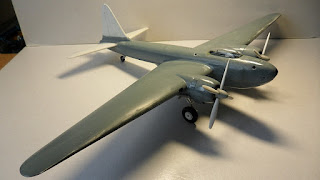 "Up to the next work-in-progress report - part three!"

With special thanks to John for sharing this wonderful example of expert scratch-building. Those two engine cowlings and nacelles in wood - made without a lathe - are masterpieces in their own right!

.... speechless! Your dedication to even the minutest detail in scratch like the gear legs is unbeatable. Such a build would take me 4 years, and I have no idea how to model with wood. Simply fabulous John!

A true labor of love. I agree with Nick 100% on the nacelles, spectacular!

Simply wonderful on every level.

This is exciting to watch come together, thanks for showing us, John! I'm curious whether there were any 1/48 engines and cooling fans (Jack?) that were suitable matches among 1/48 kits that you were tempted to incorporate? Even if so, I guess that could get expensive. Nick, thanks for the inside view of an epic project.

It was easy with this engine, the cooling- fan blocks any view on the engine, therefore I did not install one.
I know the engines in 1/48 are expensive and most times I need different ones,
so I build them myself. It is not that difficult, I build many of them for my Fokker models.

The cooling-fan blocks all view on the engien, so I did not install one.
When I need one, I make them myself. Most times I need different ones, so I
build them myself.

Another fabulous creation, John! Looking forward to the final result :)