In response to the recent feature on Zegeye's Kyofu Model and discussion of the Kyofus operated by 936 Ku and the 22nd Special Base Force in the East Indies, Jacob Terlouw has kindly shared these interesting photos and useful information. 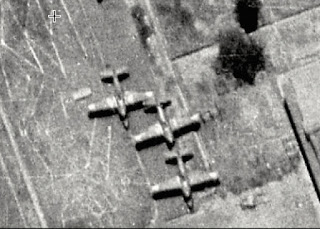 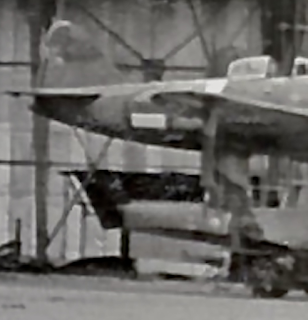 Photo # 2 - note missing (?) rear transparency and white 'patch' at rear of cockpit. Is this the modified access door?

From Jacob: "No doubt- at least three N1K1's were found at Surabaya at the end of the war, at the end of 1946 one was shipped aboard the carrier Karel Doorman-1 to the Netherlands along with an Aichi E13A1b (Jake). In the spring of 1947 they arrived in Amsterdam. When taken aboard in Surabaya they sported AURI markings - as almost all Japanese planes left at Surabaya, why the planes were re-painted with Hinomarus I can only guess. The fate of these planes is not exactly known- I think the Rex went to the Technical University at Delft but the fate of the Jake was probably serving as a target for shooting practice! Nothing of both planes remains. There is one thing I saw on the few photos of the Rex's - all three of them had the early type exhausts - just like the prototype." 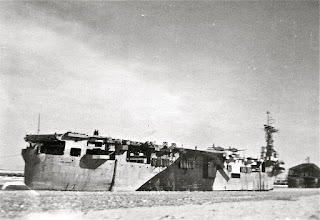 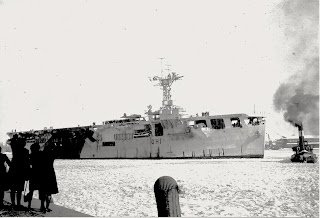 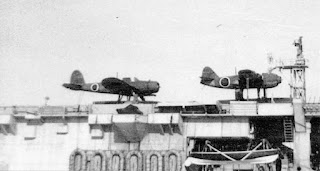 One of these Kyofu (see Photo # 2 above) has a rectangular white looking 'patch' near the cockpit, and a similarly shaped 'patch' is also seen on the rear fuselage of another Aichi Jake at Surabaya (not shown), positioned by the rear crew position. Is this the access door made to adapt Kyofu # 21 as a two seater? 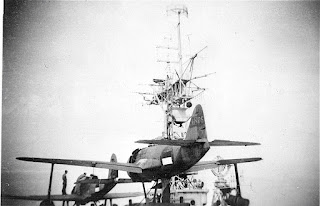 The Kyofu on the deck of the carrier (above) displays the tail code 'A1-105', identifying it as an aircraft of 936 Ku, part of the 13th Air Fleet, 10th (South West) Area Fleet. The alloted aircraft numbers for the East Indies Detached Unit were reportedly 61-100 so this particularly aircraft appears supernumerary to that. The main unit, based at Singapore and Penang, used white for tail codes (1-30) but the detached units (Indo-China, 31-60, and East Indies) used colours at the discretion of the commanding officer. 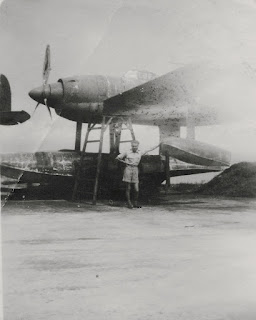 The photo above is marked on the back as being taken at Penang. Malaya in April 1946 and notes that this seaplane was 'supposed to be the fastest in the world'. Pity the tail markings, if any, are not visible!

With special thanks to Jacob for sharing these photos and information.

Thanks for helping fill in this missing piece of aviation history!

Wonderful pictures and great history! Thanks Jacob and Nick.
Regarding the white patch inside the hinomaru (if that's what you're referring to), I see another bar above the white one slightly darker than the hinomaru red. Could this be a national insignia painted over the hinomaru, e.g. red & white for Indonesia?

Thanks. No I meant the angular white patch showing in photo # 2 just behind the cockpit (and above the level of the wing, which I think is an 'irregular quadrilateral'(!). The rectangular white patch within the Hinomaru is part of the AURI insignia, a red over white rectangle.

Thanks for sharing, Jacob & Nick.

Fascinating photos and much appreciated, thanks.

thank you for sharing - David